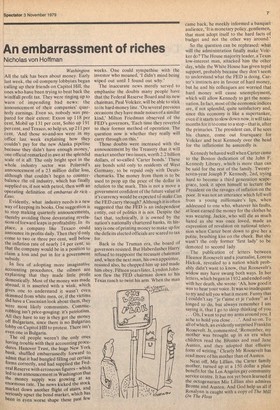 An embarrassment of riches

Washington All the talk has been about money. Early Last week, the oil company lobbyists began calling up their friends on Capitol Hill, the ones who have been trying to beat back the windfall profit tax. They were ringing up to warn of impending bad news: the announcement of their companies' quarterly earnings. Even so, nobody was prepared for their extent: Exxon up 118 per cent, Mobil up 131 per cent, Sohio up 191 percent, and Texaco, so help us, up 211 per cent. 'And those so-and-sos were in my office last week explaining how they couldn't pay for the new Alaska pipeline because they didn't have enough money,' one official remarked in awe at the splendid scale of it all. The only bright spot in the whole industry sector was Polaroid's announcement of a 23 million dollar loss, although that couldn't begin to counterbalance the oil industry, which has finally supplied us, if not with petrol, then with an operating definition of embarras de rich Esso, Evidently, what industry needs is a new way of keeping its books. One suggestion is to stop making quarterly announcements, thereby avoiding those devastating revelations of forward leaps in profitability. In its place, a company like Texaco could announce its profits daily. Then they'd only come to two or three per cent, well below the inflation rate of nearly 14 per cent, so that the company would be in a position to claim a loss and put in for a government subsidy.

In lieu of adopting more imaginative accounting procedures, the oilmen are explaining that they made little profit domestically. Most of the money was made abroad, it is asserted with a wink, which gives one to understand it wasn't even Skimmed from white men, or, if the victims did have a Caucasian look about them, they were most likely communists. Commie" robbing isn't price-gouging: it's patriotism. All they have to say is they got the money off Bulgarians, since there is no Bulgarian lobby on Capitol Hill to protest. There isn't even one in Bulgaria. The oil people weren't the only ones having trouble with their accounting proce dures. Hanover Trust, the huge New York bank, shuffled embarrassedly forward to admit that it had bungled filling out certain forms correctly, and had supplied the Federal Reserve with erroneous figures which led to an announcement in Washington that the money supply was growing at an enormous rate, The news kicked the stock market down another flight of stairs, and seriously upset the bond market, which has been in eyen worse shape these past few weeks. One could sympathise with the investor who moaned, '1 didn't mind being wiped out until I found out why.'

The inaccurate news merely served to emphasise the doubts many people have that the Federal Reserve Board and its new chairman, Paul Volcker, will be able to stick to its hard-money line. 'On several previous occasions they have made noises of a similar kind,' Milton Friedman observed of the FED's governors, 'Each time they reverted to their former method of operation. The question now is whether they really will carry through on this.'

Those doubts were increased with the announcement by the Treasury that it will market another two issues, worth 2.2 billion dollars, of so-called 'Carter bonds.' These are bonds sold only to residents of West Germany, to be repaid on,ly with Deutschemarks. The money from them is to be used to prop up the price of the dollar in relation to the mark. This is not a move a government confident of the future value of it's currency would be expected tamake.Can the FED carry through? Although it is often suggested that the FED is an independent entity, out of politics it is not. Despite the fact that, technically, it is owned by the nation's nationally chartered banks, its history is one of printing money to make up for the deficits elected officials are scared to tax for.

Back in the Truman era, the board of governors resisted. But Haberdasher Harry refused to reappoint the recusant chairman and, when the next man, his own appointee, resisted also, he chopped him up and made him obey. Fifteen years later, Lyndon Johnson flew the FED chairman down to his Texas ranch to twist his arm. When the man came back, he meekly informed a banquet audience, 'It is monetary policy, gentlemen, that must adopt itself to the hard facts of budget and not the other way around.'

So the question can be rephrased: what will the administration finally make Volcker do? The House majority leader, a Texas low-interest man, attacked him the other day, while the White House has given tepid support, probably because they don't seem to understand what the FED is doing. Carter's instincts are in favour of hard money, but he and his colleagues are worried that hard money will cause unemployment, which will allow Kennedy to get the nomination. In fact, most of the economic indices are, if not splendid, quite satisfactory and, since this economy is like a supertanker, even if it starts to slow down now, it will take months for it to come to a stop —that is, after the primaries. The president can, if he sees his chance, come out foursquare for Volcker and beat Kennedy over the head for the inflationist he assuredly is.

Kennedy behaved well when Carter came to the Boston dedication of the John F. Kennedy Library, which is more than can be said for the rest of the family. Twentyseven-year Joseph P. Kennedy, 2nd, trying hard to become a third generation scapegrace, took it upon himself to lecture the President on the ravages Of inflation on the poor. It was not an utterance which fell well from a young millionaire's lips, when addressed to one who, whatever his faults, at least earned the money for the clothes he was wearing. Jackie, who will die as much hated as she was once loved, made an expression of revulsion on national television when Carter bent down to give her a polite, brushing kiss on the cheek. But she wasn't the only former 'first lady' to be demoted to second lady.

The publication of letters between Eleanor Roosevelt and a journalist, Lorena Hickok, revealed to a nation which probably didn't want to know, that Roosevelt's widow may have swung both ways. In her letters, which began in 1932 and ended only with her death, she wrote: 'A h, how good it was to hear your voice. It was so inadequate to try and tell you what it meant. Funny that I couldn't say "je t'aime et je t'adore" as I longed to do, but always remember I am saying it, that I go to sleep thinking of you . . Oh,! want to put my arms around you. I ache to hold you close. . . '. And so on. To all of which, an evidently surprised Franklin Rcosevelt. Jr, commented, 'Remember, my mother was brought up in an era when children read the Bkintes and read Jane Austen, and they adopted that effusive form of writing.' Clearly Mr Roosevelt has read more of his mother than of Austen.

Next off, Miz Lillian, the Carter family mother, turned up at a 150 dollar a plate benefit for the Los Angeles gay community service centre. It has not yet been learned if the octogenarian Miz Lillian also admires Bronte and Austen. And God help us all if Rosalynn is caught with a copy of The Mill On The Floss