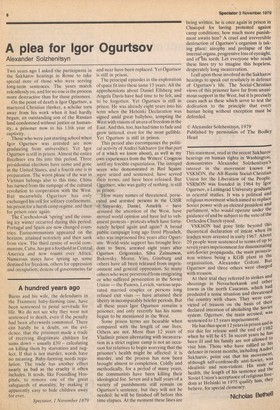 Page 8, 3 November 1979 — This statement, read at the recent Sakharov hearings on human
Close

This statement, read at the recent Sakharov hearings on human

rights in Washington, demonstrates Alexander Solzhenitsyn's interest in the movement known as VSKhON, the All-Russia Social-Christian Union for the Liberation of the People. VSKhON was founded in 1964 by Igor Ogurtsov, a Leningrad University graduate in oriental studies. It was a political and religious movement which aimed to replace Soviet power with an elected president and parliament, who would operate under the guidance of and be subject to the veto of the Orthodox Church synod. VSKhON had gone little beyond this theoretical declaration of intent when Its leaders were arrested in early 1967. About 20 people were sentenced to terms of up to seven years imprisonment for disseminating anti-Soviet propaganda, the main prosecution witness being a KGB plant in the organisation, Alexander Gidoni. But Ogurtsov and three others were charged with treason. At their trial they referred to strikes and shootings in Novocherkassk and other towns in the north Caucasus, which had produced a tense situation and threatened the country with chaos. They were convicted of treason on the basis of their declared intention of abolishing the Soviet system. Ogurtsov, the main accused, was sentenced to 15 years imprisonment. He has thus spent 12 years in prison and is not due for release until the end of 1982 when he will be 45. In recent years he has been ill and his family are not allowed to visit him. Those who have rallied to his defence in recent months, including Andrei Sakharov, point out that his movement, although self-confessedly anti-Soviet, was idealistic and non-violent. His state of health, the length of his sentence and the Soviet Union's acceptance of religious free theYdom at Helsinki in 1975 qualify him, believe, for special clemency.