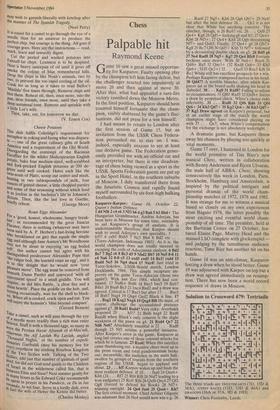 ity for Kasparov. Faulty opening play by the champion left him facing defeat, but the challenger reacted too impulsively at move 26 and then against at move 30. After that, what had appeared a sure-fire victory vanished down the Moscow Metro. In the final position, Kasparov should have counted himself fortunate that the cham- pion, visibly shattered by the game's fluc- tuations, did not press for a win himself.

I had meant to return to London after the first session of Game 15, but an invitation from the USSR Chess Federa- tion persuaded me to stay on. I was, indeed, especially anxious to see at least one decisive game. The Federation gener- ously provided me with an official car and an interpreter, but there is one disadvan- tage of chess being viewed as a sport in the USSR. Sports Federation guests are put up in the Sport Hotel, in the southern suburbs of Moscow. I duly transferred there from the futuristic Cosmos and rapidly found myself surrounded by six-foot-high hulking footballers.

i been here in Moscow for some time, ostensibly

A dramatic game, but Kasparov threw away his chances by playing too quickly at vital moments.

Game 17 over, I hastened to London for the world premiere of Tim Rice's new

musical Chess, written in collaboration with Benny Andersson and Bjorn Ulvaeus, the male half of ABBA. Chess, showing consecutively this week in London, Paris, Stockholm, Hamburg and Amsterdam, is

inspired by the political intrigues and personal dramas of the world cham- pionship matches of 1972, 1978 and 1981. It was strange for me to witness a musical based so closely on my own experiences from Baguio 1978, the latter possibly the most exciting and eventful world cham- pionship of all time. The premiere, held at the Barbican Centre on 27 October, fea- tured Elaine Page, Murray Head and the massed LSO complete with glockenspiel - and judging by the tumultuous audience reaction, Time Rice has another hit on his hands.

Game 18 was an anti-climax, Kasparov forcing a draw when he stood better. Game 19 was adjourned with Karpov on top but a draw was agreed immediately on resump- tion. There has now been a world record sequence of draws in Moscow.