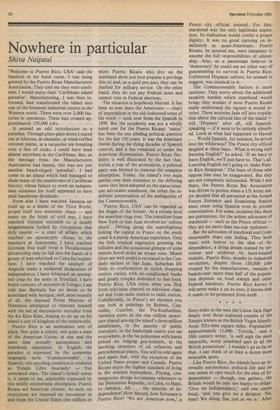 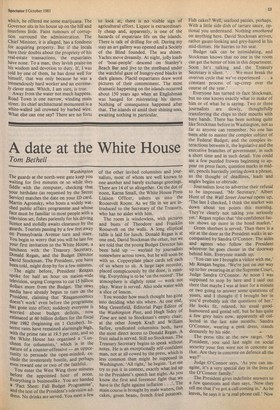 `Welcome to Puerto Rico, USA' said the handout in my hotel room. I was being greeted by the Puerto Rican Manufacturers Association. They told me they were confident I would enjoy their 'Caribbean island paradise'. Manufacturing, I was then informed, had transformed the island into one of the foremost industrial centres in the Western world. There were over 2,000 factories in operation. These had created approximately 150,000 jobs.

It seemed an odd introduction to a paradise. Through plate-glass doors I stared out at hibiscus, at oleander, at wind-ruffled coconut palms, at a turquoise sea breaking over a line of rocks. I could have been almost anywhere in the Caribbean. But, as the message from the Manufacturers Association had hinted, this was not just another beach-ringed 'paradise'. I had come to an island which had managed to elude many of the maelstroms of Caribbean history; whose failure to wrest an independent existence for itself appeared to have paid handsome dividends.

From afar I have watched Jamaica set itself up as a leader of the Third World, propel itself into economic chaos — and teeter on the brink of civil war; I have watched Guyana succumb to a deadly megalomania fuelled by corruptions that defy reason — a state of affairs which reached an apocalyptic climax in the massacre at Jonestown; I have watched Grenada free itself from a Duvalieresque dictatorship only to fall into the hands of a group of men who look to Cuba for inspiration; I have watched the sandspit of Anguilla make a unilateral declaration of independence; I have witnessed an attempted coup by the army in Trinidad; I have heard rumours of secession in Tobago; I am told that Barbuda has no desire to be associated with Antigua; and, most recently of all, the deposed Prime Minister of Dominica attempted to reinstate himself with the aid of mercenaries recruited from the Ku Klux Klan, hoping to set up on his island a sort of kingdom of the underworld.

Puerto Rico is an anomalous sort of place. Not quite a colony, not quite a state of the American Union; at one and the same time proudly autonomous and hopelessly dependent. In English the paradox is expressed by the somewhat enigmatic term 'Commonwealth'. In Spanish, this puzzling condition is rendered as 'Estado Libre Asociado' — free associated state. The island's hybrid status is, it seems to me, admirably expressed by this mildly oxymoronic description. Puerto Ricans are American citizens. As such, no restrictions are imposed on movement to and from the United States (the million or more Puerto Ricans who live on the mainland show just how popular a privilege this is) and, as a quid pro quo, they can be drafted for military service. On the other hand, they do not pay Federal taxes and cannot vote in Federal elections.

The situation is hopelessly blurred. It has been so ever since the Americans — chary of imperialism in the old-fashioned sense of the word — took over from the Spanish in 1898. But the perplexity was not a wholly novel one for the Puerto Ricans: 'status' has been the one abiding political question for the last 150 years. It was the dominant theme during the dying decades of Spanish control; and it has remained so under the American dispensation. Puerto Rican flexibility is well illustrated by the fact that, within a year of the annexation, a political party was formed to clamour for complete absorption. Today, the island's two main parties owe their existence to the differing views they have adopted on the status issue: one advocates statehood, the other the indefinite perpetuation of the ambiguities of the Commonwealth.

'Puerto Rico, USA' can be regarded as the slogan of the former. At a certain level the assertion rings true. The transition from New York to San Juan involves no `culture shock'. Driving along the superhighway linking the capital to Ponce on the south coast is a purely American experience. Only the lush tropical vegetation greening the hillsides and the occasional glimpse of some remote hovel strike an errant note. Miami (they say with pride) is recreated in the Condado section of San Juan. Suburban life finds its confirmation in stylish shopping centres replete with air-conditioned banks and gaudy temples dedicated to fast-food. Puerto Rico, USA exists when you flick from television channel to television channel and from radio station to radio station. Unbelievably, in Ponce's art museum you can look at paintings by Rubens, Constable, Courbet, the Pre-Raphaelites. America exists in the one million motorcars shared among the island's three million inhabitants, in the paucity of public transport, in the basketball courts you see everywhere, in the fat policemen with hands poised on bulging gun-holsters, in the smoking chimneys of oil refineries and petrochemical plants. You will be told again and again that, with the exception of the United States proper and Canada, Puerto Ricans enjoy the highest standard of living in the western hemisphere. Pitying, contemptuous shrugs accompany references to the Dominican Republic, to Cuba, to Haiti, to Jamaica. Ah . . . the miseries of Independence! How blessed, how fortunate is Puerto Rico! `We are American now,' a Ponce city official insisted. For him, statehood was the only legitimate aspiration. Its realisation would confer a proper dignity. It was no good carrying on indefinitely as quasi-Americans. Puerto Ricans, he assured me, were impatient to assume the full responsibilities of citizenship. Also, as a passionate believer in `democracy' he could see no other way of guaranteeing its survival in Puerto Rico. Unfettered Hispanic culture, he seemed to suggest, was inimical to it.

The Commonwealth faction is more cautious. They worry about the additional taxation burden which statehood would bring; they wonder if most Puerto Ricans really understand the rigours it would involve. These anxieties fade off into trepidation about the cultural fate of the island — still `Hispanic' after all, still Spanishspeaking — if it were to be entirely absorbed. Look at what had happened to Hawaii . . . Would Spanish, for instance, be driven into the wilderness? The Ponce city official laughed at these fears. `What is wrong with learning English?' he asked. `If we have to learn English, we'll just have to. That's all. Learning English isn't going to make Puerto Rico disappear.' The fears of those who oppose him may be exaggerated. But they are not completely unfounded. While I was there, the Puerto Rican Bar Association was driven to protest when a US Army major decided that all personnel at the Armed Forces Entrance and Examining Station must cease using Spanish even in private conversation. For some, incidents like these are portentous; for the ardent advocates of statehood — such as the Ponce official — they are no more than tea-cup typhoons.

But the advocates of statehood and Commonwealth share one feeling. They both react with horror to the idea of Independence, a dying dream stained by terrorism and undercut by hard-headed realities. Puerto Rico, despite its industrial revolution, despite those 150,000 jobs created by the manufacturers, remains a basket-case: more than half of the population depends on food stamps and other Federal handouts. Puerto Rico knows it will never make it on its own; it knows that it needs to be protected from itself.

Sixty miles to the west the Union Jack flaps limply over those scattered crumbs of the Empire known as the British Virgin Islands. Area: fifty-nine square miles. Population: approximately 11,000. 'Tortola,' said a 19th century writer, `is well nigh the most miserable, worst inhabited spot in all the British possessions'. I wouldn't go as far as that. I can think of at least a dozen more miserable spots.

Like Puerto Rico, the islands have an internally autonomous political life and no one seems to care much for the idea of Independence — though, one gathers, the British would be only too happy to oblige. 'Give we Independence,' said one canny local, `and you give we a dictator. No, mart! We doing fine just as we is.' After which, he offered me some marijuana. The Governor sits in his house up on the hill and interferes little. Faint rumours of corruption surround the administration. The Chief Minister, it is alleged, has a fondness for acquiring property. But if the locals have their doubts about the propriety of his real-estate transactions, the expatriates have none. To a man, they lavish praise on his wisdom and devotion to duty. If, 1 was told by one of them, he has done well for himself, that was only because he was a tremendously hard worker and an extremely clever man. Which, I am sure, is true.

Away from the water not much happens. Road Town is one narrow, winding main street. Its chief architectural monument is a White-walled jail crowned by barbed wire. What else can one say? There are no forts to look at; there is no visible sign of agricultural effort. Liquor is extraordinarily cheap and, apparently, is one of the hazards of expatriate life on the islands. There is talk of drilling for oil. During my stay an art gallery was opened and a Society of the Blind founded. The sea shines. Yachts move dreamily. At night, jolly loads of 'boat-people' descend on Stanley's Beach Bar and jive to the steelband under the watchful gaze of hungry-eyed blacks in dark glasses. Placid expatriates draw word pictures of their contentment. The most dramatic happening on the islands occurred about 150 years ago when an Englishman was hanged for mistreating his slaves. Nothing of consequence happened after that. The islands sit amid their shining seas, awaiting nothing in particular.