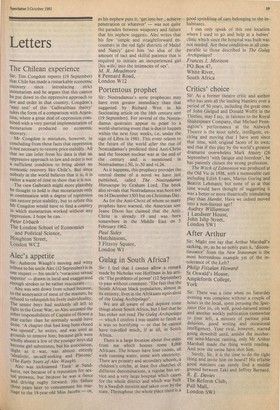 Sir: Auberon Waugh's moving and witty tribute to his uncle Alec (12 September) is in one respect — his uncle's `voracious sexual appetite, drawn in lurid and exaggerated enough strokes to be rather inaccurate.

Alec was sent down from school because, to the annoyance of most of the masters, he refused to relinquish his lively individuality. The senior boys had suddenly all left to fight in the Great War, so Alec assumed the sober responsibilities of Captain of House a Year earlier than he normally would have done. 'A chapter that had long been closed was opened', he writes, and was used as grounds to remove him; because girls were Wholly absent a few of the younger boys. did become girl substitutes, but his association, Slight as it was, was almost entirely un-self-seeking and Platonic' (The Early Years of Alec Waugh). Alec was nicknamed 'Tank' at Sandhurst, not because of a reputation for.sexual prowess, but because he was a fierce and driving rugby forward. His failure three years later to consummate his marriage to the 18-year-old Miss Jacobs — or, as his nephew puts it, 'get into her , achieve penetration or whatever' — was not quite the paradox between weaponry and failure that his nephew suggests. Alec writes that his few 'simple and straightforward encounters in the red light districts of Main2 and Nancy' gave him 'no idea of the amount of tact and skilful patience that is required to initiate an inexperienced girl [his wife] into the intimacies of sex'.