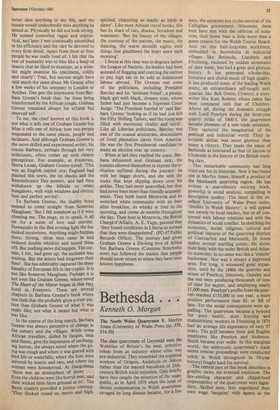 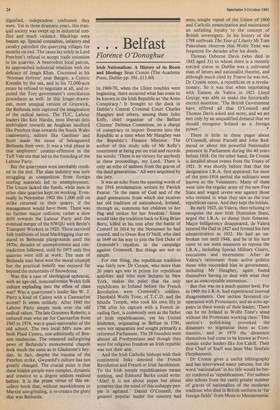 The North Wales Quarrymen R. Merfyn Jones (University of Wales Press pp. 359, £14.50) The slate quarrymen of Gwynedd were the Wobblies of Britain's far west, primitive rebels from an industry whose ethic was pre-industrial. They resembled the scattered workers of Oregon, Andalusia or Nievre rather than the massed battalions of 20thcentury British trade unionism. Only briefly have they caught the attention of the wider public, as in April 1979 when the issue of decent compensation to Welsh quarrymen ravaged by lung disease became, for a few days, the apparent key to the survival of the Callaghan government. Otherwise, these men have met with the oblivion of isolation; their home base is little more than a game reserve for the Welsh Tourist Board. And yet this half-forgotten workforce, embedded in Snowdonia in industrial villages like Bethesda, Llanberis and Ffestiniog, enclosed by sodden mountains of slate waste, has had a great and glorious history. It has generated scholarship, literature and choral music of high quality. It has produced many of the leading Welsh poets; an extraordinary self-taught antiquarian like Bob Owen; Croesor; a storywriter like Kate Roberts whose talent has been compared with that of Chekhov. Above all, during the dramatic struggle with Lord Penrhyn during the three-year quarry strike of 1900-3, the quarrymen became pioneers of a new trade unionism. They captured the imagination of the political and industrial world. Their inevitable defeat was more glorious than many a victory. They made the name of Bethesda as honoured as that of Jarrow or Clydeside in the history of the British working class.

This remarkable community has long cried out for its historian. Now it has found one in Merfyn Jones, himself a product of the Merioneth quarrying region. He has written a marvellously exciting book, powerful in social analysis, compelling in descriptive quality. The latest in the excellent University of Wales Press series, 'Studies in Welsh History', it will appeal not merely to local readers, but to all concerned with labour relations and with the dynamics of social conflict. In sketching the economic, social, religious, cultural and political features of the quarrying districts of Caernarfon and Merioneth, Dr Jones makes several startling points. He shows their links with the wider British and Atlantic economy; in no sense was this a 'remote' backwater. Nor was it always a depressed area. For long, it witnessed great expansion, until by the 1880s the quarries and mines of Penrhyn, Dinorwic, Oakeley and the rest were producing thousands of tons of slate for export, and employing nearly 15,000 men. Penrhyn's profits from his quarries reached £133,000 in one year, a more positive performance than BL or BR of late. Yet the social consequences were appalling. The quarrymen became a byword for poor health, slum housing and malnutrition; workers in Ffestiniog in 1875 had an average life expectancy of only 37 years. The gulf between them and English employers like Penrhyn and AsshetonSmith became ever wider. In this marginal world, the embryonic quarrymen's trade union (whose proceedings were conducted solely in Welsh throughout its 50-year history) fought hard for survival. The central part of this book describes in graphic terms the eventual explosion. The law-abiding character and chapel-bred respectability of the quarrymen were legendary. Skilled men, they negotiated their own wage 'bargains' with agents as the dignified, independent craftsmen they were. Yet in three dramatic years, this tranquil society was swept up in industrial conflict and much violence. Blacklegs were beaten up. Special constables, infantry and cavalry patrolled the quarrying villages for months on end. The cause lay solely in Lord Penrhyn's refusal to accept trade unionism in his quarries. A benevolent local patron, he approached industrial relations with the delicacy of Jengis Khan. Cocooned in his 'Norman fortress' near Bangor, a Cymric Kremlin by the sea, and in his 72,000-acre estate he refused to negotiate at all, and rejected the Tory government's conciliation procedures as well. In this longer-drawnout, more unequal version of Grunwick, the Bethesda men captured the imagination of the radical nation. The TUC, Labour leaders like Keir Hardie, most liberals (less ambivalent towards an Anglican landlord like Penrhyn than towards the South Wales coalowners), editors like Gardiner and Scott made the cause of beleaguered Bethesda their own. It was a vital phase in that employers' counter-offensive in the Taff Vale era that led to the founding of the Labour Party.

But the quarrymen were inevitably crushed in the end. The slate industry was now struggling as competition from foreign roofing materials led to unemployment. The Union lacked the funds, while men in other slate quarries kept on working. Eventually in November 1903 the 1,000 still on strike returned to their quarry, if the management would have them. There was no further major collision; rather a slow drift towards the Labour Party and the eventual merger of the NWQU with Bevin's Transport Workers in 1923. There survived folk traditions of local blacklegging that endured in Bethesda playgrounds until the 1970s; decades of unemployment and contradiction followed, until by 1975 only five quarries were still at work. The men of Bethesda may have won the moral triumph but the practical benefit was enjoyed far beyond the mountains of Snowdonia.

Was this a case of ideological upheaval, with an age-old, nonconformist Welsh folk culture exploding into the ethos of class war? Was a quarrymen's leader like W. J. Parry a kind of Castro with a Caernarfon accent? Is seems unlikely. After 1945 the Labour Party simply took over the old radical values. The late Goronwy Roberts, a cultured man who sat for Caernarfon from 1945 to 1974, was a quasi-nationalist of the old school. The two local MPs now are both Plaid Cymru, one admittedly of Bennite tendencies. The veneered unforgiving pews of Bethesda's monumental chapels look much the same as in Gladstone's heyday. In fact, despite the trauma of the Penrhyn strike, Gwynedd's culture has not greatly changed. The crucial point is that these hidden people were complex, dynamic and creative to a degree seldom realised before. It is the prime virtue of this excellent book that, without mawkishness or Marxist axe-grinding, it re-creates the glory that was Bethesda.