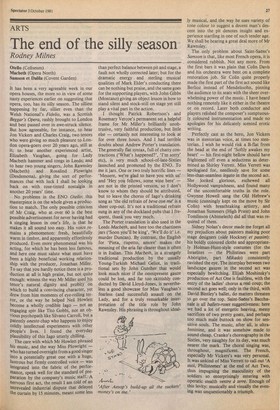 The end of the silly season

Rodney Milnes Otello (Coliseum) Macbeth (Opera North) Samson et Dalila (Covent Garden) It has been a very agreeable week in our opera houses, the more so in view of some nasty experiences earlier on suggesting that opera, too, has its silly season. The silliest happening by far, sillier even than the Welsh National's Fidelio, was a Scottish Beggar's Opera, rashly brought to London and best passed over in awe-struck silence. But how agreeable, for instance, to hear Jon Vickers and Charles Craig, two tenors who were giving so much pleasure to London opera-goers over 20 years ago, still at it; to hear another experienced artist, Elizabeth Vaughan, going for Lady Macbeth hammer and tongs in Leeds; and to hear two young singers, John Rawnsley (Macbeth) and Rosalind Plowright (Desdemona), giving the sort of performances that with luck I shall be looking back on with rose-tinted nostalgia in another 20 years' time.

No problems in the ENO Otello: this masterpiece is on the whole given a production to match. The only possible criticism of Mr Craig, who at over 60 is the best possible advertisement for never having had a singing lesson in one's life, is that he makes it all sound too easy. His voice remains a phenomenon: fresh, beautifully warm in timbre, and apparently effortlessly produced. Even more phenomenal was his acting, for which he has been less famous, and here one must salute what must have been a highly beneficial working relationship with the producer, Jonathan Miller. To say that you hardly notice there is a production at all is high praise, but not quite enough; witness the way Mr Miller used his tenor's natural dignity and probity on Which to build a convincing character, yet drew from him moments of eye-rolling terror, or the way he helped Neil Howlett become a wholly credible Iago — not an engaging spiv like Tito Gobbi, nor an obvious psychopath like Silvano Carroli, but a Patently onesto chap who happens to enjoy coldly intellectual experiments with other People's lives. I found the everyday Plausibility of this lago utterly chilling.

The care with which Mr Howlett phrased his music, and the way Miss Plowright — who has turned overnight from a good singer into a potentially great one with a huge, lustrous but firmly controlled voice — was Integrated into the fabric of the performance, speak well for the standard of preparation by the company's music staff. A nervous first act, the result I am told of an Unrevealed industrial dispute that delayed the curtain by 15 minutes, meant some less than perfect balance between pit and stage, a fault not wholly corrected later; but for the dramatic energy and sterling musical qualities of Mark Elder's conducting there can be nothing but praise, and the same goes for the supporting players, with John Gibbs (Montano) giving an object lesson in how to stand silent and stock-still on stage yet still play a vital part in the action.

I thought Patrick Robertson's and Rosemary Vercoe's permanent set a helpful frame for Mr Miller's brilliantly unobtrusive, very faithful production, but little else — certainly not interesting to look at for over three hours. And I had terrible doubts about Andrew Porter's translation. The generally flat syntax, full of chatty contractions ('What's happened?', 'I'm sorry' etc), is very much school-of-late-Sixties launched and promoted by the ENO. To me it jars. One or two truly horrific lines — `Messere, we're glad to have you with us' and 'Hey you fellows, some wine here' — are not in the printed version, so I don't know to whom they should be attributed, but to leave the chorus of Iago's drinking song as 'the old refrain of beva con me' is a sheer cop-out. It's not a traditional refrain sung in any of the dockland pubs that I frequent, thank you very much.

The Porter translation is also used in the Leeds Macbeth, and here too the chattiness jars (`Soon you'll be king', 'We'll do it' i.e. murder Duncan). By contrast, the English for 'Pieta, rispetto, amore' makes the meaning of the aria far clearer than it often is in Italian. This Macbeth, in a strangely traditional production by the usually Young-Turkish Michael Geliot, in traditional sets by John Gunther that would look much nicer if the omnipresent gauze could be lost, and far too skittishly conducted by David Lloyd-Jones, is nevertheless a good showcase for Miss Vaughan's fearless (and successful) assault on the Lady, and for a truly remarkable interpretation of the title role by John Rawnsley. His phrasing is throughout ideal ly musical, and the way he uses variety of tone colour to suggest a decent man's descent into the pit denotes insight and experience startling in one of such tender age. We shall be hearing a great deal more of Mr Rawnsley.

The only problem about Saint-Saens's Samson is that, like most French opera, it is considered rubbish. Not any more. From the first bars it was plain that Colin Davis and his orchestra were bent on a complete restoration job. Sir Colin quite properly made the first part of the first act sound like Berlioz instead of Mendelssohn, pinning the audience to its seats with the sheer overwhelming power of the music. I have heard nothing remotely like it either in the theatre or on record. Later both conductor and players relished the composer's sumptuously coloured instrumentation and made no apologies for his delicately scented erotic writing.

Perfectly cast as the hero, Jon Vickers was in stentorian voice, at times too stentorian. I wish he would risk a B-flat from the head at the end of 'Softly awakes my heart' — his first-night bellow should have frightened off even a seductress as determined as Shirley Verrett. Miss Verrett was apologised for, needlessly save for some less-than-seamless legato in the second act. She looked glorious, eschewed all Hollywood vampishness, and found many of the uncomfortable truths in the role. Gwynne Howell sang the Old Hebrew's music (cunningly kept on the move by Sir Colin) with breathtaking artistry, and Jonathan Summers (High Priest) and John Tomlinson (Abimelech) did all that was required of them.

Sidney Nolan's decor made me forget all my prejudices about painters making poor stage designers (vide Hockney et passim): his boldly coloured cloths and appropriately Holman-Hunt-style costumes (for the Israelites — the Philistines were part Aborigine, part Mikado) consistently ravished the eye. The interplay between two landscape gauzes in the second act was especially bewitching. Elijah Moshinsky's production of Act One is faultless, with the entry of the ladies' chorus al real coup; the second act goes well; only in the third, with David Bintley's ballet, do matters threaten to go over the top. Saint-Saens's Bacchanale is all ballets-roses suggestiveness: here we had a lot of energetic heaving, messy sacrifices of two pretty goats, and perhaps too much male buttock on show for sensitive souls. The music, after all, is ultrafeminine, and it was somehow made to sound cheap. Cranko's choreography in the Sixties, very naughty for its day, was much nearer the mark. The choral singing was, throughout, magnificent. The French, especially Mr Vickers's was very personal. It was unkind of Miss Verrett to call out 'A moi, Philisteenes' at the end of Act Two, thus impugning the masculinity of the soldiers so enterprisingly entering with operatic stealth ventre a terre. Enough of this levity: musically and visually the evening was unquestionably a triumph.