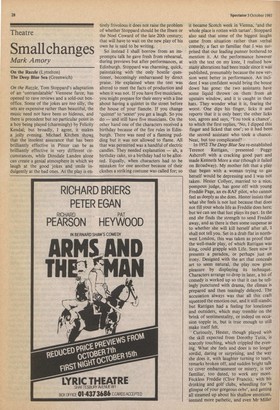 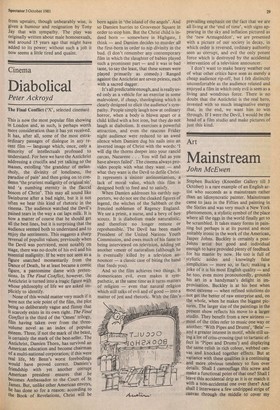 On the Razzle (Lyttelton)

The Deep Blue Sea (Greenwich) On the Razz/e, Tom Stoppard's adaptation of an 'untranslatable' Viennese farce, has opened to rave reviews and a sold-out boxoffice. Some of the jokes are too silly, the sets are expensive rather than beautiful, the music need not have been so hideous, and there is precedent but no particular point in a boy being played (charmingly) by Felicity Kendal; but broadly, I agree, it makes a jolly evening. Michael Kitchen shows that the insolent assurance that has been brilliantly effective in Pinter can be as brilliantly effective in very different circumstances, while Dinsdale Landen alone can create a genial atmosphere in which we laugh at the good jokes and smile indulgently at the bad ones. As the play is en tirely frivolous it does not raise the problem of whether Stoppard should be the Ibsen or the Noel Coward of the late 20th century; that will have to wait on the new play of his own he is said to be writing.

So instead I shall borrow from an impromptu talk he gave fresh from rehearsal, during previews but after performances, at Edinburgh. Stoppard was charming, quick, painstaking with the only hostile questioner, becomingly embarrassed by direct praise. He explained when the text was altered to meet the facts of production and when it was not. If you have five musicians, you might prepare for their entry with a line about having a quintet in the street before the house of your fiancee. If you change 'quintet' to 'sextet' you get a laugh. So you do — and still have five musicians. On the other hand one of the characters received a birthday because of the fire rules in Edinburgh. There was need of a flaming pudding but it was not allowed to flame. All that was permitted was a handful of electric candles. They needed explanation — ah, a birthday cake, so a birthday had to be allotted. Equally, when characters had to be mistaken for one another because of their clothes a striking costume was called for; so it became Scotch week in Vienna, 'and the whole place is rotten with tartan'. Stoppard also said that some of the biggest laughs came from situation rather than verbal comedy, a fact so familiar that I was surprised that our leading punner bothered to mention it. At the performance however with the text on my knee, I realised how many alterations had been made since it was published, presumably because the new version went better in performance. An incident I was confident would bring the house down has gone: the two assistants have some liquid thrown on them from an upstairs window, and it is caught in their hats. They wonder what it is, fearing the worst. One dips his finger, licks it and reports that it is only beer; the other licks too, agrees and says, 'You took a chance', to which the first replies, `No, I dipped this finger and licked that one'; so it had been the second assistant who took a chance. Neat, but too complicated?

In 1952 The Deep Blue Sea re-established Terence Rattigan, presented Peggy Ashcroft with a cracking good part and made Kenneth More a star (though it failed on Broadway). My mother felt that a play that began with a woman trying to gas herself would be depressing and I was not taken. Hester Collyer, married to a nice, pompous judge, has gone off with young Freddie Page, an ex-RAF pilot, who cannot feel as deeply as she does. Hester insists that what she feels is not lust because that does not fill your whole life as Freddie does hers; but we can see that lust plays its part. In the end she finds the strength to send Freddie away, and as there is then some suspense as to whether she will kill herself after all, I shall not tell you. Set in a drab flat in northwest London, this was taken as proof that the well-made play, of which Rattigan was king, could grapple with Life. Seen now it presents a paradox, or perhaps just an irony. Designed with the art that conceals art to seem natural, the play now gives pleasure by displaying its technique. Characters arrange to drop in later, a bit of comedy is worked up so that it can be tellingly punctured with drama, the climax is prepared and then teasingly delayed. The accusation always was that all this craft squeezed the emotion out, and it still stands; but Rattigan had a feeling for loneliness and outsiders, which may tremble on the brink of sentimentality, or indeed on occasion topple in, but is true enough to still make itself felt.

Curiously, Hester, though played with the skill expected from Dorothy Tutin, is scarcely touching, which crippled the evening. What she feels and does is no longer sordid, daring or surprising, and the way she does it, with laughter turning to tears, remarks broken off, and sudden bright talk to cover embarrassment or misery, is too familiar, too dated, to work any more. Feckless Freddie (Clive Francis), with his drinking and golf clubs, wheedling for 'a glimpse of your gorgeous orbs', and getting all steamed up about his shallow emotions, seemed more pathetic, and even Mr Miller from upstairs, though unbearably wise, is given a humour and resignation by Tony Jay that win sympathy. The play was originally written about male homosexuals, and around 15 years ago that might have added to its power; without such a jolt it now seems a little tired and quaint.