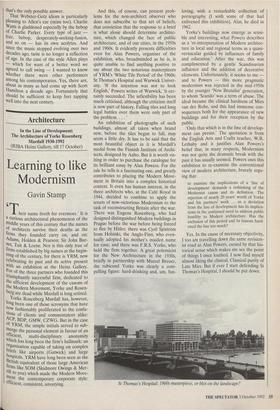 In the Line of Development: The Architecture of Yorke Rosenberg Mardall 1930-1992

'Their name liveth for evermore.' It is a curious architectural phenomenon of the middle years of this century that the names of architects survive their deaths as the firms they founded carry on, and on: Adams, Holden & Pearson; Sir John Bur- net, Tait & Lorne. Nor is this only true of firms established by big names at the begin- ning of the century, for there is YRM, now celebrating its past and its active present with an exhibition at the Heinz Gallery. For of the three partners who founded this triumphantly successful firm, dedicated to the efficient development of the canons of the Modern Movement, Yorke and Rosen- berg are dead while Mardall is long retired. Yorke Rosenberg Mardall has, however, long been one of those acronyms that have ROW fashionably proliferated to the confu- sions of clients and commentators alike: ACP, BDP, GMW, CZWG. But in the case of YRM, the simple initials served to sub- merge the personal element in favour• of an efficient, multi-disciplinary anonymity Which has long been the firm's hallmark: an organisation capable of taking on complex briefs like airports (Gatwick) and large hospitals. YRM have long been seen as the British equivalent of those large American firms like SOM (Skidmore Owings & Mer- rill to you) which made the Modern Move- ment the contemporary corporate style: efficient, consistent, unvarying. And this, of course, can present prob- lems for the non-architect observer who does not subscribe to that set of beliefs, that conviction that the response to a brief is what alone should determine architec- ture, which changed the face of public architecture, and of our cities, in the 1950s and 1960s. It evidently presents difficulties even for Alan Powers, organiser of the exhibition, who, broadminded as he is, is quite unable to find anything positive to say about the two notorious masterpieces of YRM's 'White Tile Period' of the 1960s: St Thomas's Hospital and Warwick Univer- sity. 'If the intention was not to look English,' Powers writes of Warwick, 'it cer- tainly succeeded. The inflexibility has been much criticised, although the criticism itself is now part of history. Falling tiles and long legal battles over them were only part of the problem. . . . '

An exhibition of photographs of such buildings, almost all taken when brand new, before the tiles began to fall, may seem a little dry. It has to be said that the most beautiful object in it is Mardall's medal from the Finnish Institute of Archi- tects, designed by Aalto. But it is worth vis- iting in order to purchase the catalogue for its brilliant essay by Alan Powers. For the tale he tells is a fascinating one, and greatly contributes to placing the Modern Move- ment in Britain into a complex historical context. It even has human interest, in the three architects who, at the Café Royal in 1944, decided to combine to apply the tenets of now-victorious Modernism to the task of reconstructing Britain after the war. There was Eugene Rosenberg, who had designed distinguished Modern buildings in Prague before the war before being forced to flee by Hitler; there was Cyril Sjostrom from Helsinki, the Anglo-Finn, who even- tually adopted his mother's maiden name for ease; and there was F.R.S. Yorke, who held the firm together. A great polemicist for the New Architecture in the 1930s, briefly in partnership with Marcel Breuer, the rubicund Yorke was clearly a com- pelling figure: hard-drinking and, um, fun- loving, with a remarkable collection of pornography (I wish some of that had enlivened this exhibition). Alas, he died in 1962.

Yorke's buildings now emerge as sensi- ble and interesting, what Powers describes as a 're-interpretation of Modern architec- ture in local and regional terms as a quasi- vernacular guided by influences of family and education.' After the war, this was complimented by a gentle Scandinavian influence and the addition of decorative elements. Unfortunately, it seems to me and to Powers — this more pragmatic modernism was rejected in the mid-1950s by the younger 'New Brutalist' generation, to whom Scando' was a term of abuse. The ideal became the clinical hardness of Mies van der Rohe, and this had immense con- sequences both for the appearance of new buildings and for their reception by the public.,o nly that which is in the line of develop- ment can persist.' The quotation is from the English Arts and Crafts teacher, W.R. Lethaby and it justifies Alan Powers's belief that, in many respects, Modernism was not quite the dramatic break with the past it has usually seemed. Powers uses this exhibition to re-examine the conventional view of modern architecture, bravely argu- ing that

to examine the implications of a 'line of development' demands a rethinking of the Modernist canon and its definition. The rejection of nearly 20 years' worth of Yorke and his partners' work ... as a deviation from the line of development has its implica- tions in the continued need to address public hostility to Modern architecture. Has the exclusion of this period and its lessons hard- ened the line too much?

Yes. In the cause of necessary objectivity, I too am travelling down the same revision- ist road as Alan Powers, cursed by that his- torical sense which makes me see the point of things I once loathed. I now find myself almost liking the clinical, Classical purity of Late Mies. But if ever I start defending St Thomas's Hospital, I should be put down.

St Thomas's Hospital: 1960s masterpiece, or blot on the landscape?