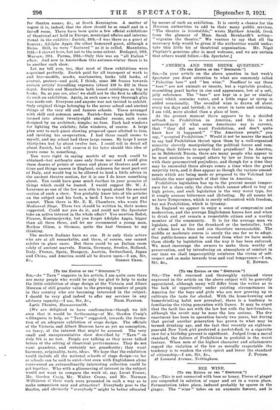 " AMERICA AND THE DRINK QUESTION."

SIR,—In your article on the above question in last week's Spectator you draw attention to what are commonly called " Palestine bees" and " bee wine." Needless' to say these " bees " are not animals or insects, but a vegetable product, resembling pearl barley in size and appearance, but of a soft, jelly substance. The " bees " are kept in a jar or 'similar vessel which contains water, and a little sugar or syrup is added occasionally. The so-called wine is drawn off about every ten days and bottled; it is sweet in taste and contains, I am told, more alcohol than a glass of beer.

At the present moment there appears to be a decided setback to Prohibition in America, and this is not extraordinary if what some Americans say is correct, that " they did not want Prohibition, and don't quite know how it happened." " The American people," you say, " accepted Prohibition." Would it not be nearer the mark to say had Prohibition thrust upon them by a well-organized minority cleverly manipulating the political forces and com- pelling their fellows to accept their prejudices? In America, as in Bolshevik Russia, there are many people who appear to be most anxious to compel others by law or force to agree with their preconceived prejudices, and though for a time they may be successful there always comes a time when the great majority turn, and it does appear as though the various amend- ments which are being made or proposed to the Volstead law indicate the near approach of that time in America.

Prohibition legislation has up to the present meant temper- ance for a class only, the class which cannot afford to buy at high prices, and such legislation is the very worst type, for it simply arouses bitterness and ill-feeling. By all means let us have Temperance, which is surely self-control with freedom, but not Prohibition, which is tyranny.

In England we appear to enjoy a sense of compromise and moderation, and the average Englishman knows how and when to drink and yet remain a respectable citizen and a worthy member of the community. It is for the average man we legislate, and not for the drunkard or the teetotaller, both of whom have a bias and are therefore unreasonable. The middle or moderate course is surely the one for us to adopt. Our public-houses must be rescued from what we have made them chiefly by legislation and the way it has been enforced. We must encourage the owners to make them worthy of preservation, and by introducing an atmosphere of comfort in our inns we shall imperceptibly reinforce the virtue of self- respect and so make towards true and real temperance.—I am,