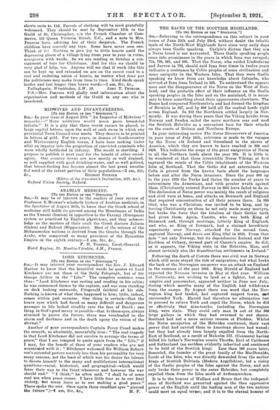 [To THE EDITOR OF THE " SPECTATOR."] SIR,—It may interest your correspondent the Rev. J. Edward Harlow to know that the beautiful words he quotes re Lord Kitchener are not those of the Daily Telegraph, but of Sir George Arthur in the "Life." The complete sentence runs thus: "Lord Kitchener was resting and reading in his cabin; he was summoned thence by the captain, and was seen standing on deck looking outwards, Fitzgerald faithful at his side. Nothing is known of what then happened to him; little, indeed, comes within just surmise. One thing is certain—that the brave eyes which had faced so many difficult and dangerous passages in life looked steadily into the face of Death : one thing in God's good mercy is possible—that to those eyes, always strained to pierce the future, there was vouchsafed in the storm and darkness and in the death agony the vision of the eternal."

Another of your correspondents Captain Percy Creed makes the remark, so absolutely, mournfully true: " The real tragedy is that Lord Kitchener did not survive to arrange the terms of peace," that I am tempted to quote again from the " Life," if I may, for the benefit of those of your readers who are not acquainted with it : " Kitchener welcomed Sir William Robert- son's extended powers scarcely less than his personality for very many reasons, not the least of which was his desire for leisure to devote himself to the many and multifarious international questions—racial, historical, and geographical—which would force their way to the front whenever and however the war should end." "I think," he often said, "I shall be of some real use when peace comes. I have little fear as to our final victory, but many fears as to our making a good peace." There spoke the seer. Once again those steadfast eyes "pierced