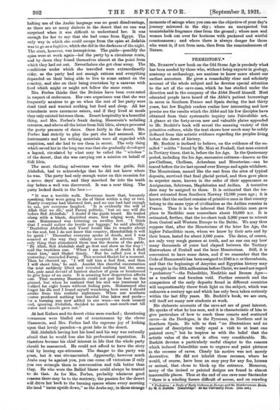 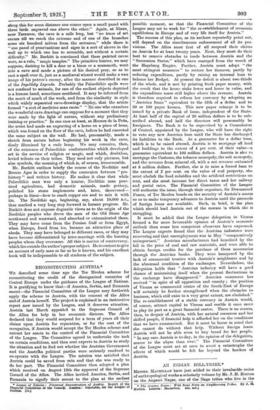 Ma. BURICITT'S new book on the Old Stone Age is precisely what has been needed by those who, without being experts in geology, anatomy or archaeology, are anxious to know more about our earliest ancestors. He gives a remarkably clear and scholarly account of the whole subject and he devotes special attention to the art of the cave-man, which he has studied under the direction and in the company of the Abbe Merril himself. Most educated people have heard of the Abbe's patient burrowings in eaves in Southern France and Spain during the last thirty years, but few English readers realize how interesting and how precise are the results which the Abbe and his few disciple§ have obtained from their systematic inquiry into Palaeolithic art. A glance at the forty-seven new and valuable plates appended to Mn Burkitt's book will reveal the amazing variety of this primitive culture, while the text shows how much may be safely deduced from this- artistic evidence regarding the peoples living before the dawn of history.

Mr. Burkitt is- inclined to believe, on the evidence- of the so- called- " eoliths " found by Mr. Moir at Foxhall, that man existed in Tertiary times, that is, before the Ice Age. In the Quaternary period, including the Ice Age, successive cultures—known as the pre-Chellean, Chellean, Acheulean and Mousterian—can be traced before the ice last spread over Europe and again withdrew. The Mousterians, named like the rest from the sites of typical deposits, survived that final glacial period, and then gave place to superior races, known in the- order of their appearance as Aurignacian, Solutrean, Magdalenian and Azilian. A tentative date may be assigned to these. It is estimated that the ice- sheet retreated• from Southern Norway 12,000 year" ago ; it is known that the earliest remains of primitive man in that country belong to the same type of civilization as the Azilian remains in France. Thus it is to be inferred that Palaeolithic man gave place to Neolithic man somewhere about 10,000 B.C. It is estimated, further, that the ice-sheet took 5,000 years to retreat from Central and Western Europe to the Baltic. We may thus suppose that, after the Mousterians of the later Ice Age, the higher Palaeolithic races, whom we know by their arts and by their bones, lasted for about 5,000 years. The dates, of course, are only very rough guesses at truth, and no one can say how many thousands of years had elapsed between the Tertiary flintworkers of Foxhall and the later Mousterians. Still, it is convenient to have some dates, and if we remember that the Code of ilammnrabi has been assigned to 2340 B. C. or thereabouts, and that the beginnings of Assyrian and Egyptian history may be sought in the fifth millennium before Christ, we need not regard " prehistory "—the Palaeolithic, Neolithic and Bronze Ages— as a trackless and formless. void. Further research and the comparison of the early deposits found in different countries will unquestionably throw fresh light on the subject, which was unknown a century ago and which has only been taken seriously within the last fifty years. Mr. Burkitt's book, we are sure, will itself set many new students at work.

His elaborate accounts of the cave-art are of great interest. Ho speaks of what he has seen, and it is characteristic of him to give particulars of how to reach these remote and scattered caves in the Dordogne, in the Pyrenees, in Northern and in Southern Spain. He tells us that " no illustrations and no amount of description really equal a visit to at least one painted cave," but he inspires us with the belief that the artistic value of the work is often very considerable. Mr. Burkitt devotes a particularly useful chapter to the reasons which induced Palaeolithic man to engrave and paint pictures in the recesses of caves. Clearly his motive was not merely decorative. He did not inhabit those- recesses, where he would, of course, have been an easy prey for any foe, human or animal, that chose to block up the entrance. Moreover, many of the incised or painted designs are found in almost inaccessible places. Thus at the end of one cave near Santander "there is a winding fissure difficult of access, and on crawling

• Prehistory : a Study of Early Cultures in Europe and the Mediterranean Basin. By 14. C, Burkitt. (Cambridge: At the University Press. (35s, net.]

along this for some distance one comes upon a small panel with three birds engraved one above the other." Again, at Niaux, near Tarasoon, the cave is a mile long, but "no trace of art *emirs till we reach the extreme end of one of the branches some six hundred metres from the entrance," while there is " one panel of punctuations and signs in a sort of alcove in the wall up to which one has to scramble, not without a certain difficulty." Mr. Burkitt is convinced that these painted caves were, as a rule, " magic temples." The primitive hunter, we may suppose, desiring to kill a deer or a bison or a mammoth, went into a cave and made a picture of his desired prey, so as to cast a spell over it, just as a mediaeval wizard would make a wax image of his patron's enemy, after the manner described in one of the Ingoldsby Legends. Probably the Palsaolithie spells were not confined to animals, for one of the earliest objects depicted is a human hand, sometimes mutilated. It may be inferred from the merit of much of the work, and from the similarity in style which widely separated cave-drawings display, that the artists formed " a sort of medicine man caste." " No one who examines the wonderful cave drawings can suppose for a moment that they were made by the light of nature, without any preliminary training or practice." In one case at least, at Homes de la Pena, the artist had made an engraving of a horse on a piece of bone, which was found on the floor of the cave, before he had executed the same subject on the wall. Ho had, presumably, made a sketch from nature before beginning his work in the cave, dimly illumined by a rude lamp. We may conceive, then, of the existence of Palaeolithic confraternities which developed art in the service of religion or magic, and which, doubtless, levied tribute on their tribes. They used not only pictures, but also symbols, the meaning of which is, of course, irrecoverable.

Mr. Burkitt outlines briefly the course of the Neolithic and Bronze Ages in order to supply the connexion between " pre- history "- and written history. Ho makes it clear that while Palnolithio man was only a hunter, Neolithic man prac- tised agriculture, had domestic animals, made pottery, polished his stone implements and, later, discovered— perhaps in Sinai—how to smelt copper ore and to mix it with tin. The Neolithic ago, beginning, say, about 10,000 s.c., thus marked a very long step forward in human progress. Mr. Burkitt does not express dogmatic views as to the origin of the Neolithic peoples who drove the men of the Old Stone Age northward and westward, and absorbed or exterminated them. They may have come from the Persian Gulf or from Egypt, when Europe, freed from ice, became an attractive place of abode. They may have belonged to different races, or they may have become differentiated by inter-marriage with the hunting peoples whom they overcame. All this is matter of controversy, which lies outside the author's proper subject. Ho is content.to give an account of early man so far as he is known, and his excellent book will be indispensable to all students of the subject.