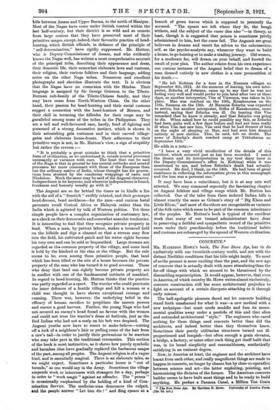 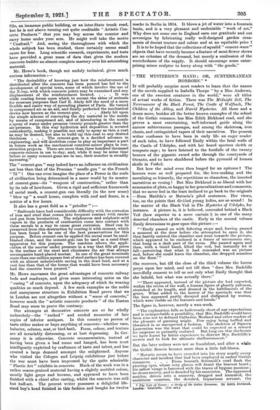 MR. HARRISON HOWE'S book, The New Stone Age, has to do exclusively with our twentieth-century world, and not with the distant Neolithic conditions that his title might imply. To most of us the present is more exciting than the past, and the new age of concrete that is actually dealt with more stimulating than the far-off things with which we seemed to be threatened by the dissembling superscription. It would appear, however, that even in America, of which country Mr. Howe writes almost bxclusively, concrete construction still has some architectural prejudice to fight on account of a certain disrepute attaching to it through early misuse.

The half-apologetic pioneers dared not let concrete building stand forth unashamed for what it was—a new method with a new technique—but must needs muddle and fuss its monu- mental qualities away under a pastiche of this and that alien and outmoded architectural " style." The engineers who cared nothing for these things used concrete better than did the architects, and indeed better than they themselves knew. Sometimes their purely utilitarian structures turned out ill- proportioned and lumpish—but often enough a grain elevator, a bridge, a factory, or some other such thing got itself built that was, in its broad simplicity and reasonableness, aesthetically satisfying in an eminent degree. .

Now, in America at least, the engineer and the architect have learnt from each other, and really magnificent things are made to happen in concrete, no longer by chance but by close co-operation between science and art—the latter exploiting, pointing, and harmonizing the dictates of the former. The American concrete builder seems to have built most things and to be ready to build anything. He prefers a Panama Canal, a Million Ton Grain

Silo, an immense public building, or an inter-State trunk road, but he is not above turning out quite creditable " Artistic Con- crete Products " that you may buy across the counter and carry home under your arm. He might well take the motto

" Unafraid." And, seeing the thoroughness with which the whole subject has been studied, there certainly seems small cause for fear. Long scientific research, experiments, and tests have provided a great mass of data that gives the modern concrete-builder an almost complete mastery over his astonishing

"The desirability of knowing just how the reinforcement is distributed after the concrete has been poured has led to the development of special tests, some of which involve the use of the X-ray, with which concrete joints may be examined and any displacement of the reinforcement located. . . . It was while coating forms upon which to mount the skins of animals for museum purposes that Carl E. Akely felt the need of a more flexible and easier way of spreading plaster of Paris. He turned to compressed air as an aid, and finally perfected the mechanical device now known as the cement-gun. . . . Akely hit upon the simple scheme of conveying the dry material to the nozzle by means of compressed air, and of introducing in the nozzle a spray of water under pressure twenty pounds greater than the air-pressure. In this way hydration and deposition is secured coincidently, making it possible not only to spray as thin a coat as may be desired, but also to build up this coat to any desired thickness. . . . The cement-gun is a decided advance in engineering, and will doubtless come to play as important a part in future work as the mechanical concrete-mixer plays in con- struction projects. There are more than three hundred thousand concrete-mixers in use to-day, and, while it may be some time before so many cement-guns are in use, their number is steadily increasing."

The " cement-gun " may indeed have an influence on civilization not less than that of the Prussian " needle gun " or the French " 75 " ! One can even imagine the place of a Power in the scale of civilization being determined is a saner world by its muster of cement-guns--its " weapons of construction," rather than by its tale of howitzers. Given a rigid and sufficient framework of metal mesh, a cement-gun can literally (in the new sense) " blow up " a small house, complete with roof and floors, in a matter of a few hours.

"Railroads have had considerable difficulty with the corrosion of iron and steel that comes into frequent contact with smoke and gas from locomotives. The sulphurous and sulphuric-acid vapors in the products of combustion come into contact with these metals in a way to cause great corrosion. Steel can be preserved from this destruction by coating it with cement, which has been found to be one of the best preservatives for this purpose. Before cement can be applied the metal must be sand- blasted clean, and the cement-gun can be used as a sand-blast apparatus for this purpose. The machine allows the appli- cation of the mortar under pressure in a way that fills all pores in the surface of the steel and eliminates the air that always accompanies hand-placed mortar. In one of the great terminals more than one million square feet of steel surface has been covered with an almost unbelievable saving in the dead load, and at a cost less than that of the forms that would have been necessary had the concrete been poured."

Mr. Howe canvasses the great advantages of concrete railway beds and roadways, and gives some interesting notes on the

" curing " of concrete, upon the adequacy of which its wearing qualities so much depend. A few such examples as the noble and anonymous structure in Exhibition Road prove that we in London are not altogether without a " sense of concrete," however much the " artistic concrete products " of the Euston Road may seem to prove the contrary.

Our attempts at decorative concrete are so far wholly melancholy—the " sucked " and eroded memories of late copies of inferior antiques. In this country no person of

taste either makes or buys anything of concrete—whether vase, baluster, column, seat, or bird-bath. Form, colour, and texture

are all invariably distressing, or at best depressing. In Ger- many it is otherwise. Concrete ornamentation, instead of having been given a bad name and hanged, has been most intelligently exploited by craftsmen of taste and talent, and has created a large demand amongst the enlightened. Anyone who visited the Cologne and Leipzig exhibitions just before

the war must have been impressed by the quite admirable " Plastic Art " exhibits in.concrete. Much of the work was in a rather coarse-grained material having a slightly mottled colour, mostly light greys and browns, and appeared to have been finished with a chisel after casting, whilst the concrete was still but half-set. The present writer possesses a delightful life-

sized boy's head finished in this fashion and bought for twelve

marks in Berlin in 1914. It blows a jet of water into a fountain basin, and is a very pleasant and undeniable " work of art." Why does not some one in England earn our gratitude and our sovereigns by fabricating really well-designed garden orna- ments of decent texture and colour and at an equitable price It is to be hoped that the collections of squalid " cement-ware " objects that have recently become a feature of most flower shows are no criterion of the demand, but merely a confession of the wretchedness of the supply. It should encourage some enter- prising minor sculptor to hurry along with " the goods."