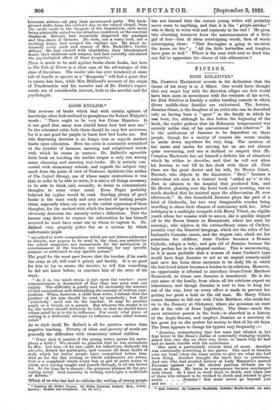 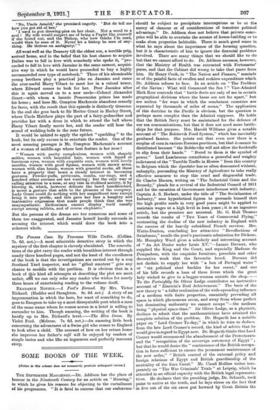 RICH RELATIVES.* Mu. ComProir Mao/EN= reveals in his dedication that the theme of his story is in A Minor. One would have thought that any major key with the direction allegro con brio would have been more in accordance with the contents of his novel, for Rich Relatives is !rankly a rather bustling comedy in which divers middle-class families are caricatured. The heroine, Jasmine Grant, is the daughter of an artist who can be described only as having been a " sport " in the family in which he was born, for, although he dies before the beginning of the book, the reader gathers that his Bohemian temperament was entirely unlike that of his conventional " rich relatives." It is the misfortune of Jasmine to be dependent on these people, though for a variety of reasons she seems unable to settle down anywhere for very long. The motives of her aunts and uncles for moving her on are not always quite convincing, and one is inclined to suspect that Mr. Compton Mackenzie has set himself a definite list of situations which he wishes to describe, and. that he will not allow his heroine to rest till he has dealt with them all. First there are the groat doctor and his wife, Sir Hector Grant, Baronet, who objects to the diminutive " Bart." because a malevolent wit once in a visitors' book "added an s ' to the Bart. in allusion to the hospital that produced him, and Sir Hector, gloating over the hotel book next morning, was so much shocked that he insisted upon the abbreviation Bt. ever afterwards." In this household Jasmine plays the part of a kind of Cinderella, her two very disagreeable cousins being unwilling to share their chances of matrimony with her. After indulging in a midnight escapade with Harry Vibart, an eligible youth whom her cousins wish to annex, she is quickly shipped off to the Enoas Grants at Hampstead, where her aunt by marriage, who rejoices in the extraordinary name of Cuckoo, presides over the Oriental hangings, which are the relics of her husband's Consular career, and the Angora cats, which are her substitute for children. Aunt Cuckoo becomes a Roman Catholic, adopts a baby, and gets rid of Jasmine because the baby prefers her to ite adopted mother. This is unconvincing, as it is more probable that a woman of Aunt Cuckoo's type

would have kept Jasmine to act as an unpaid nursery-maid and save her from those moments in its daily life in which the best loved infant becomes a burden to its relations. However, an opportunity is afforded to introduce Great-Uncle Matthew Rounoivell, to whose care Jasmine is transferred. He is the rich miser of the. family, from whom all his relations expect an inheritance, and though Jasmine is sent to him to keep her out of the way, later on every effort is made to prevent her getting too great a hold on the old man. Mr. Harry Vibart causes Jasmine to fall out with Uncle Matthew, who sends her

on to the Deanery at Sikhester, where she possesses an aunt who is the wife of Dean Lightbody. The Dean—much the most attractive person in the book—is absorbed in a history of the Anglo-Saxons, and employs Jasmine as a secretary to her great joy as she prefers his society to that of his six boys.

The Dean appears to change his typists very frequently :-

"Jasmine, remembering that her aunt had alluded in her first letter to the Dean's dislike of constantly changing typists, asked him one day on their way down to lunch why he had had so much trouble with his secretaries.

One used a particularly vicious kind of scent. Another was continually scratching at her garter. One used to breathe over my head when she came across to give me what she had been doing. Another thought she knew how to punctuate. And one who had studied history at Lady Margaret's quoted Freeman against me ! My clerical position forbade me to swear at them. My brain in consequence became surcharged with blood. So I used to work them to death, and when one of them who refused to be worked to death and refused to give notice . . . Jasmine ! this must never go beyond you and me. . . . '

No, Uncle Arnold," -she promised eagerly. But do tell -me how you got rid of her.'

' I used to .put drawing-pins on her chair. Not a word to a soul ! My would suspect me of being a Papist like yourself if she found out, and the Bishop, who now thinks I'm mad, would then be sure of it. Never let a bishop be sure of any- thing. Be thrives on ambiguity.' "

All went well at the Deanery till the eldest son, a terrible prig, arrived home, and in the belief that his best chance to acquire Italian was to fall in love with somebody who spoke it, " pro- ceeded to fall in love with Jasmine in the same earnest, acquisi- tive way in which he would have proceeded to buy a highly recommended new type of notebook." Three of his abominable young brothers play a practical joke on Jasmine and cause

the ever-useful Hurry Vibart to meet her in a ruined tower, where Edward comes to look for her. Poor Jasmine after this is again moved on to a new uncle—Colonel Alexander Grant—with whom a lunatic Pomeranian prince has made his home ; and here Mr. Compton Mackenzie abandons comedy for farce, with the result that this episode is distinctly tiresome. In the end she goes back to Sir Hector Grant in Harley Street, where Uncle Matthew plays the part of a fairy-godmother and provides her with a dress in which to attend the ball where Harry Vibart finally meets her, and the reader will hear the

sound of Wedding-bells in the near future.

It would be unkind to apply the epithet " sparkling " to the boa, but its only excuse is to entertain the reader. One of the most amusing passages is Mr. Compton Mackenzie's account of .a woman of middle-age whose best feature is her nose !

" Women with pretty complexions, women with shapely ankles, women with beautiful hair, women with liquid or luminous eyes, women with exquisite ears, women with lovely mouths, women -with good figures, women with snowy arms, women with slim hands, women with graceful necks, all these have a property that bears .a steady interest in becoming gestures. Powder-puffs, petticoats, combs, ear-rings, and a hundred other excuses are not wanting ; but the only -way of calling attention to a nose, at any rate in civilized society, is by blowing it, which, however delicate the laced handkerchief, is never .a gesture that -adds to the pleasure of the company. Lady Grant could do nothing with her magnificent nose except bring it into profile, end this gave her face a haughty and inattentive expression that made people think that she was unsympathetic. Enthusiasm cannot display itself nasally except among rabbits, and of course elephants."

But the persons of the drama are too numerous and some of them too exaggerated, and Jasmine herself hardly succeeds in arousing the interest which would draw the book into a coherent whole.