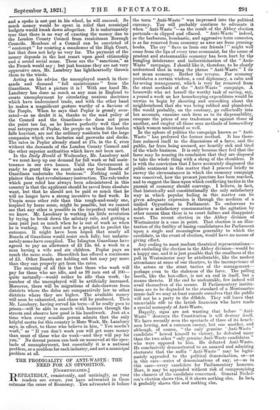 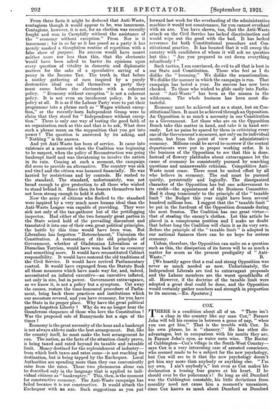 Page 7, 3 September 1921 — THE PRODIGALITY OF ANTI-WASTE : THE NEED FOR AN OPPOSITION.
Close

THE PRODIGALITY OF ANTI-WASTE : THE NEED FOR AN OPPOSITION.

[ComaimmaTED.1 DEPEATEDLY, consistently, and untiringly, as your readers are aware, you have advocated in these columns the cause of Economy. You advocated. it before the term " Anti-Waste " was impressed into the political currency. You will probably continue to advocate it when " Anti-Waste "—as the result of the Abbey election portends—is clipped and effaced. " Anti-Waste indeed, as the barbarous, bombastic, and aggressive term connote; is as far removed from economy as axes are from pruning, hooks. The cry " Save us from our friends ! " right well come from the lips of every true- economist, for the cause of prudent and statesmanlike economy has been. hurt by the bungling intolerance and indiscrimination of the " Anti- Waste campaign. I should like it, therefore, to be clearly understood that in using the phrase " Anti-Waste " I do not mean economy. Rather the reverse. For economy postulates a certain wisdom, a cool diplomacy, a calm and far-seeing management, which is very far removed. from the stunt methods of the " Anti-Waste " campaign. A housewife who set herself the worthy task of saving, say, a pound a week on her housekeeping expenditure would be unwise to begin by shouting and screeching about the neighbourhood that she was being robbed and plundered. She would probably, on the contrary, go collectedly into her accounts, examine each item as to its dispensability, compare the prices of one tradesman as against those of another, and employ all those sane methods of housewifery which women understand so well.

Economy is the great necessity of the hour and a bankrupt is not always ableeto make the best arrangement. But, like the country itself, he must make the best arrangement he can. The nation, as the facts of the situation clearly prove, is being taxed and rated beyond its taxable and rateable limit.. Money destined for the replenishment of industry— from which both taxes and rates come—is not reaching its destination, but is being tapped by the Exchequer. Local Authorities are spending more than they can conveniently raise from the rates. These two phenomena alone can be described only in the language that is applied to indi- vidual citizens as " bankruptcy." This, then, is the moment for constructive economy. The Anti-Waste campaign has failed because it is not constructive. It would attack the Exchequer with an axe. Such suggestions as you put forward last week for the overhauling of the administrative machine it would not countenance, for you cannot overhaul with an axe. You have shown, too, that the Anti-Waste attack on the Civil Service has lacked discrimination and would wipe out the good with the bad. It has lacked reverence for both Constitutional procedure and Con- stitutional practice. It has boasted that it will sweep the country with candidates of whom it will ask no question but this : " Are you prepared to cut down everything relentlessly ? "

Such tactics, I am convinced, do evil to all that is best in our State and Constitution. Those who feel as I do dislike the " booming." We dislike the sensationalism. We dislike the manner in which the campaign is run. That campaign has lasted a year. Its success has now been checked. To those who wished to glide easily into Parlia- ment " Anti-Waste " has been as the manna in the wilderness. The whole business has been most dis- tasteful.

Economy must be achieved not as a stunt, but on Con- stitutional lines. It must be achieved through an Opposition. An Opposition is as much a necessity in our Constitution as a Government. Let those who are on the Opposition Bench take this matter in hand, and take it in hand seri- ously. Let no pains be spared by them in criticizing every one of the Government's measures, not only on its individual merits, but from the point of view of administrative economy. Millions could be saved to-morrow if the central departments were put in proper working order. It is the business of the Opposition to see that this is done. Instead of flowery platitudes about extravagance let the cause of economy be consistently pursued by searching questions and unanswerable criticism. Competitive Anti- Waste must cease. There must be united effort by all who believe in economy. The end must be pursued quietly, persistently and logically. The disorganized character of the Opposition has but one achievement to its credit—the appointment of the Business Committee. Had it clung tenaciously to the principle of the " taxable limit " the Budget this year might have been several hundred millions less. I suggest that the " taxable limit " be put in the forefront of the Opposition demands during the next Session. The Coalition has one great virtue— that of stealing the enemy's clothes. Let this article be placed in a conspicuous position and I make no doubt that before long the Coalition will claim it as its very own. Before the principle of the " taxable limit " is adopted in our national finances there can be no hope for serious economy.

Unless, therefore, the Opposition can unite on a question such as this, the dissipation of its forces will be as much a matter for scorn as the present prodigality of " Anti- [We heartily agree that a real and strong Opposition was never so much needed as now. Unfortunately, the Independent Liberals are tied to extravagant proposals and the Labour members are the worst spendthrifts of all. However, if the doctrine of the taxable lirm't were adopted a great deal could be done, and the Opposition would certainly gather numbers and strength in proportion to its success.—En. Spectator.]