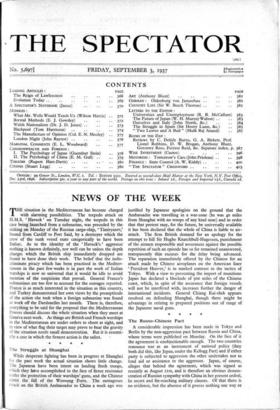 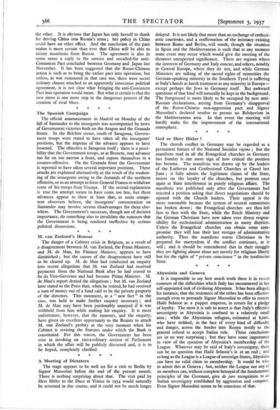 Page 1, 3 September 1937 — The Russo-Chinese Pact A considerable impression has been made in
Close

The Russo-Chinese Pact A considerable impression has been made in

Tokyo and Berlin by the non-aggression pact between Russia and China, whose terms were published on Monday. On the face of it the agreement is unobjectionable enough. The two countries renounce war as an instrument of national policy (they both did this, like Japan, under the Kellogg Pact) and if either party is subjected to aggression the other undertakes not to lend aid or assistance to the aggressor. Japan, of course, alleges that behind the agreement, which was signed as recently as August 21st, and is therefore an obvious demon- stration of Russian sympathy with China in her present ordeal, lie secret and far-reaching military clauses. Of that there is no evidence, but the absence of it proves nothing one way or the other. It is obvious that Japan has only herself to thank for driving China into Russia's arms ; her policy in China could have no other effect. And the conclusion of the pact makes it more certain than ever that China will be able to secure munitions from Russia. The agreement is also in some sense a reply to the unwise and uncalled-for anti- Comintern Pact concluded between Germany and Japan last November. It has been suggested that the Russo-Chinese action is such as to bring the earlier pact into operation, but unless, as was rumoured in that case too, there were secret military clauses attached to an apparently innocuous political agreement, it is not clear what bringing the anti-Comintern Pact into operation would mean. But what is certain is that the new move is one more step in the dangerous process of the creation of rival blocs.