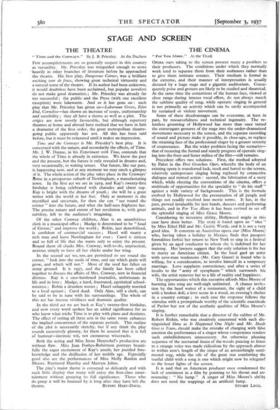 • ' For You Alone." At the Tivoli OPERA. stars taking to the screen present many a problem to their inoducers. The conditions under which they normally

work tend to separate them from their audiences rather than to give them intimate contact. Their medium is formal in the extreme, and their manner of interpretation is usually dictated by a huge stage and a gigantic auditorium. Conse- quently poise and gesture are likely to be studied and theatrical. At the same time the contortions of the human face, viewed at close range during intense vocal effort, do not always match the sublime quality of song, while operatic singing in general is not primarily an activity which can be easily accompanied by sustained or violent movement.

Some of these disadvantages can be overcome, at least in part, by resourcefulness and technical ingenuity. The re- lentless grooming of Hollywood has more than once tamed the extravagant gestures of the stage into the under-dramatised movements necessary to the screen, and the separate recording of sound and picture make it possible, in close-ups, to replaie the straining face of the professional singer by a greater serenity of countenance. But the wider problem facing the scenarist— that of recasting the formal and stately progress of operatic sing- ing into the freer and faster milieu of the film—still remains.

Precedent offers two solutions. First, the method adopted by Pabst in the Drei Groschen Oper, whereby the body of an

existing opera is transferred lock, stock-and barrel to the screen, relatively unimportant singing being replaced by connective dialogue and mimed action : second, the fabrication of a story which, while obeying the conventions of the cinema, offers a Multitude of opportunities for the specialist to " do his stuff " against a wide variety of backgrounds. This is the formula

evolved by Hollywood for the presentation of all People and things not readily resolved into movie terms. It has, in the past, proved invaluable for jazz bands, dancers and performing animals, and in For You Alone it has been revived to set off the splendid singing of Miss Grace Moore.

Considering its inventive ability, Hollywood might in this case have done better. The story is based upon an " idea " by Miss Ethel Hill and Mr. Cedric Worth, and it is not a very good idea. " ft concerns an Australian opera. star (Miss Moore) who, having taken a holiday in Mexico, finds that passport formalities forbid her return to New York to sing in a festival

given by an aged conductor to whom she is indebted for her training. Her lawyers suggest that- the only solution is for her

to marry an American citizen. In the local gaol an artist with cave-man tendencies (Mr. Cary Grant) is found who is willing, for a consideration, to involve himself in a temporary marriage. Love supplants convenience, and after a series of insults to the " army of sycophants "- which surrounds his wife, the artist removes her to a life of reality and happiness: The opportunities which this narrative affords Miss Moore of bursting into song are well-nigh unlimited. A chance invita- tion by the head waiter of a restaurant, the sight of a child with a broken doll, a love scene in a wood, an evening's shelter in a country cottage ; in each case the response follows the stimulus with a promptitude worthy of the scientific exactitude of Pavlov but not of the aesthetic qualities of Miss Moore's singing.

It is further remarkable that a director of the calibre of Mr. Robert Riskin, who was creatively concerned with such dis-

tinguished films as It Happened One Night and Mr. Deeds Goes to Town, should make the mistake of charging with false emotion the performance of a singer whose competence renders

such embellishments unnecessary. An otherwise pleasing sequence of the nocturnal fauna of the woods pausing to listen to a strange voice was made ridiculous by the approach almost

to within arm's length of the singer of an astonishingly senti- mental stag, while the role of the great star comforting the tearful child with a song is one which might now be relegated to the lesser lights of the screen.

It is said that an American producer once condemned the lack of sentiment in a film by pointing to his throat and an- nouncing " No lump." A singer of Miss Moore's ability does not need the trappings of an artificial lump.