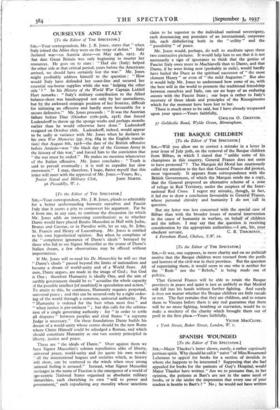 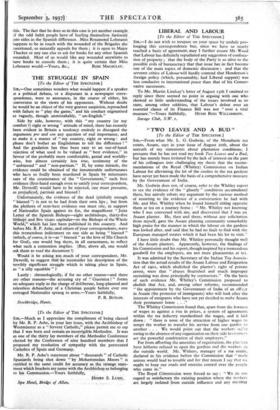 [To 'the Editor of THE SPECTATOR.] SIR,—Major Thacker's letter shows, surely, a rather captiously partisan spirit. Why should he call it " naive " of Miss Rosamond Lehmann to appeal for books for a section of invalids in whom she happens to be interested ? Supposing that she had appealed for books for the patients of Guy's Hospital, would Major Thacker have written " Are we to presume that, in her opinion, the patients at Bart's are not in the same need of books, or is she under the impression that every one of your readers is hostile to Bart's ? " No ; he would not have written this. The fact that he does so in. this case is yet another example pf the odd habit people have of hurling_ thernselyes furiously into sides in the Spanish difference. Miss Rosamond Lehmann_ happens to be in touch with the wounded of the Brigades she mentioned, -so naturally appeals for them ; it is open to Major Thacker or any one else to ask for books for any other Spanish wounded. Most of us would like any wounded anywhOre_ to have books to console them ; it is quite certain that Miss