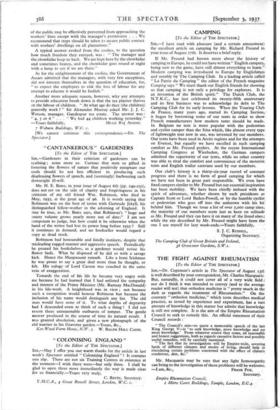 THE FIGHT AGAINST RHEUMATISM

[To the Editor of THE SPECTATOR.] Sut,—Dr. Copeman's article in The Spectator of August jsth is well described by your correspondent, Mr. Charles Macquarie. But, naturally, it could not cover all of a very wide field ;

nor do I think it was intended to convey (and to the average reader will not) that orthodox medicine is " pretty much in the dark as regards the treatment of Rheumatism." On the contrary " orthodox medicine," which term describes medical practice, as tested by experience and experinient, has a vast amount of knowledge in this matter but admits that knowledge is still not complete. It is the aim of the Empire Rheumatism Council to seek to remedy this: An official statement of their Council records :

" The Council's aim—to quote a memorable speech of the late King George V—is to seek knowledge, more knowledge and yet more knowledge.' From whatever source they come, all reasonable and honest suggestions, both as regards causative factors and possibly useful remedies, will be carefully examined.

" The fact that its investigations will be Empire-wide, covering lands of different climates and modes of living, should help in elucidating certain problems concerned with the effect of climatic conditions, diet, &c."

Mr. Macquarie may be sure that any light homoeopathy can bring to the investigation of these problems will be welcome.