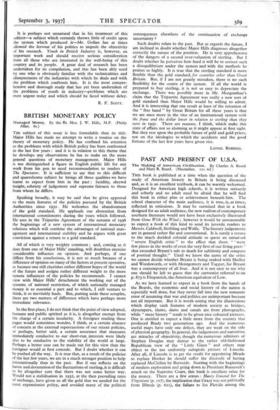 THE subject of this essay is less formidable than its title. Major Hills has made no attempt to write a treatise on the theory of monetary policy. He has confined his attention to the problems with which British policy has been confronted in the last few years : and it is in relation to this theme that he develops any observations he has to make on the more general questions of monetary management. Major Hills is too distinguished a figure in English public life for any work from his pen to need recommendation to readers of The Spectator. It is sufficient to say that to this difficult and quarrelsome subject he brings all those qualities we have learnt to expect from him in the past : lucidity, shrewd insight, sobriety of judgement and supreme fairness to those from whom he differs.

Speaking broadly, it may be said that he gives approval to the main features of the policies pursued by the British Authorities since 1931. He welcomes the abandonment of the gold standard. He applauds our abstention from international commitments diffing the years which followed. He sees in the Tripartite Agreement of the autumn of 1936 the beginnings of a new system of international monetary relations which will combine the advantages of national man- agement and international stability and he argues with great conviction against a return to a gold standard.

All of which is very weighty comment ; and, coming as it does from one of Major Hills' standing, will doubtless exercise considerable influence on opinion. And perhaps, if one differs from his conclusions, it is not so much because of a difference of opinion on many of the factors at present operative, as because one still cherishes rather different hopes of the world of the future and assigns rather different weight to the more remote influences of the policies he recommends. I cannot view with Major Hills' detachment the working out of the systems of national restriction, of which nationally managed money is so essential a part and to which, I still venture to think, it so inevitably leads. But, putting aside these scruples, there are two matters of difference which have perhaps more immediate relevance.

In the first place, I do not think that the point of view adopted, humane and public spirited as it is, is altogether exempt from the charge of a certain insularity. A foreigner reading these pages would sometimes wonder, I think, at a certain absence of concern at the external repercussions of our recent policies, or perhaps, better said, a certain assurance that measures immediately conducive to our short-run .interests were likely also to be conducive to the stability of the world at large. Perhaps. a better case can be made out for this view than the foreigner would at first concede. But I doubt whether it can be pushed all the way. It is true that, as a result of the policies of the last few years, we are in a much stronger position to help internationally than in the past. But if one reflects on the havoc and devastation of the fluctuations of sterling, it is difficult to be altogether sure that there was not some better way. Would not a stabilisation in 193z, at the then prevailing rates of exchange, have given us all the gold that we needed for the most, expansionist policy, and avoided many of the political

consequences elsewhere of the continuation of exchange uncertainty ?

Such doubts relate to the past. But as regards the future, I am inclined to doubt whether Major Hills diagnoses altogether correctly the nature of the position. He is very apprehensive of the dangers of a second over-valuation of sterling. But I doubt whether he perceives how hard it will be to correct such a disequilibritun. under the system -and with the methods he praises so highly. It is true that the sterling standard is more flexible than the gold standard, for countries other than Great Britain. But, if I am not greatly mistaken, there is no such flexibility for the centre of the system. If all the world is prepared to buy sterling, it is not so easy to depreciate the exchange. There was possibly more in Mr. Morgenthau's claim that the Tripartite Agreement was really a new sort of gold standard than Major Hills would be willing to admit. And it is interesting that one result at least of the retention of the " free hand " by Great Britain for all these years is that we are once more in the vice of an international system with the franc and the dollar lower in relation to sterling than they were in 1931. There are reasons, I think, which make this state of affairs not so alarming as it might appear at first sight. But they rest upon the probable future of gold and gold prices, not on the ideologies to which the accidents and the good fortune of the last few years have given rise.