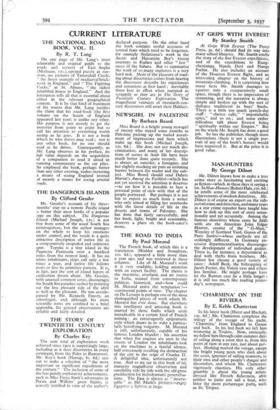 AT GRIPS WITH EVEREST By Stanley Snaith

At Grips With Everest (The Percy Press, .3s. 6d.) should find its way into many school libraries. Mr. Snaith retells the story of the five Everest expeditions, and of the expeditions to Kang- chenjunga, Nanda Devi and Nanga Parbat. He also includes an account of the Houston gverest flight, and an interesting chapter on the history of mountain-climbing. It is surprising how many facts Mr. Snaith manages to squeeze into-- a comparatively small space, though there is no impression of cramming, and the 'narrative is always simple and broken up with the sort of dialogue traditional in boys' bOoks. There is .a little too much speech-day stuff : " clarion calls," "imperishable epics," and so on ; and some rather ridiculous talk about Everest being " spiritually within our Empire." But on the whole Mr. Snaith has done a good job. So has the publisher,-though more illustrations (there is not a single por- trait of any of the book's heroes) would have improved it. But at the price it is good value.