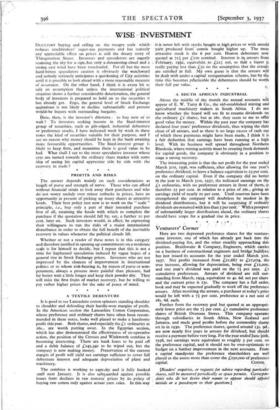 Venturers' Corner Here are two depressed preference shares for the

venture- some investor, one of which has already got -back into the dividend-paying list, and the other steadily approaching this position. Braithwaite & Company, Engineers, which carries on a business of constructional engineers and, bridge' bmIders, has just issued its accounts for the year ended March 31st, 1937. Net profits increased from £21,687 to £27,074, the true increase, allowing for depreciation, being over and one year's dividend was paid on the 71 per cent. ..£1 cumulative preferences. Arrears of dividend are Still out- standing from March, 1934, equivalent to 4s. 6d. net per share and the current price is 23s. The company has a full order, book and may be expected gradually to work off the preference arrears. After receiving the arrears, a purchaser at today's price would be left with a 74 per cent. preference at a net cost of 18s. 6d. each.

Further from the recovery goal but quoted at an appropri- ately lower price are the 74 per cent. Li cumulative preference shares of British Overseas Stores. This company operates through subsidiaries in South Africa, New Zealand and Jamaica, and made good profits before the commodity slump set in in 193o. The preference shares, quoted around 13s. 9d., are now nearly five years in arrears for dividend, but should receive a payment befcire very long. For the year elided:June joth, 1936, net earnings were equivalent to roughly 3 per cent. on the preference capital, and it should not-be over-optimistic to litidget on a -further improvement in the next accounts. From a - capital standpoint the preference shaieholciers are well placed as the assets more than cover the £25o,000 of preference [Readers' enquiries, or requests for advice regarding: particular shares, will be answered periodically as space permits. Correspcin- diiitfi who do- itot desire their' names: to appear should append initials or a pseudonym to their questions.}