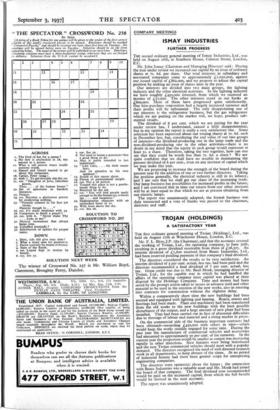 Mr. John Ismay (Chairman and Managing Director) said : During the year under review we increased our capital by an issue of ordinary shares at 7s. 6d. per share. Our total interests in subsidiary and associated companies come to approximately £r,o5o,000, against our issued capital of £862,000, and we propose to adjust the capital position by making an issue of shares later in the year. Our interests are divided into two main groups, the lighting industry and the other electrical activities. In the lighting industry we have roughly £450,000 invested, from which we received an income of £57,000. The other interests stand in our books at £600,00o. Most of them have progressed quite satisfactorily. Our hire-purchase corporation had a largely increased turnover and their profits will be substantial. The only disappointing one of our interests is the refrigerator business, but the gas refrigerator which we are putting on the market will, we hope, produce sub- stantial results.

The dividend of 6 per cent. which we are paying for the year under review has, I understand, caused a little disappointment, but in my opinion the report is really a very satisfactory one. Some criticism has been expressed about our issuing shares at 7s. 6d. each in December last, but, considering the real value of our two groups of interests-the dividend-producing one in the lamp trade and the non-dividend-producing one in the other activities-there is no doubt in my mind that the equity in each group would represent at least 5s. a share. Therefore, taking the two together, how can one say that they could be worth less than 7s. 6d. a share ? We are quite confident that we shall have no trouble in maintaining the present dividend of 6 per cent., even on any increase of capital which we may make this year.

We are proposing to increase the strength of the board during the present year by the addition of one or two further directors. Taking the position generally, the electrical industry is still in its infancy, and I am sure that we shall get our share of the increasing trade. Our lamp business has possibilities for increased profits in the future, and I am convinced that in time our return from our other interests will be at least equal to that which we are at present obtaining from our electric lamps.

The report was unanimously adopted, the formal business was duly transacted and a vote of thanks was passed to the chairman, directors and staff.