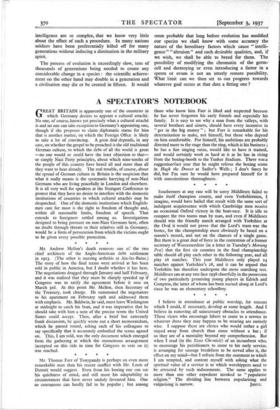 Mr. Andrew Mellon's death removes one of the two chief

architects of the Anglo-American debt settlement in 1923. (The other is nursing arthritis at Aix-les-Bains.) The story of how the final terms were arrived at has been told in public in America, but I doubt whether it has here. The negotiations dragged through January and half February, and it was realised that they must be sharply speeded up if Congress was to ratify the agreement before it rose on March 3rd. At this point Mr. Mellon, then Secretary of the Treasury, took charge. He summoned the negotiators to his apartment on February 19th and addressed them with emphasis. Mr. Baldwin, he said, must leave Washington at midnight to catch his boat, and it was imperative that he should take with him a note of the precise terms the United States could accept. Then, after a brief but extremely frank discussion, he quickly wrote out a short memorandum, which he passed round, asking each of his colleagues to say specifically that it accurately embodied the terms agreed on. This, I am told, was the only document which emerged from the gathering at which the momentous arrangement (accepted on this side in time for Congress to vote on it) was reached.