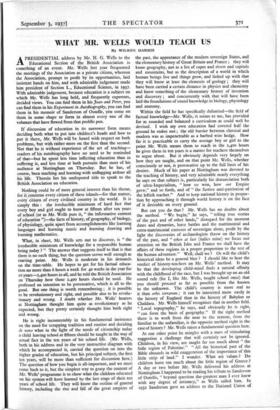 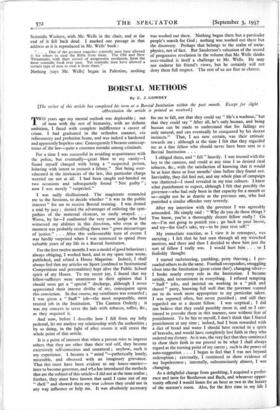 WHAT MR. WELLS WOULD TEACH US

APRESIDENTIAL address by Mr. H. G. Wells to the Educational Section of the British Association is something of an event. Mr. Wells last year frequented the meetings of the Association as a private citizen, whereon the Association, prompt to profit by its opportunities, laid insistent hands on him, and with admirable judgement made him president of Section L., Educational Science, in 1937• With admirable judgement, because education is a subject on which Mr. Wells has long held, and frequently expresses, decided views. You can find them in his Joan and Peter, you can find them in his Experiment in Autobiography, you can find them in his memoir of Sanderson of Oundle, you come on them in some shape or form in almost every one of the volumes that have flowed from that prolific pen.

If discussion of education in its narrower form means deciding both what to put into children's heads and how to put it there, Mr. Wells will be heard with respect on both problems, but with rather more on the first than the second. Not that he is without experience of the art of teaching— readers of his autobiography have no need to be reminded of that—but he spent less time inflicting education than in suffering it, and less time at both pursuits than most of his audience at Nottingham on Thursday. But he has, of course, been teaching and learning with unflagging ardour all his life. Therein lies his undisputed title to speak to the British Association on education.

Nothing could be of more general interest than his theme, for it concerns every citizen of these islands—for that matter, every citizen of every civilised country in the world. It is simply this : the irreducible minimum of hard fact that every boy and girl ought to know at fifteen after ten years of school (or as Mr. Wells puts it, " the informative content of education ")—the facts of history, of geography, of biology, of physiology, quite apart from accomplishments like learning languages and learning music and learning drawing and learning mathematics.

What, in short, Mr. Wells sets out to discover, is " the irreducible minimum of knowledge for a responsible human being today ? " The answer that suggests itself to that is that there is no such thing, but the question serves well enough as starting point. Mr. Wells is moderate in his demands on the time-table. He hopes to get for his factual educa- tion no more than 6 hours a week for 4o weeks in the year for to years-2,400 hours in all, and he told the British Association on Thursday how those 2,40o hours should be used. He professed an intention to be provocative, which is all to the good. But one thing is worth remembering ; it is possible to be revolutionary and right, and possible also to be revolu- tionary and wrong. I doubt whether Mr. Wells' hearers at Nottingham thought him quite as revolutionary as he expected, but they pretty certainly thought him both right and wrong.

He is right incontestably in his fundamental insistence on the need for scrapping tradition and routine and deciding de novo what in the light of the needs of citizenship today a child leaving school at fifteen should be taught in the way of actual fact in the ten years of his school life. (Mr. Wells, both in his address and in the very instructive diagram with which he accompanied it, carried the question on into the higher grades of education, but his principal subject, the first ten years, will be more than sufficient for discussion here.) The question of how you begin is all-important, and we must come back to it, but the simplest way to grasp the content of Mr. Wells' programme is to show what the children educated on his system will have learned by the last stage of their ten years of school life. They will know the outline of general history, including the rise and fall of the great empires of the past, the appearance of the modern sovereign States, and the elementary history of Great Britain and France ; they will know geography, not as a list of capes and rivers and capitals and mountains, but as the description of a world in which human beings live and things grow, and linked up with that they will know at least the elements of geology ; they will have been carried a certain distance in physics and chemistry and know something of the elementary history of invention and discovery ; and concurrently with that will have been laid the foundations of sound knowledge in biology, physiology and anatomy.

Within the field he has specifically delimited—the field of factual knowledge—Mr. Wells, it seems to me, has provided for as rounded and balanced a curriculum as could well be devised. I wish my own education had covered half the ground he stakes out ; the old barrier between classical and modem was as impenetrable as a barbed wire hedge. How far it is practicable to carry the average boy or girl to the point Mr. Wells means them to reach in the 2,400 hours he gives them in ten years is a matter for teachers themselves to argue about. But it obviously depends very largely on how they are taught, and on that point Mr. Wells, whether consciously or not, is provocative up to the full limit of his desires. Much of his paper at Nottingham was devoted to the teaching of history, and very admirable nearly everything he says on that subject is, particularly his denunciation both of ultra-Imperialism, " how we won, how our Empire grew," and so forth, and of " the furtive anti-patriotism of the leftish teacher." And to keep national history in propor- tion by approaching it through world history is on the face of it desirable on every ground.

But can you do that ? Mr. Wells has no doubts about the method. " We begin," he says, " telling true stories of the past and of other lands," disregard for the moment dates and dynasties, leave battles and the matrimonial and extra-matrimonial excesses of sovereigns alone, profit by the light the discoveries of archaeologists throw on the history of the past, and " when at last (italics mine) we focus our attention on the British Isles and France we shall have the affairs of these regions in a proper proportion to the rest of the human adventure." Well, shall we ? Or will the child's historical ideas be a general blur ? I should like to hear the verdict of history-teachers on Mr. Wells' method. It may be that the developing child-mind finds a natural affinity with the childhood of the race, but I was brought up on an old sound rule (for I, like Mr. Wells, taught school once) that you should proceed as far as possible from the known to the unknown. The child's country is more real to it than orbis terrarum ; it can be interested more easily in the history of England than in the history of Babylon or Chaldaea. Mr. Wells himself recognises that in another field. " Local topography," he says, and obviously he is right, " can form the basis of geography." If the right method there is to work from the near to the remote, from the familiar to the unfamiliar, is the opposite method right in the case of history? Mr. Wells raises a fundamental question here.

At one other point he mingles with a mass of stimulating suggestion a challenge that will certainly not be ignored. Children, in his view, are taught far too much about " the little region of Palestine." " All the historical past of the Bible abounds in wild exaggeration of the importance of this little strip of land." I wonder. What are values ? Do children learn too much about the little region of Greece ? A day or two before Mr. Wells delivered his address at Nottingham I happened to be reading his tribute to Sanderson of Oundle, " beyond question the- greatest man I ever knew with any degree of intimacy," as Wells called him. In 1932 Sanderson gave an address to the National Union of Scientific Workers, with Mr. Wells in the chair, and at the end of it fell back dead. I marked one passage in that address as it is reproduced in Mr. Wells' book : " . . . One of the greatest tragedies scientific men have allowed is for others to steal the Bible from them. The Old and New Testaments, with their record of progressive revelation, form the most scientific book ever seen. Yet scientific men have allowed a certain type of man to steal it from them."

Nothing (says Mr. Wells) began in Palestine, nothing was worked out there. Nothing began there but a particular people's search for God ; nothing was worked out there but the discovery. Perhaps that belongs to the realm of meta- physics, not of fact. But Sanderson's valuation of the record of progressive revelation in the volume that Mr. Wells thinks over-studied is itself a challenge to Mr. Wells. He may not endorse his friend's views, but he certainly will not deny them full respect. The rest of us are free to choose.