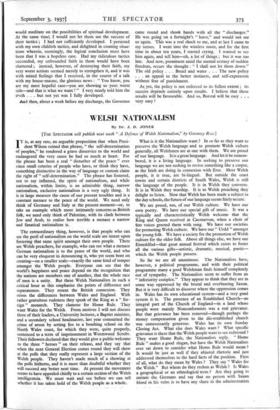 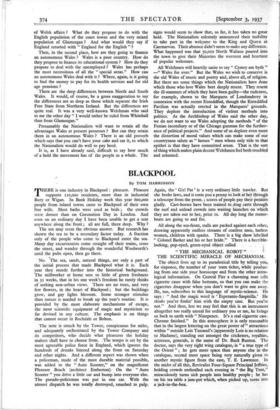 [THE SPECTATOR will publish next week " A Defence of Welsh Nationalism," by Goronwy Rees.] IT is, at any rate, an arguable proposition that when Presi- dent Wilson coined that phrase, " the self-determination of peoples," he rendered a grave disservice to the world and endangered the very cause he had so much at heart. For the phrase has been a real " disturber of the peace " ever since small coteries of people who have, or think they have, something distinctive in the way of language or custom claim the right of " self-determination." The phrase has fostered, not to say inflamed, the spirit of nationalism, and while nationalism, within limits, is an admirable thing, narrow nationalism, exclusive nationalism is a very ugly thing. It is in large measure the cause of our present troubles and is a constant menace to the peace of the world. We need only think of Germany and Italy at the present moment—or, to take an example which more intimately concerns us British folk, we need only think of Palestine, with its clash between Jew and Arab, to realise how terrible a menace a narrow and fanatical nationalism is.

The extraordinary thing, however, is that people who can see the peril of nationalism on the world scale are intent upon fostering that same spirit amongst their own people. There are Welsh preachers, for example, who can see what a menace German nationalism is to the peace of the world, and who can be very eloquent in denouncing it, who yet seem bent on creating—on a smaller scale—exactly the same kind of temper amongst the Welsh people. Everyone can see that the world's happiness and peace depend on the recognition that the nations are members one of another, that the whole race of men is a unity. But these Welsh Nationalists in such a critical hour as this emphasise the points of difference and separateness. They resent the British connexion. They stress the differences between Wales and England. With rather gratuitous rudeness they speak of the King as a " for- eign " monarch. They clamour for Home Rule. They want Wales for the Welsh. From motives I will not discuss three of their leaders, a University lecturer, a Baptist minister, and a secondary school headmaster, last year committed the crime of arson by setting fire to a bombing school on the North Wales coast, for which they were, quite properly, sentenced to a term of imprisonment in Wormwood Scrubs. Their followers declared that they would give a public welcome to the three " heroes " on their release, and they say that when the next General Election comes round they will show at the polls that they really represent a large section of the Welsh people. They haven't made much of a showing at the polls hitherto, and it is more than doubtful whether they will succeed any better next time. At present the movement seems to have appealed chiefly to a certain section of the Welsh intelligentsia. We must wait and see before we can tell whether it has taken hold of the Welsh people as a •whole.. What is it the Nationalists want ? In so far as they want to preserve the Welsh language and to promote Welsh culture generally, all Welshmen are at one with them. We are proud of our language. It is a great language. And let it be remem- bered, it is a living language. In seeking to preserve our language we are not seeking to revive something like a corpse, as the Irish are doing in connexion with Erse. Most Welsh people, it is true, are bi-lingual. But outside the coast towns and certain districts of South Wales, Welsh is still the language of the people. It is in Welsh they converse. It is in Welsh they worship. It is to Welsh preaching they delight to listen. Now that Welsh has been made a subject in the day schools, the future of our language seems fairly secure.

We are proud, too, of our Welsh culture. We have our own poetry. We have our special gift of music. It was a typically and characteristically Welsh welcome that the King and Queen received at Caernarvon, when a choir of Soo voices greeted them with song. We have our societies for promoting Welsh culture. We have our " Urdd " amongst the young folk. We have a society for the promotion of Welsh culture for the older folk. Above all things else, we have our Eisteddfod—that great annual festival which exists to foster all the various gifts—artistic, dramatic, musical, poetic— which the Welsh people possess.

So far we are all unanimous. The Nationalists have, however, a political programme, and with their political programme many a good Welshman finds himself completely out of sympathy. The Nationalists seem to suffer from an " inferiority complex." They appear to think that they are in some way oppressed by the brutal and overbearing Saxon. But it is very difficult to discover where the oppression comes in. Wales has its own educational system—and a very good system it is. The presence of an Established Church—an integral part of the Church of England—in a land whose people were mainly Nonconformists was a real grievance. But that grievance has been removed—though perhaps the money compensation given to the dis-established church was unnecessarily generous. Wales has its own Sunday Closing Act. What else does Wales want ? What specific grievance is there that the Welsh people want to see redressed ? They want Home Rule, the Nationalists reply. " Home Rule " makes a good slogan, but have the Welsh Nationalists ever sat down to consider what Home Rule would mean ? It would be just as well if they abjured rhetoric and just addressed themselves to the hard facts of the position. First of all, what do they mean by Wales ? They say " Wales for the Welsh." But whom do they reckon as Welsh ? Is Wales a geographical or an ethnological term ? Are they going to imitate the. Germans and say that no person with Saxon blood in his veins is to have any share in the administration of Welsh affairs ? What do they propose to do with the English population of the coast towns and the very mixed population of Glamorgan ? And what would they say if England retorted with " England for the English " ?

Then, in the second place, how are they going to finance an autonomous Wales ? Wales is a poor country. How do they propose to finance its educational system ? How do they propose to deal with the unemployed ? Wales has perhaps the most necessitous of all the " special areas." How can an autonomous Wales deal with it ? Where, again, is it going to find the money to pay for its health services and for old age pensions ?

There are the deep differences between North and South Wales. It would, of course, be a gross exaggeration to say the differences are as deep as those which separate the Irish Free State from Northern Ireland. But the differences are quite real. It was a very well-known Welshman who said to me the other day " I would rather be ruled from Whitehall than from Glamorgan."

Presumably the Nationalists will want to retain all the advantages Wales at present possesses ? But can they retain them in an autonomous Wales ? There is an old proverb which says that you can't have your cake and eat it, to which the Nationalists would do well to pay heed.

It is, as I have already said, difficult to say how much of a hold the movement has of the people as a whole. The signs would seem to show that, so far, it has taken no great hold. The Nationalists solemnly announced their inability to take part in the welcome to the King and Queen at Caernarvon. Their absence didn't seem to make any difference. What happened was that 50,000 North Walians poured into the town to give their Majesties the warmest and heartiest of popular welcomes.

All Welshmen will heartily unite to say " Cymry am byth " —" Wales for ever." But the Wales we wish to conserve is the old Wales of music and poetry arid, above all, of religion. But there are some things which the Nationalists have done which those who love Wales best deeply resent. They resent the ill-manners of which they have been guilty—the rudeness, for example, shown to the Marquess of Londonderry in connexion with the recent Eisteddfod, though the Eisteddfod Pavilion was actually erected in the Marquess' grounds. They deplore the introduction of violent methods into politics. As the Archbishop of Wales said the other day, we do not want to see Wales adopting the methods " of the Fenian incendiary or of the Chicago gunman for the further- ance of political projects." And some of us deplore even more the distortion of moral values which can make some of our countrymen salute as " heroes " men whose only title to that epithet is that they have committed arson. That is the sort of thing which makes plain decent Welshmen feel both troubled and ashamed.