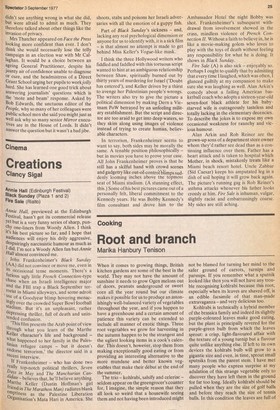 Annie Hall (Edinburgh Festival) Black Sunday (Plaza 1 and 2) Fire Sale (Rialto) 4nnie Hall, previewed at the Edinburgh Festival, hasn't got its commercial release Yet but is a very funny series of sharp, pun chy from Woody Allen. I think It's his best picture so far, and I hope that audiences will enjoy his drily aggressive, despairingly narcissistic humour as much as I did. I'm not a Woody Allen fan but Annie Hall almost convinced me.

John Frankenheimer's Black Sunday (AA) did not convince or move me, even in its occasional tense moments. There's a furious ugly little French Connection-type chase when an Israeli intelligence major and the FBI trap a Black September ter, rorist in Miami alleyways, and some adroit ?se of a Goodyear blimp hovering menac'ugly over the crowded Super Bowl football stadium, But it's an unpleasant, rather depressing thriller, full of death and unintended confusion. This film presents the Arab point of view throu...6.h what you learn of the Marthe Keller character's life and background — What happened to her family in the Palestinian refugee camps — but it doesn't endorse terrorism,' the director said in a recent interview. If Frankenheimer — who has done two really top-notch political thrillers, Seven D.aYr in May and The Manchurian Candidate —believes that, he'll believe anything. IVIarthe Keller (Dustin Hoffman's girl friend in The Marathon Man) radiates blank emptiness as the Palestine Liberation Organisation's Mata Hari in America. She