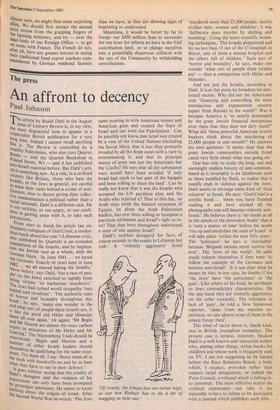 The article by Roald Dahl in the August Issue of Literary Review is, in my view, the Most disgraceful item to appear in a irespectable British publication for a very ,I9ng time. Indeed 1 cannot recall anything 'Ike it, The Review is controlled by a Ntealthy Palestinian, who also runs Quartet ircks and the Quartet Bookshop in ' °land Street, WI — and it has published anti-Israeli material before. But Dahl's arti- cle is something new. As a rule, in a civilised country like Britain, those who hate the Israelis, or the Jews in general, are careful to Mask their views behind a screen of anti- ZInaisnri, thus in theory giving their collec- tive condemnation a political rather than a racial rationale. Dahl is a different case. He is too reckless, or too angry, or too confi- dent in getting away with it, to take such Precautions. From start to finish his article (an en- thusiastic eulogitun of God Cried, a tenden- 110Lts book about last year's Lebanese crisis, also Published by Quartet) is an extended comparison of the Israelis, and by implica- tiimplica- tionthe Jewish race as a whole, with the German Nazis. 'In June 1941... we hated the Germans. Exactly 41 years later in June 1982.. . we all started hating the Israelis. Never before, says Dahl, 'has a race of peo- ItIlle (ie the Jews) switched so rapidly from victims 'to barbarous murderers', The Jews had turned world sympathy 'into hatred and revulsion'. 'The authentic tales ot horror and bestiality throughout this book', he says' 'make one wonder in the end what sort of people these Israelis are. It like the good old Hitler and Himmler times all over again.' Or again: `Mr Begin and Mr Sharon are almost the exact carbon copies in miniature of Mr Hitler and Mr Goering.' The Nurermberg Trials should be resurrected. 'Begin and Sharon and a number of other Israeli leaders should themselves be qualifying for the same treat- meat, Try them all, I say. Shove them all in the clock with handcuffs on and let us hear what they have to say in their defence.' It goes without saying that the crudity of Dahl's thoughts and the violence of his ,expressions can only have been prompted °Y grotesque ignorance. He seems to know nothing about the origins of Israel. After the Second World War he writes: 'The .lews

came pouring in with American money and American guns and created the State of Israel and out went the Palestinians.' Can he possibly not know that Israel was created Ely a vote of the United Nations (including the Soviet bloc); that it was then promptly invaded by all the Arab states with a view to exterminating it; and that its principal source of arms was not the Americans but the Czechs? He says that all the subsequent wars would have been avoided 'if only Israel had stuck to her part of the bargain and been willing to share the land'. Can he really not know that it was the Israelis who accepted the UN partition plan and the Arabs who rejected it? That to this day, no Arab state (with the belated exception of Egypt), let alone the Arab Palestinian leaders, has ever been willing to recognise a partition settlement and Israel's right to ex- ist? That they have throughout maintained a state of war against Israel?

Dahl's reckless disregard for facts of course extends to the events in Lebanon last year. A 'violently aggressive' Israel

'Of course, the school fees are rather high, so our son Rodney has to do a bit of 'nagging to help out."

'murdered more than 25,000 people, mostly civilian men, women and children'; it was 'deliberate mass murder by shelling and bombing'. Using the latest scientific bomb- ing techniques, 'The Israelis pinpointed and hit no less than 13 out of the 17 hospitals in Beirut, one of them a mental hospital and the others full of children.' Such acts of 'horror and bestiality', he says, make one wonder 'what sort of people these Israelis are' — then a comparison with Hitler and Himmler.

And not just the Israelis, according to Dahl. It is at this point he broadens his anti- Israeli racism. Why did not the Americans stop 'financing and controlling the most mendacious and expansionist country (apart from Russia) in the world?' Was it because America is 'so utterly dominated by the great Jewish financial institutions over there that they dare not defy them?' What did 'those powerful American Jewish bankers think about the murdering of 25,000 people in one month?' He answers his own question: 'it seems clear that the great Jewish communities outside Israel cared very little about what was going on.'

One has only to study the long sad and seemingly endless history of anti-semitism, based as it invariably is on falsehoods' such as those peddled by Dahl, to realise that it usually ends in violence against the Jews. Dahl seems to envisage some kind of 'final solution' to Israel. He says: 'God Cried is a terrific book... when you have finished reading it and have studied all the photographs you will become violently anti- Israel.' He believes there is `no doubt at all in the minds of the shrewdest Arabs' that it is 'only a matter of time' before the Arabs `rise up and annihilate the state of Israel'. It will take place 'within the next fifty years'. The 'holocaust' he says is 'inevitable' because 'Brigand nations never survive for ever'. The 'Jews of the world', he adds could redeem themselves if they were 'to follow the example of the Germans and become anti-Israeli'. It is not clear what he means by this; in any case, he doubts if the `the Jews' have 'the conscience' or 'the guts'. Like others of his kind, he attributes to Jews contradictory characteristics. On the one hand they are violently aggressive; on the other cowardly. The reference to lack of 'guts', he told a New Statesman reporter, 'came from my wartime ex- perience, we saw almost none of them in the armed forces then'.

This kind of racial abuse is, thank God, rare in British journalism nowadays. The present case is serious, however, because Dahl is a well-known and successful author who, among other things, writes books for childlren and whose work is frequently used on TV. I ant not suggesting he be hauled before the Race Relations Board, a body which, I suspect, provokes rather than reduces racial antagonism, or indeed the Press Council, a tribunal which is falling in- to contempt. The most effective action the civilised community can take is for reputable writers to refuse to be associated with a journal which publishes such filth.