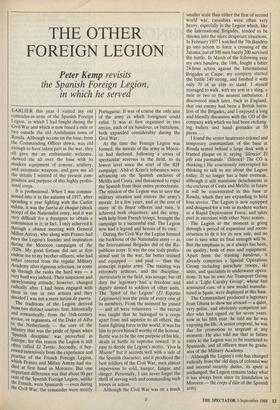 THE OTHER FOREIGN LEGION

the Spanish Foreign Legion, in which he served

EARLIER this year I visited my old comrades-in-arms of the Spanish Foreign Legion, in which I had fought during the Civil War and which is now based a mile or two outside the old Andalusian town of Ronda. Although no one on the base, from the Commanding Officer down, was old enough to have taken part in the war, they all gave me an enthusiastic welcome, showed me all over the base with its modern equipment of armour, artillery, and automatic weapons, and gave me all the details I wanted of the present com- position and purpose of this highly profes- ional corps.

It is professional. When I was commis- sioned into it in the autumn of 1937, after spending a year fighting with the Carlist militia, it was the fuerza de choque (shock troop) of the Nationalist army, and it was very difficult for a foreigner to obtain a commission in it; in fact, I only achieved it through a chance meeting with General Milian Astray, who along with Franco had been the Legion's founder and inspiration during the Morocco campaigns of the 1920s. My good fortune did not at first endear me to my brother-officers, who had either entered from the regular Military Academy after rigorous selection, or come up through the ranks the hard way — a very hard way indeed. Their suspicious and unwelcoming attitude, however, changed radically after I had been engaged with them in one or two actions and they decided I was not a mere turista de guerra. The traditions of the Legion derived from two distinct sources: first, historically and romantically, from the 16th-century tercios, or regiments, of the Duke of Alba M the Netherlands — the core of the infantry that was the pride of Spain when Spanish discipline' was proverbial in Europe; for this reason the Legion is still often called El Tercio. Secondly, it bor- rowed extensively from the experience and practice of the French Foreign Legion, which Franco and Milian Astray had stu- died at first hand in Morocco. But one important difference was that about 90 per Cent of the Spanish Foreign Legion, unlike the French, were Spaniards — even during the Civil War; the remainder were mostly Portuguese. It was of course the only unit of the army in which foreigners could enlist. It was at first organised in two tercios, each of six banderas, or battalions; both expanded considerably during the Civil War.

At the time the Foreign Legion was formed, the morale of the army in Moroc- co had declined, following a series of spectacular reverses in the field, to its lowest level since the start of the RIF campaign. Abd el Krim's tribesmen were advancing on the Spanish enclaves of Melilla and Ceuta, and threatened to expel the Spanish from their entire protectorate. The mission of the Legion was to save the military situation and restore the army's morale. In a few years, and at the cost of many of its finest officers and men, it achieved both objectives; and the army, with help from French troops, brought the campaign to a successful end. The Legion now had a legend and heroes of its own.

During the Civil War the Legion formed the backbone of the Nationalist army — as the International Brigades did of the Re- publican army. It was the one truly profes- sional unit in the war, far better trained and equipped — and paid — than the conscript regular army. The training was extremely arduous, and the discipline, particularly in the field, was savage; but off duty the legionary had a freedom and dignity denied to soldiers of other units. The 'Spirit of the Legion' (El Espirito Legionario) was the pride of every one of its members. From the moment he joined — and all were volunteers — the recruit was taught that he belonged to a corps apart from and superior to all others, the finest fighting force in the world; it was for him to prove himself worthy of the honour. Battle was to be the one purpose of his life, death in battle its supreme reward. It is easy to deride the Legion's motto, 'Viva la Muerter but it accords well with a side of the Spanish character; and it produced the best soldiers of the Civil War, men almost impervious to cold, hunger, fatigue and danger. Personally, I can never forget the thrill of serving with and commanding such troops in action.

Although the Civil War was on a much

smaller scale than either the first of second world war, casualties were often very heavy, especially in the Legion which, like the International Brigades, tended to be thrown into the more desperate situations. In February 1937 I watched the 7th Bandera go into action to force a crossing of the Jarama; out of 500 men barely 200 survived the battle. In March of the following year my own bandera, the 14th, fought a bitter 24-hour action against the International Brigades at Caspe; my company started the battle 140 strong, and finished it with only 70 of us able to stand. I myself managed to walk, with my arm in a sling, a mile or two to the nearest ambulance. I discovered much later, back in England, that our enemy had been a British batta- lion of the Brigades, and I enjoyed a long and friendly discussion with the CO of the company with which we had been exchang- ing bullets and hand grenades at 50 paces....

I found the senior lieutenant-colonel and temporary commandant of the base at Ronda seated behind a large desk with a framed plaque on it, saying `Silencio! El jefe esta piensando.' (Silence! The CO is thinking.) He courteously interrupted his thinking to talk to me about the Legion today. It no longer has a base overseas, although it still maintains detachments in the enclaves of Ceuta and Melilla; in future it will be concentrated in this base at Ronda, which they are expanding to hold four tercios. The Legion is now equipped and designed for a role in modern warfare as a Rapid Deployment Force, and takes part in exercises with other Nato armies.

The Legion at the moment is going through a period of expansion and recon- struction to fit it for its new role, and no one is sure what its final strength will be. But the emphasis is, as it always has been, on quality, both of men and equipment. Apart from the training banderas, it already comprises a Special Operations Group including parachute troops, ski units, and specialists in underwater opera- tions. It has its own Air Transport Group and a 'Light Cavalry Group', whose fast armoured cars, of a new model manufac- tured in Spain, were displayed at this base.

The Commandant produced a legionary from Ghana to show me around — a quiet, very polite, and obviously competent sol- dier who had signed on for seven years; now in his fifth year, he told me he was enjoying the life. A senior corporal, he was due for promotion to sergeant at any moment. He also told me that in future entry to the Legion was to be restricted to Spaniards, and all officers must be gradu- ates of the Military Academy.

Although the Legion's role has changed radically from the old days of colonial war and internal security duties, its spirit is unchanged; the Legion remains today what it has always been since its foundation in Morocco — the corps d'elite of the Spanish army.