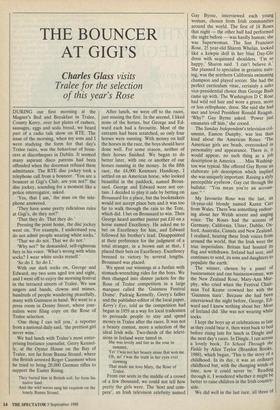 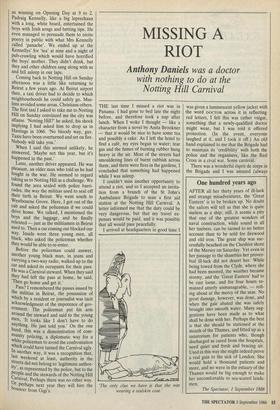 THE BOUNCER AT GIGI'S

Tralee for the selection of this year's Rose

DURING our first morning at the Magner's Bed and Breakfast in Tralee, County Kerry, over hot plates of rashers, sausages, eggs and soda bread, we heard part of a radio talk show on RTE. The issue of the morning, when my sons and I were studying the form for that day's Tralee races, was the behaviour of boun- cers at discotheques in Dublin. It seemed many aspirant disco patrons had been offended when the doorman refused them admittance. The RTE disc jockey took a telephone call from a bouncer. 'You are a bouncer at Gigi's Club, are you not?' the disc jockey, sounding for a moment like a police interrogator, asked.

'Yes, that I am,' the man on the tele- phone answered.

'They have some pretty ridiculous rules at Gigi's, do they not?'

Pressing the point home, the disc jockey went on, 'For example, I understand you do not admit people wearing white socks.'

'Why not?' he demanded, self-righteous fury in his voice. 'What's wrong with white socks? I wear white socks myself.'

With our dark socks on, George and Edward, my two sons aged ten and eight, and I went off to enjoy the morning festival in the terraced streets of Tralee. We saw singers and bands, clowns and mimes, hundreds of people wandering peacefully, many with Guinness in hand. We went to a press room in Denny Street, where jour- nalists were filing copy on the Rose of Tralee selection.

'One thing I can tell you,' a reporter from a national daily said, 'the prettiest girl never wins.'

We had lunch with Tralee's most enter- prising freelance journalist, Gerry Kennel- ly, at the Oyster House on the Bay of Tralee, not far from Banna Strand, where the British arrested Roger Casement when he tried to bring 20,000 German rifles to support the Easter Rising.

They buried him in British soil, far from his native land.

And the wild waves sang his requiem on the lonely Banna Strand.

After lunch, we were off to the races, just missing the first. In the second, I liked none of the horses, but George and Ed- ward each had a favourite. Most of the entrants had been scratched, so only four horses were running. With money on half the horses in the race, the boys should have done well. For some reason, neither of their horses finished. We began to do better later, with one or another of our horses running in the money. In the fifth race, the £4,000 Kenmare Handicap, I settled on an American horse, who looked beautiful in the paddock, named Brous- sard. George and Edward were not cer- tain. I decided to play it safe by betting on Broussard for a place, but the bookmakers would not accept place bets and it was too far to walk through the rain to the Tote, which did. I bet on Broussard to win. Then George heard another punter put £10 on a horse named Excellency. He asked me to bet on Excellency for him, and Edward followed his brother's lead. Disappointed at their preference for the judgment of a total stranger, in a brown suit at that, I placed their bets on Excellency. Excellency breezed to victory by several lengths. Broussard was placed.

We spent our winnings at a funfair with stomach-wrenching rides for the boys. We then changed into dinner jackets for the Rose of Tralee competition in a large marquee called the 'Guinness Festival Dome'. Padraig Kennelly, Gerry's father and the publisher-editor of the local paper, Kerry's Eye, told us the competition had begun in 1959 as a way for local tradesmen to persuade people to stay and spend money in Tralee after the races. It was not a beauty contest, more a selection of the ideal Irish wife. Two-thirds of the televi- sions in Ireland were tuned in.

She was lovely and fair as the rose in summer, Yet' t'was not her beauty alone that won me. Oh, no' t'was the truth in her eyes ever dawning That made me love Mary, the Rose of Tralee.

From our seats in the middle of a crowd of a few thousand, we could not tell how pretty the girls were. The 'host and com- pere', an Irish television celebrity named Gay Byrne, interviewed each young woman, chosen from Irish communities around the world. The first of 18 Roses that night — the other half had performed the night before — was hardly human; she was Superwoman. The San Francisco Rose, 25 year-old Sharon Whelan, looked like a kewpie doll in her blue Day-Glo dress with sequinned shoulders. 'I'm so happy,' Sharon said. 'I can't believe it.' She planned to specialise in geriatric nurs- ing, was the northern California swimming champion and played soccer. She had the perfect curriculum vitae, certainly a safer vice-presidential choice than George Bush came up with. The Washington D C Rose had wild red hair and wore a green, more or less cellophane, dress. She said she had met and loved President Ronald Reagan. 'Why?' Gay Byrne asked. 'Power just emanates off him,' she cooed.

The Sunday Independent's television col- umnist, Eamon Dunphy, was less than kind about the American Roses: 'The American girls are brash, overcooked in personality and appearance. There is, it would appear, no such thing as a job description in America . . . Miss Washing- ton was typical. She offered Gay Byrne an elaborate job description which implied she was uniquely important. Raising a slyly perceptible eyebrow, Gay cut through the bullshit: "You mean you're an accoun- tant." '

My favourite Rose was the last, an 18-year-old blonde named Karen Carr from Wales. There"'was something endear- ing about her Welsh accent and singing voice. The Roses had the accents of Germany, California, Ulster, Dublin, Ox- ford, Australia, Canada and New Zealand. I realised, hearing these Irish voices from around the world, that the Irish were the true imperialists. Britain had hoisted its flag and withdrawn. Ireland had sent, and continues to send, its sons and daughters to populate the earth.

The winner, chosen by a panel of businessmen and one businesswoman, was the New Zealand Rose, Mary-Ann Mur- phy, who cried when the Festival Chair- man Ted Keane crowned her with the 'Guinness tiara'. Because she had been interviewed the night before, George, Ed- ward and I knew nothing about her. Most of Ireland did. She was not wearing white socks.

I kept the boys up at celebrations as late as they could bear it, then went back to bed before rising late for lunch in Dingle and the next day's races. In Dingle, I ran across a lovely book, To School Through the Fields by Alice Taylor (Brandon Books, 1988), which began, 'This is the story of a childhood. In its day, it was an ordinary childhood but, with the changing winds of time, now it could never be.' Reading through it, I wondered whether it might be better to raise children in the Irish country- side.

We did well in the last race, all three of us winning on Opening Day at 9 to 2. Padraig Kennelly, like a big leprechaun with a long, white beard, entertained the boys with Irish songs and betting tips. He even managed to persuade them to recite poetry in public with what Mrs Kennelly called 'panache'. We ended up at the Kennellys' for 'tea' at nine and a night of pub-crawling which would have horrified the boys' mother. They didn't drink, but they and other children sang along with us and fell asleep in our laps.

Coming back to Notting Hill on Sunday afternoon was a little like returning to Beirut a few years ago. At Beirut airport then, a taxi driver had to decide to which neighbourhoods he could safely go. Mus- lims avoided some areas, Christians others. The first taxi I asked to take me to Notting Hill on Sunday convinced me the city was aflame. 'Notting Hill?' he asked, his shock implying I had asked him to drop us in Hastings in 1066. 'No bloody way, guy. Taxis have been overturned and set on fire. Nobody will take you.'

When I said this seemed unlikely, he answered, 'Maybe not this year, but it's happened in the past.'

Later, another driver appeared. He was pleasant, an older man who told us he had fought in the war. He seemed to regard taking us to Notting Hill as a challenge. We found the area sealed with police barri- cades, the way the militias used to seal off their turfs in Beirut. We went south to Westbourne Grove. Here, I got out of the cab and asked the policeman if we could drive home. We talked, I mentioned the boys and the luggage, and he finally relented — just as the militiamen in Beirut used to. Then a car coming out blocked our way. Inside were three young men, all black, who asked the policeman whether they would be able to re-enter.

Before the policeman could answer, another young black man, in jeans and carrying a two-way radio, walked up to the car and asked its occupants for their pass. He was a Carnival steward. When they said they had left the pass at home, he said, Then go home and get it.'

Pass? I remembered the passes issued by the militias in Beirut, the possession of which by a resident or journalist was tacit acknowledgment of the impotence of gov- ernment. The policeman put his arm around the steward and said to the young men, 'It looks like I don't have to do anything. He just told you.' On the one hand, this was a demonstration of com- munity policing, a diplomatic way for a White policeman to avoid the confrontation which could have turned the Carnival ugly. In another way, it was a recognition that, last weekend at least, authority in the streets did not belong to 'legitimate author- ity', as represented by the police, but to the people and the stewards of the Notting Hill Carnival. Perhaps there was no other way. Or perhaps next year they will hire the bouncer from Gigi's.