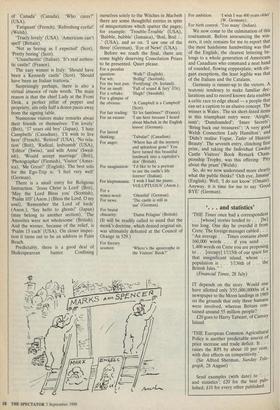 IT depends on the story. Would one have allotted only 3/55,000,000ths of a newspaper to the Moon landings in 1969 on the grounds that only three humans were involved, whereas Britain con- tained around 55 million people? £20 goes to Harry Tabeart, of Canvey Island.

`THE European Common Agricultural Policy is another predictable source of price increase and trade deficit. It . . • raises the RPI by about 10 per cent, with dire effects on competitivity.'

Send examples (with date) to • and statistics'; £20 for the best pub- lished; £10 for every other published.