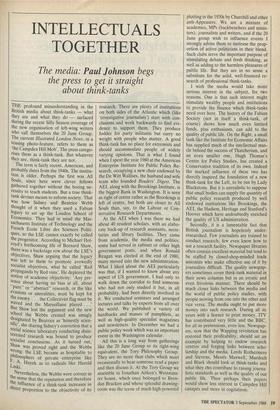 the press to get it straight about think-tanks

THE profound misunderstanding in the British media about think-tanks — what they are and what they do — surfaced during the recent Silly Season coverage of the new organisation of left-wing writers who call themselves the 20 June Group. The current Illustrated London News, in a teasing photo-feature, refers to them as `the Campden Hill Mob'. The press catego- rises them as a think-tank. But whatever they are, think-tank they are not.

The term is fairly recent, American, and probably dates from the 1940s. The institu- tion is older. Perhaps the first was All Souls, since here were clever fellows gathered together without the boring ne- cessity to teach students. But a true think- tank devises means to reform society. That was how Sidney and Beatrice Webb thought of it when they used a Fabian legacy to set up the London School of Economics. They had in mind the Mas- sachusetts Institute of Technology and the French Ecole Libre des Sciences Politi- ques, so the LSE cannot exactly be called the progenitor. According to Michael Hol- royd's forthcoming life of Bernard Shaw, there was a backstage row about the LSE's objectives, Shaw arguing that the legacy was left to them to ' promote avowedly socialist objectives, what he called 'Red propaganda by Red vans'. He deplored the notion of academic objectivity: 'Any pre- tence about having no bias at all, about

pure" or "abstract" research, or the like evasions or unrealities, must be kept for the enemy . . . the Collectivist flag must be waved and the Marseillaise played . . But Shaw lost the argument and the new school the Webbs created was smugly designated by Beatrice as 'honestly scien- tific', she sharing Sidney's conviction that a social science laboratory conducting disin- terested research was bound to produce socialist conclusions. As it turned out, Shaw was proved right and the Webbs wrong: the LSE became as hospitable to Philosophers of private enterprise like F. A. Hayek as to radicals like Harold

Nevertheless, the Webbs were correct in the sense that the reputation and therefore the influence of a think-tank increases in direct proportion to the objectivity of its

research. There are plenty of institutions on both sides of the Atlantic which (like 'investigative journalists') start with con- clusions and work backwards to find evi- dence to support them. They produce fodder for party militants but carry no weight with people who matter. A good think-tank has no place for extremists and should accommodate people of widely varying opinions. That is what I found when I spent the year 1980 at the American Enterprise Institute for Public Policy Re- search, occupying a new chair endowed by the De Witt Wallises, the husband and wife team who founded Readers' Digest. The AEI, along with the Brookings Institute, is the biggest Bank in Washington. It is seen as right of centre rather as the Brookings is left of centre, but both are closer to All Souls than, say, to the Labour or Con- servative Research Departments.

At the AEI when I was there we had about 40 resident scholars, with an elabo- rate back-up of research assistants, secre- taries and library facilities. They came from academia, the media and politics: some had served in cabinet or other high government posts, and when Ronald Reagan was elected at the end of 1980, many moved into the new administration. What I liked about the AEI particularly was that, if I wanted to know about any aspect of US government, I had only to walk down the corridor to find someone who had not only studied it but, in all probability, had been directly involved in it. We conducted seminars and arranged lectures and talks by experts from all over the world. We published a variety of hardbacks and masses of pamphlets, as well as high-quality specialist magazines and newsletters. In December we had a public policy week which was an important event in the Washington calendar.

All this is a long way from gatherings like the 20 June Group or its right-wing equivalent, the Tory Philosophy Group. They are no more than clubs which meet occasionally to hear someone read a paper and then discuss it. At the Tory Group we assemble in Jonathan Aitken's Westmins- ter house, which once belonged to Bren- dan Bracken and whose splendid drawing- room was the scene of much high-powered plotting in the 1930s by Churchill and other anti-Appeasers. We are a mixture of academics, MPs (backbenchers and minis- ters), journalists and writers, and if the 20 June group wish to influence events I strongly advise them to increase the prop- ortion of active politicians in their blend. Such clubs serve the important purpose of stimulating debate and fresh thinking, as well as adding to the harmless pleasures of public life. But they are in no sense a substitute for the solid, well-financed re- search of professional think-tanks.

I wish the media would take more serious interest in the subject, for two reasons. One is that such interest might stimulate wealthy people and institutions to provide the finance which think-tanks need over here. The history of the Fabian Society (not in itself a think-tank, of course) shows how much even limited funds, plus enthusiasm, can add to the quality of public life. On the Right, a small tank like the Institute for Economic Affairs has supplied much of the intellectual mus- cle behind the success of Thatcherism, and an even smaller one, Hugh Thomas's Centre for Policy Studies, has created a Conservative tradition of its own. Indeed the marked influence of these two has directly inspired the foundation of a new think-tank for the Left, to be run by Lady Blackstone. But it is unrealistic to suppose that small bodies can supply the quantity of public policy research produced by well endowed institutions like Brookings, the AEI, the Hudson, Heritage and Stanford's Hoover which have undoubtedly enriched the quality of US administration.

Secondly, it is a lamentable fact that British journalism is hopelessly under- researched. Few journalists are trained to conduct research; few even know how to use a research facility. Newspaper libraries often contain excellent material but tend to be staffed by closed-shop-minded trade unionists who make effective use of it by journalists difficult. The quality newspap- ers sometimes cover think-tank material in their news columns but in an erratic and even frivolous manner. There should be much closer links between the media and the world of public policy studies, with people moving from one into the other and vice versa. The media ought to put more money into such research. During all its years with a licence to print money, ITV has contributed very little and the BBC, for all its pretensions, even less. Newspap- ers, now that the Wapping revolution has restored their profitability, should set an example by helping to endow research centres and forging links between scho- larship and the media. Lords Rothermere and Stevens, Messrs Maxwell, Murdoch and Black should look at think-tanks and what they can contribute to raising journa- listic standards as well as the quality of our public life. Then perhaps their papers would show less interest in Campden Hill canapes and more in cogitations.