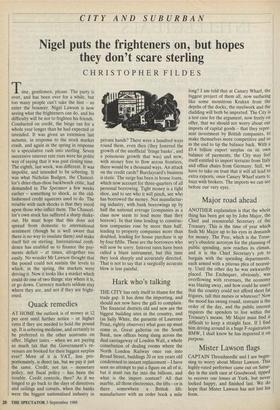 THE CITY has only itself to blame for the trade gap. It has done the importing, and should not now have the gall to complain. The financial districts old and new are the biggest building sites in the country, and (as Sally White, the guruette of Laurence Prust, rightly observes) what goes up must come in. Great gallerias on the South Bank, new offices being slung across the dual carriageway of London Wall, a whole conurbation of dealing rooms where the North London Railway once ran into Broad Street, buildings 20 or ten years old condemned to instant replacement — I have seen no attempt to put a figure on all of it, but it must run far into the billions, and what is the import content? All that marble, all those electronics, the lifts — or is there somewhere a British lift- manufacturer with an order book a mile long? I am told that at Canary Wharf, the biggest project of them all, now surfacing like some monstrous Kraken from the depths of the docks, the steelwork and the cladding will both be imported. The City is a test case for the argument, now freely on offer, that we should not worry about our imports of capital goods — that they repre- sent investment by British companies, to make themselves more competitive and so in the end to tip the balance back. With a £9.4 billion export surplus on its own balance of payments, the City may feel itself entitled to import terrazzo from Italy and office chairs from Germany. Still, we have to take on trust that it will all lead to extra exports, once Canary Wharf starts tc buzz with brokers. The imports we can see before our very eyes.