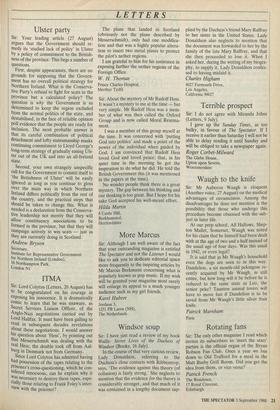 Sir: Lord Colyton (Letters, 20 August) has to be congratulated on his courage in exposing his innocence. It is dramatically comic to learn that he was unaware, as Secret Services Liaison Officer, of the Anglo-Nazi negotiations carried out by Lord Halifax. It must have been galling to read in subsequent decades revelations about these negotiations. I would answer his question about 'Hess', by pointing out that Messerschmidt was dealing with the real Hess; the double took off from Aal- burg in Denmark not from Germany. Since Lord Colyton has admitted having had possession of the tapes relating to the prisoner's cross-questioning, which he con- sidered innocuous, can he explain why it was necessary to destroy these tapes, espe- cially those relating to Frank Foley's inter- view with the prisoner? The plane that landed in Scotland (obviously not the plane described by Messerschmidt), only had one modifica- tion and that was a highly popular altera- tion to insert two metal plates to protect the pilot's nether regions.

I am grateful to him for his assistance in exposing further the nether regions of the Foreign Office.