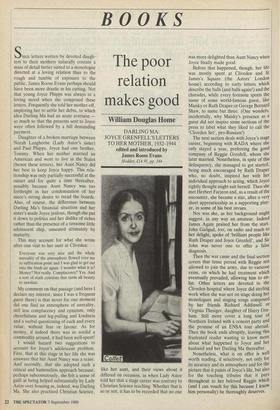 Since letters written by devoted daugh- ters to their mothers naturally contain a mass of detail better suited to a monologue directed at a loving relation than to the rough and tumble of exposure to the public, James Roose Evans perhaps should have been more drastic in his cutting. Not that young Joyce Phipps was always in a loving mood when she composed these letters. Frequently she told her mother off, imploring her to settle her debts, to which idea Darling Ma had an acute aversion so much so that the presents sent to Joyce were often followed by a bill demanding payment.

Daughter of a broken marriage between Norah Langhorne (Lady Astor's sister) and Paul Phipps, Joyce had one brother, Tommy. When her mother married an American and went to live in the States (hence these letters), her Aunt Nancy did her best to keep Joyce happy. This rela- tionship was only partially successful at the outset and for quite a time thereafter, possibly because Aunt Nancy was too forthright in her condemnation of her niece's strong desire to tread the boards. Also, of course, the difference between Darling Ma's financial situation and her sister's made Joyce jealous, though she put it down to politics and her dislike of riches rather than the presence of a tiresome little adolescent chip, unseated ultimately by maturity.

This may account for what she wrote after one visit to her aunt at Cliveden:

Everyone was very nice and the whole unreality of the atmosphere flowed over me to suffocation point and I was glad to get out into the fresh air again. I wonder what it is? Money? Not really. Complacency? Yes. And a sort of stark cynicism that turns all beauty to sawdust.

My comment on that passage (and here I declare my interest, since I was a frequent guest there) is that never for one moment did one find an atmosphere of unreality, still less complacency and cynicism, only cheerfulness and leg-pulling and kindness and a verbal questioning of each and every value, without fear or favour. As for money, if indeed there was so sordid a commodity around, it had been well-spent!

I would hazard two suggestions to account for Joyce's adolescent problem. First, that at this stage in her life she was unaware that her Aunt Nancy was a tease. And secondly, that she adopted such a critical and humourless approach because, perhaps subconsciously, she felt a sense of guilt at being helped substantially by Lady Astor over housing as, indeed, was Darling Ma. She also practised Christian Science,

like her aunt, and their views about it differed on occasion, as when Lady Astor told her that a stage career was contrary to Christian Science teaching. Whether that is so or not, it has to be recorded that no one was more delighted than Aunt Nancy when Joyce finally made good.

Before that happened, though, her life was mostly spent at Cliveden and St James's Square (the Astors' London house) according to early letters which describe the balls (and balls again!) and the charades, while every footnote sports the name of some world-famous guest, like Maisky or Ruth Draper or George Bernard Shaw, to name but three. (One wonders, incidentally, why Maisky's presence as a guest did not inspire some sections of the press to label what they liked to call the `Cliveden Set', pro-Russian!)

The next section deals with Joyce's stage career, beginning with RADA where she only stayed a year, preferring the good company of Reggie Grenfell, whom she later married. Nonetheless, in spite of this delinquency, she managed to get started, being much encouraged by Ruth Draper who, no doubt, inspired her with her individual approach to acting, which Joyce rightly thought might suit herself. Then she met Herbert Farjeon and, as a result of the encounter, she became a star, after a very short apprenticeship as a supporting play- er, in some of his best revues.

Nor was she, as her background might suggest, in any way an amateur. Indeed James Agate praised her from the start. John Gielgud, too, on radio and much to her delight, spoke of 'brilliant people like Ruth Draper and Joyce Grenfell', and Sir John was never one to offer a false diagnosis.

Then the war came and the final section covers that tense period with Reggie not allowed to join the army, due to varicose veins, on which he had treatment which eventually prevailed, allowing him to en- list. Other letters are devoted to the Cliveden hospital where Joyce did sterling work when she was not on stage doing her monologues and singing songs composed by her friends Richard Addinsell or Virginia Thesiger, daughter of Harry Gra- ham. Still more cover a long tour of Northern Ireland with a concert party and the promise of an ENSA tour abroad. Then the book ends abruptly, leaving this frustrated reader wanting to know more about what happened to Joyce and her husband and her Darling Ma thereafter. Nonetheless, what is on offer is well worth reading, if selectively, not only for its accuracy and its atmosphere and for the picture that it paints of Joyce's life, but also for the touching tributes that it pays throughout to her beloved Reggie which (and I can vouch for this because I know him personally) he thoroughly deserves.