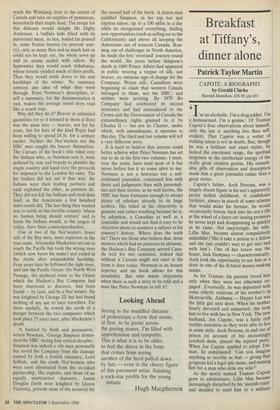 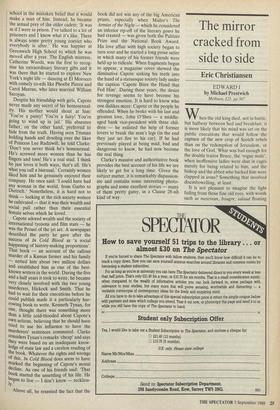 CAPOTE: A BIOGRAPHY by Gerald Clarke

I'm an alcoholic. I'm a drug addict. I'm a homosexual. I'm a genius.' Of Truman Capote's four observations about himself, only the last is anything less than self- evident. That Capote was a writer of striking talent is not in doubt. But, though he was a brilliant and exact stylist, he lacked the emotional range, the spiritual largeness or the intellectual energy of the really great creative genius. His remark- able gifts of observation and description made him a great journalist rather than a great writer.

Capote's father, Arch Persons, was a largely absent figure in his son's apparently pretty hellish childhood. A confidence trickster, always in search of some scheme that would make his fortune, he would occasionally breeze back into his son's life at the wheel of a fancy car issuing promises he never kept and disappearing as quickly as he came. Not surprisingly, his wife, Lillie Mae, became almost compulsively unfaithful (`She'd take a notion to a fellow and she just couldn't wait to get into bed with him'). One of her lovers was the boxer, Jack Dempsey — characteristically, Arch took the opportunity to use him as a draw in one of his ill-fated money-making stunts.

As for Truman, his parents 'loved him only when they were not otherwise en- gaged'. Eventually, he was deposited with some elderly relations of his mother's in Monroeville, Alabama — Harper Lee was the little girl next door. When his mother finally divorced and remarried, she took him to live with her in New York. The new husband, Joe Capote, was a fairly rich textiles executive so they were able to live in some style. Arch Persons, in and out of prison on account of his increasingly crooked deals, played the injured party. When Joe Capote applied to adopt Tru- man, he complained: 'Can you imagine anything so terrible as that — giving that gorgeous kid a legal spic name, and naming him for a man who stole my wife?'

As the newly named Truman Capote grew to adolescence, Lillie Mae became increasingly disturbed by his 'sissyish traits' and decided to send him to a military school in the mistaken belief that it would make a man of him. Instead, he became the sexual prey of the older cadets: 'It was as if I were in prison. I've talked to a lot of prisoners and I know what it's like. There is always some pretty young convict who everybody is after.' He was happier at Greenwich High School to which he was moved after a year. The English mistress, Catherine Woods, was the first to recog- nise his extraordinary literary gifts and it was there that he started to explore New York's night life — dancing at El Morocco with comely co-eds like Phoebe Pierce and Carol Marcus, who later married William Saroyan.

Despite his friendship with girls, Capote never made any secret of his homosexual- ity. His mother would shout at him: `You're a pansy! You're a fairy! You're going to wind up in jail.' His absentee father, on the other hand, preferred to hide from the truth. Having seen Truman holding hands and drooling over the likes of Princess Lee Radziwill, he told Clarke: `Don't you never think he's homosexual. He's screwed more women than he has fingers and toes! He's a real stud. I think he just loves it both ways, that's all. He's what you call a bisexual.' Certainly women liked him and he genuinely enjoyed their company. He once said: 'I could have had any woman in the world, from Garbo to Dietrich.' Nonetheless, it is hard not to think — looking at the rich society women he cultivated — that it was their wealth and social pull rather than their essential female selves which he loved.

Capote adored wealth and the society of international tycoons and film stars — he was the Proust of the jet set. A newspaper described the party he gave after the success of In Cold Blood as 'a social happening of history-making proportions'. That book — an account of the callous murder of a Kansas farmer and his family — netted him about two million dollars and established him as one of the best- known writers in the world. During the five and a half years it took to write, he became very closely involved with the two young murderers, Hickock and Smith. That he had to wait for their executions before he could publish made it a particularly har- rowing book to write. Kenneth Tynan, for one, thought there was something more than a little cold-blooded about Capote's own actions, believing that he should have tried to use his influence to have the murderers' sentences commuted. Clarke considers Tynan's remarks 'cheap' and says they were based on an inadequate know- ledge of state law and a careless reading of the book. Whatever the rights and wrongs of this, In Cold Blood does seem to have Marked the beginning of Capote's moral decline. As one of his friends said: 'That book started the unsettling of his life. He began to live — I don't know — reckless- ly.'

Above all, he resented the fact that the book did not win any of the big American prizes, especially when Mailer's The Armies of the Night — which he considered an inferior rip-off of the literary genre he had created — was given both the Pulitzer Prize and the National Book Award. His love affair with high society began to turn sour and he started a long prose satire in which many of his former friends were held up to ridicule. When fragments began to appear, a magazine cover showed the diminutive Capote sinking his teeth into the hand of a statuesque society lady under the caption 'Capote Bites the Hand that Fed Him'. During these years, the desire for revenge seems to have become his strongest emotion. It is hard to know who one dislikes more: Capote or the people he offended. When he broke with his last and greatest love, John O'Shea — a middle- aged bank vice-president with three chil- dren — he enlisted the help of former lovers to break the man's legs (in the end they just set fire to his car). If he had previously played at being mad, bad and dangerous to know, he had now become the real thing.

Clarke's massive and authoritative book provides the best account of his life we are likely to get for a long time. Given the subject matter, it is remarkably dispassion- ate and contains some interesting photo- graphs and some excellent stories — many of them pretty gamy, in a Clause 28-ish kind of way.