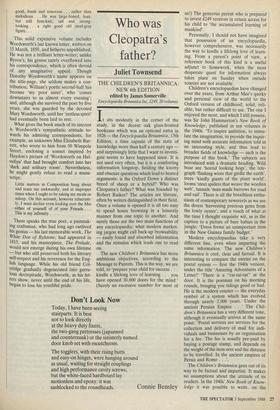 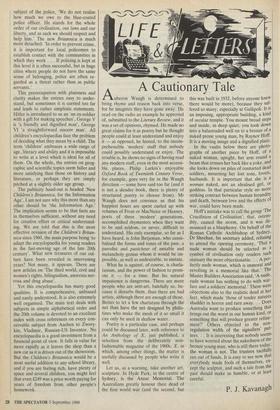 Who was Cleopatra's father?

It sits modestly in the corner of the study, in the decent oak glass-fronted bookcase which was an optional extra in 1926 — the Encyclopaedia Britannica, 13th Edition, a time capsule of the state of knowledge more than half a century ago and surprisingly little that I want to investi- gate seems to have happened since. It is not used very often, but it is a comforting information longstop, fielding the knotty and obscure questions which lead to heated arguments: is the Oxford Down a distinct breed of sheep or a hybrid? Who was Cleopatra's father? What was founded by Robert Raikes? The articles are literate, often by writers distinguished in their field. Once a volume is opened it is all too easy to spend hours browsing in a leisurely manner from one topic to another. And surely those are the two main functions of any encyclopaedia; what modern market- ing jargon might call back-up browsability — easily found and absorbed information and the stimulus which leads one to read on.

The new Children's Britannica has more ambitious objectives, according to the Message to Parents. This is the way, we are told, to 'prepare your child for success . . . kindle a lifelong love of learning . . . you have opened 30,000 doors for the mind.' (Surely an excessive number for most of us!) The generous parent who is prepared to invest £249 receives in return access for his child to 'the accumulated learning of mankind'.

Personally, I should not have imagined that possession of an encyclopaedia, however comprehensive, was necessarily the way to kindle a lifelong love of learn- ing. From a parent's point of view, a reference book of this kind is a useful adjunct to homework, when the most desperate quest for information always takes place on Sunday when outside sources are not available.

Children's encyclopaedias have changed over the years, from Arthur Mee's quirky and personal view of the world to the Oxford version of childhood; solid, reli- able, but rather difficult to use. The one I enjoyed the most, and which I still possess, was Sir John Hammerton's New Book of Knowledge, published in ten volumes in the 1940s. `To inspire ambition, to stimu- late the imagination, to provide the inquir- ing mind with accurate information told in an interesting style, and thus lead to broader fields of knowledge — such is the purpose of this book.' The subjects are introduced with a dramatic heading. Wild boar are 'horrid looking hogs', the tele- graph 'flashing wires that girdle the earth', trees 'kindly giants of the plant world', looms 'steel spiders that weave the woollen web', tunnels 'man-made burrows for road and rail'. There is all the breathless enthu- siasm of contemporary newsreels as we see the divers 'harvesting precious gems from the lowly oyster', and a touch of what at the time I thought exquisite wit, as in the caption to a picture of bare babies in the jungle: 'Dress forms an unimportant item in the New Guinea family budget.'

Modern encyclopaedias take a very different line, even when imparting the same information. The new Children's Britannica is cool, clear and factual. It is interesting to compare the entries on the postal system — first the 1940s version, under the title 'Amazing Adventures of a Letter!' There is a "rat-tat-tat" at the door. It is the postman on his morning rounds, bringing you tidings good or bad. He is the modern courier — the everyday symbol of a system which has evolved through nearly 2,000 years. Under the ancient Persian Empire . . .' The Chil- dren's Britannica has a very different tone, although it eventually arrives at the same point: 'Postal services are services for the collection and delivery of mail for indi- viduals and businesses by an organisation for a fee. The fee is usually pre-paid by buying a postage stamp, and depends on the weight of the item sent and the distance to be travelled. In the ancient empires of Persia and Rome . .

The Children's Britannica goes out of its way to be factual and impartial. It makes no assumptions about the attitude of its readers. In the 1940s' New Book of Know- ledge it was possible to write, on the subject of the police, 'We do not realise how much we owe to the blue-coated police officer. He stands for the whole order of our civilisation, our laws and our liberty, and as such we should respect and help him.' The new Britannica is much more detached: 'In order to prevent crime, it is important for local policemen to establish contact with the communities in which they work . . . If policing is kept at this level it is often successful, but in huge cities where people do not have the same sense of belonging, police are often re- garded as a threat rather than as public servants.'

This preoccupation with plainness and clarity makes the entries easy to under- stand, but sometimes it is carried too far and leads to rather simplistic statements. Hitler is introduced to us an 'an ex-soldier with a gift for making speeches', George V is 'a friendly and dignified man', George VI 'a straightforward sincere man'. All children's encyclopaedias face the problem of deciding what they mean by a child. The term 'children' embraces a wide range of age, literacy and ability and it is impossible to write at a level which is ideal for all of them. On the whole, the entries on geog- raphic and scientific topics seem fuller and more satisfying than those on history and literature, or perhaps they are simply pitched at a slightly older age group.

The publicity hand-out is headed 'New Children's Britannica, for the Information Age'. I am not sure why this more than any other should be 'the Information Age.' The implication seems to be that facts are in themselves sufficient, without any need for creative effort or critical understand- ing. We are told that this is the most effective revision of the Children's Britan- nica since 1960, the main purpose being `to adapt the encyclopaedia for young readers in the fast-moving age of the late 20th century'. What new treasures of our cul- ture have been revealed in intervening years? Not many, it appears. There are new articles on 'The third world, civil and women's rights, bilingualism, anorexia ner- vosa and drug abuse'.

Yet this encyclopaedia has many good qualities. It is comprehensive, unbiased and easily understood. It is also extremely well organised. The main text deals with subjects in simple alphabetical order and the 20th volume is devoted to an excellent index with cross references on every con- ceivable subject from Aachen to Zwory- kin, Vladimir, Russian-US Inventor. No encyclopaedia is a good investment from a financial point of view. It falls in value far more rapidly as it leaves the shop than a new car as it is driven out of the showroom. But the Children's Britannica would be a most useful addition to any school library, and if you are feeling rich, have plenty of space and several children, you might feel that even £249 was a price worth paying for years of freedom from other people's homework.