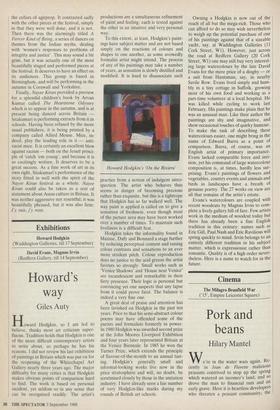 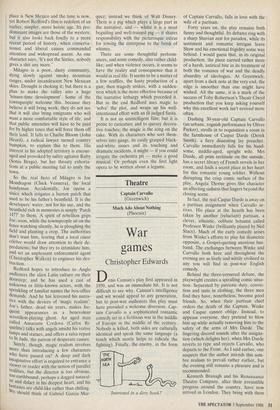 We're in the water wars again. Re- cently in Jean de Florette malicious peasants contrived to stop up the spring which watered an incomer's land, and so drove the man to financial ruin and an early grave. Here it is heartless developers who threaten a peasant community; the

place is New Mexico and the time is now, yet Robert Redford's film is redolent of an earlier, simpler, more heroic age. Its pre- dominant images are those of the western; but it also looks back fondly to a more recent period of history, when conserva- tionist and liberal causes commanded attention and widespread assent. As one character says, 'It's not the Sixties, nobody gives a shit any more.'

Milagro is a poor, dusty community, dying slowly against smoky mountain ranges, under incandescent New Mexican skies. Drought is choking it; but there is a plan to make the valley into a huge leisure-time development'. Some of the townspeople welcome this, because they believe it will bring work; they do not see that it will also bring emigrants who will want a more comfortable style of life, and that public amenities will have to be paid for by higher taxes that will force them off their land. It falls to Charlie Bloom (John Heard), a radical lawyer turned country bumpkin, to explain this to them. His interest in his adopted territory is encour- aged and provoked by sultry agitator Ruby (Sonia Braga), but her throaty exhorta- tions at a public meeting fail to unify the town.

So the real hero of Milagro is Joe Mondragon (Chick Vennera), the local handyman. Accidentally, Joe opens a sluice which irrigates a barren patch that used to be his father's beanfield. It is the developers' water, not for his use, and the beanfield rich in memories is simply 'Patch 1477' to them. A spirit of rebellion grips Joe; soon, while the townspeople sit on the fence watching silently, he is ploughing the field and planting a crop. The authorities don't trust him, fearing that a local cause celebre would draw attention to their de- predations; but they try to intimidate him, and set an unpleasant enforcement agent (Christopher Walken) to engineer his des- truction.

Redford hopes to introduce to Anglo audiences the alien Latin culture on their doorstep; and he has used a cast of unknown or little-known actors, with the sprinkling of familiar names the box-office demands. And he has leavened his narra- tive with the devices of 'magic realism': Joe's father, dead six years, makes fre- quent appearances as a benevolent accordion-playing ghost. An aged man called Amarante Cordova (Carlos Ri- quelme) talks with angels amidst his votive lamps and statues, and offers a salsa repast to St Jude, the patron of desperate causes.

Surely, though, magic realism involves more than introducing a few characters Who have passed on? A deep and dark imaginative effort is required to entrance a viewer or reader with the notion of parallel realities, but the director is too obvious, too earthbound, perhaps a dogged natural- ist and didact in his deepest heart, and his fantasies are child-like rather than chilling. We should think of Gabriel Garcia Mar-

quez; instead we think of Walt Disney. There is a pig which plays a large part in the narrative, and — whilst it is a most beguiling and well-trained pig — it shares responsibility with the picturesque extras for towing the enterprise to the brink of whimsy.

There are some thoughtful perform- ances, and some comedy, also rather child- like; and when violence occurs, it seems to have the reality and consequence that it would in real life. It seems to be a matter of a few scuffles, the hasty production of a gun; then tragedy strikes, with a sudden- ness which is the more effective because of the narrative lethargy which preceded it. But in the end Redford uses magic to 'solve' the plot, and wraps up his well- intentioned effort with an ill-judged fiesta.

It is not an unintelligent film; but it is prone to caricature and to queasy decora- tive touches; the magic is the icing on the cake. With its characters who sort them- selves into gangs, its easily grasped black- and-white issues and its touching and dramatic incidents, it might — if you could irrigate the orchestra pit — make a good musical. Or perhaps even the first light opera to be written about a legume.