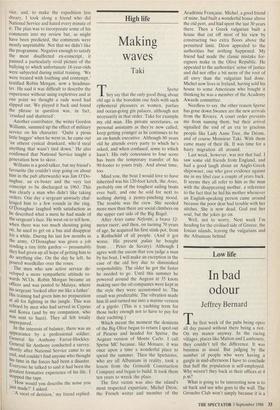 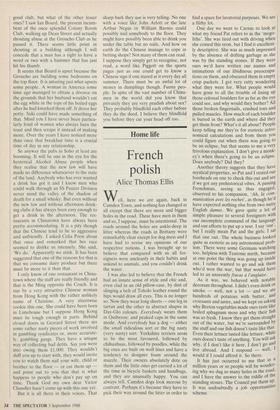 The first week of the pubs being open all day passed without there being a riot. On my manor anyway. In the racing villages, places like Malton and Lambourn, they couldn't tell the difference. It was business as usual. But judging by the number of people who were having a gargle in mid-afternoon I have to conclude that half the population is self-employed. Why weren't they back in their offices at 4 p.m?

What is going to be interesting now is to sit back and see who goes to the wall. The Groucho Club won't simply because it is a good club, but what of the other lesser ones? I saw Ian Board, the present incum- bent of the once splendid Colony Room Club, walking up Dean Street and actually shouting abuse at the Groucho Club as he passed it. There seems little point in shouting at a building although I will concede that a man has a right to have a word or two with a hammer that has just hit his thumb.

It seems that Board is upset because the Groucho are building some bedrooms on the top floor. It is amazing just what upsets some people. A woman in America some time ago managed to obtain a divorce on the grounds that her husband wouldn't eat the egg white in the tops of his boiled eggs after he had knocked them off. It drove her potty. Saki could have made something of that. Mind you I have never been particu- larly fond of women who always burn the toast and then scrape it instead of making more. Over the years I have noticed more than once that breakfast time is a crucial time of day in any relationship.

So anyway the pubs in Soho at least are booming. It will be one in the eye for the hysterical Alcohol Abuse people when they realise that the new law will have made no difference whatsoever to the state of the land. Anybody who has ever wanted a drink has got it and I know men who could walk through an SS Panzer Division never mind the valley of the shadow of death for a small whisky. But even without the new law and without afternoon drink- ing clubs it has always been easy enough to get a drink in the afternoon. The res- taurants in Chinatown have always been pretty accommodating. It is a pity though that the Chinese tend to be so aggressive and unfriendly. I asked Celia Poon about that once and remarked that her race seemed to dislike us intensely. She said, We do.' Apparently we stink. It has been suggested that one of the reasons for that is that we consume dairy produce but there must be more to it than that.

I only know of one restaurant in China- town where the staff are really friendly and that is the Ming opposite the Coach. It is run by a very attractive Chinese woman from Hong Kong with the rather unlikely name of Christine. A very streetwise cookie this one. She could have been born in Limehouse but I suppose Hong Kong must be tough enough in parts. Behind closed doors in Gerrard Street there are some rather nasty pieces of work involved in gambling syndicates or, more accurate- ly, gambling gangs. They have a unique way of collecting bad debts. Say you were into owing them £1,000. They wouldn't duff you up to start with, they would invite you to watch them nail your wife, child or brother to the floor — or cut them up and point out to you that that is what happens to people who don't pay up on time. Thank God my own dear Victor Chandler hasn't come up with this one yet.

But it is all there in their voices. That sharp bark they use is very telling. No one with a voice like John Arlott or the late Arthur Negus or William Barnes could possibly nail somebody to the floor. They might have possibly been able to drink you under the table but no nails. And how on earth do the Chinese manage to cope in betting shops? Not many of them can read. I suppose they simply get to recognise, not read, a word like Piggott on the sports pages just as one could get to know a Chinese sign if one stared at it every day all summer. There must be an awful lot of money in dumplings though. Funny peo- ple. In spite of the vast number of China- men in the world did you know that privately they are very prudish about sex? They probably blindfold each other before they do the deed. I believe they blindfold you before they cut your head off too.