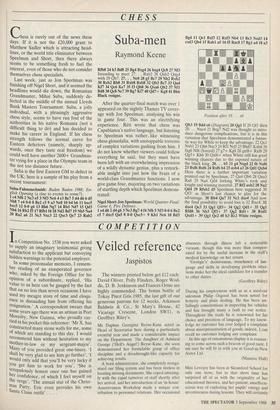 Chess is rarely out of the news these days. If it is not the £20,000 grant to Matthew Sadler which is attracting head- lines, or the world title eliminator between Speelman and Short, then there always seems to be something fresh to fuel the interest, even of those who do not consider themselves chess specialists.

Last week, just as Jon Speelman, was finishing off Nigel Short, and it seemed the headlines would die down, the Romanian Grandmaster, Mihai Suba, suddenly de- fected in the middle of the annual Lloyds Bank Masters Tournament. Suba, a jolly individual, with a pleasingly aggressive chess style, seems to have run foul of the authorities in his native Romania (not a difficult thing to do) and has decided to make his career in England. If his chess strength follows the normal curve for Eastern defectors (namely, sharply up- wards, once they taste real freedom) we could well have another 2600+ Grandmas- ter vying for a place in the Olympic team in the not too distance future.

Suba is the first Eastern GM to defect in the UK; here is a sample of his play from a recent tournament:

After the quarter-final match was over 1 appeared on the nightly Thames TV cover- age with Jon Speelman, analysing his win in game four. This was an electrifying experience. Reti wrote that chess was Capablanca's native language, but listening to Speelman was rather. like witnessing chess glossolalia, with unstoppable torrents of complex variations gushing from him. I do not know whether viewers could follow everything he said, but they must have been left with an overwhelming impression of a wildly dynamic genius, plus a remark- able insight into just how the brain of a world-class Grandmaster functions. I now give game four, majoring on two variations of startling depth which Speelman demons- trated: