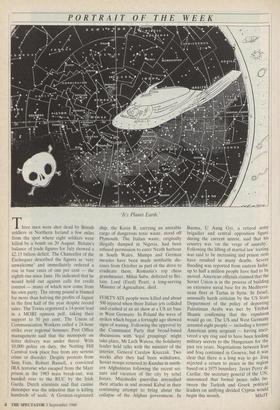 Three men were shot dead by British soldiers in Northern Ireland a few miles from the spot where eight soldiers were killed by a bomb on 20 August. Britain's balance of trade figures for July showed a £2.15 billion deficit. The Chancellor of the Exchequer described the figures as 'very unwelcome' and immediately ordered a rise in base rates of one per cent — the eighth rise since June. He indicated that he would hold out against calls for credit control — many of which now come from his own party. The strong pound is blamed for more than halving the profits of Jaguar in the first half of the year despite record sales. The Tories registered a 14-point lead in a MORI opinion poll, taking their support to 50 per cent. The Union of Communication Workers called a 24-hour strike over regional bonuses: Post Office management said that the monopoly on letter delivery was under threat. With 10,000 police on duty, the Notting Hill Carnival took place free from any serious crime or disorder. Despite protests from Sinn Fein, Robert Russell, a convicted IRA terrorist who escaped from the Maze prison in the 1983 mass break-out, was handed over to the RUC by the Irish Garda. Dutch scientists said that canine distemper was the infection that is killing hundreds of seals. A German-registered ship, the Karin B, carrying an unstable cargo of dangerous toxic waste, stood off Plymouth. The Italian waste, originally illegally dumped in Nigeria, had been refused permission to enter Neath harbour in South Wales. Mumps and German measles have been made notifiable dis- eases from October as part of the drive to eradicate them. Romania's top chess grandmaster, Mihai Suba, defected to Bri- tain. Lord (Fred) Peart, a long-serving Minister of Agriculture, died.

FORTY-SIX people were killed and about 500 injured when three Italian jets collided and crashed at an air show at a US air base in West Germany. In Poland the wave of strikes which began a fortnight ago showed signs of waning. Following the approval by the Communist Party that broad-based discussions with 'legal groupings' might take place, Mr Lech Walesa, the Solidarity leader held talks with the minister of the interior, General Czeslaw Kiszczak. Two weeks after they had been withdrawn, Soviet troops returned to Kunduz in north- ern Afghanistan following the recent sei- zure and vacation of the city by rebel forces. Mujahedin guerrillas intensified their attacks in and around Kabul in their continuing attempt to bring about the collapse of the Afghan government. In

Burma, U Aung Gyi, a retired army brigadier and central opposition figure during the current unrest, said that his country was 'on the verge of anarchy'. Following the lifting of martial law' looting was said to be increasing and prison riots have resulted in many deaths. Severe flooding was reported from eastern India: up to half a million people have had to be moved. American officials claimed that the Soviet Union is in the process of building an extensive naval base for its Mediterra- nean fleet at Tartus in Syria. In Israel, unusually harsh criticism by the US State Department of the policy of deporting Palestinian Arabs was met by Yitzhak Shamir confirming that the expulsion would go on. The US and West Germany arrested eight people — including a former American army sergeant — having unco- vered a spy ring said to have been feeding military secrets to the Hungarians for the past ten years. Negotiations between Iran and Iraq continued in Geneva; but it was clear that there is a long way to go. Iraq rejected a return to peace in the region based on a 1975 boundary. Javier Perez de Cuellar, the secretary general of the UN, announced that formal peace talks be- tween the Turkish and Greek political leaders on unifying divided Cyprus would