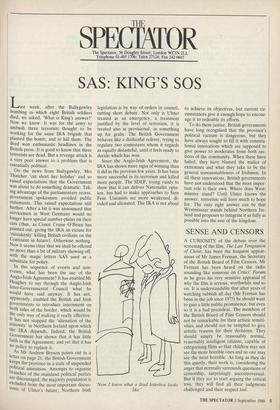 Last week, after the Ballygawley bombing in which eight British soldiers died, we asked, 'What is King's answer?' Now we know. It was for the army to ambush three terrorists thought to be working for the same IRA brigade that planted the bomb, and to kill them. The deed won enthusiastic headlines in the British press. It is good to know that three terrorists are dead. But a revenge attack is a very poor answer to a problem that is essentially political.

On the news from Ballygawley, Mrs Thatcher 'cut short her holiday' and so raised expectations that the Government was about to do something dramatic. Tak- ing advantage of the parliamentary recess, government spokesmen avoided public statements. This raised expectations still further. After a bit it was announced that servicemen in West Germany would no longer have special number-plates on their cars (thus, as Conor Cruise O'Brien has pointed out, giving the IRA an excuse for `mistakenly' killing British civilians on the Continent in future). Otherwise nothing. Now it seems clear that we shall be offered no more than a bit of military showing off, with the magic letters SAS used as a substitute for policy. In this sequence of events and non- events, what has been the use of the Anglo-Irish Agreement? It has enabled Mr Haughey to say through the Anglo-Irish Inter-Governmental Council what he would have said anyway. It has not, apparently, enabled the British and Irish governments to introduce internment on both sides of the border, which would be the only way of making it really effective. Ithas not stopped the 'alienation of the minority' in Northern Ireland upon which the IRA depends. Indeed, the British Government has shown that it has little faith in the Agreement, and yet that it has no policy to replace it. As Mr Andrew Bryson points out in a letter on page 21, the British Government keeps the province in a state of suspended Political animation. Attempts to organise branches of the mainland political parties are discouraged; the majority population is excluded from the most important discus- sions of Ulster's future; Northern Irish legislation is by way of orders in council, cutting short debate. Not only is Ulster treated as an emergency, a treatment justified by the level of terrorism, it is treated also as provisional, as something up for grabs. The British Government behaves like a disdainful referee, trying to regulate two contestants whom it regards as equally distasteful, until it feels ready to decide which has won.

Since the Anglo-Irish Agreement, the IRA has shown more signs of winning than it did in the previous few years. It has been more successful in its terrorism and killed more people. The SDLP, trying vainly to show that it can deliver Nationalist opin- ion, has had to make approaches to Sinn Fein. Unionists are more weakened, di- vided and alienated. The IRA is not about Wow I know what a dead letterbox looks like.' to achieve its objectives, but current cir- cumstances give it enough hope to encour- age it to redouble its efforts.

To do them justice, British governments have long recognised that the province's political vacuum is dangerous, but they have always sought to fill it with constitu- tional innovations which are supposed to give power to moderates from both sec- tions of the community. When these have failed, they have blamed the malice of extremists and what they take to be the general unreasonableness of Irishmen. In all these innovations, British governments have not understood that the most impor- tant role is their own. Where does West- minster stand? Until Ulster knows the answer, terrorism will have much to hope for. The only right answer can be that Westminster stands behind Northern Ire- land and proposes to integrate it as fully as possible into the rest of the kingdom.