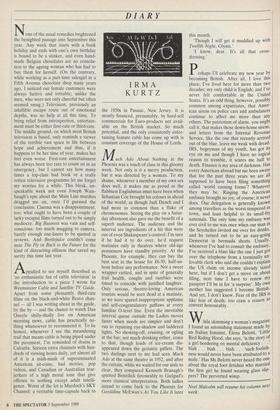 IRMA KURTZ None of the usual remedies brightened the benighted passage into September this year. Any week that starts with a bank holiday and ends with one's own birthday is bound to be a stinker, and even hand- made Belgian chocolates are no consola- tion to the ageing woman who has had to buy them for herself. (On the contrary, while working as a part-time salesgirl in a Fifth Avenue chocolate shop many years ago, I noticed our female customers were always furtive and irritable; unlike the men, who were not only cheerful but often seemed smug.) Television, previously an infallible escape route out of emotional depths, was no help at all this time. To bring relief from introspection, entertain- ment must be either first-rate or third-rate. The middle ground, on which most British television is based, only reminds a viewer of ,the terrible vast space in life between hope and achievement and thus, if it happens to be her time of year, makes her feel even worse. First-rate entertainment has always been too rare to count on in an emergency, but I cannot say how many times a top-class bad book or a really rotten television programme let me forget my worries for a while. This bleak, un- speakable week not even Joseph Warn- baugh's epic about the Main Line murders dragged me on, once I'd guessed the conclusion. Cinema was a disappointment, too; what ought to have been a couple of larky escapist films turned out to be simply mediocre. Big Business was vain and self- conscious: too much mugging to camera, barely enough one-liners to be quoted in reviews. And Beetlejuice couldn't come near The Fly or Back to the Future for the kind of distracting silliness that saved my sanity this time last year.

Appalled to see myself described as `an enthusiastic fan of cable television' in the introduction to a piece I wrote for Westminster Cable and Satellite TV Guide. Apart from some pleasantly third-rate films on the black-and-white Bravo chan- nel — all I was writing about in the guide, by the by — and the chance to watch Dan Quayle shilly-shally live on American morning news, cable has practically no- thing whatsoever to recommend it. To be honest, whenever I see the meandering trail that means cable is being piped under the pavement, I'm reminded of drains in Calcutta. Sixteen extra channels with hun- dreds of viewing hours daily, yet almost all of it is a mish-mash of superannuated American sit-corns, bad movies, pop videos, and Canadian or Australian tear- jerkers of a high moral tone that give offence to nothing except adult intelli- gence. Worst of the lot is Murdoch's SKY Channel: a veritable time-capsule back to the 1950s in Passaic, New Jersey. It is mostly financed, presumably, by hard-sell commercials for Euro-products not avail- able on the British market. So much potential, and the only consistently enter- taining feature cable has come up with is constant coverage of the House of Lords.

Much Ado About Nothing at the Phoenix was a touch of class in this gloomy week. Not only is it a merry production, but it was directed by a woman. To my shame, whenever a member of my own sex does well, it makes me as proud as the flabbiest Englishman must have been when Sebastian Coe brought his colours in ahead of the world; as though Judi Dench and I had more in common than a fluke of chromosomes. Seeing the play on a Satur- day afternoon also gave me the benefit of a superb audience. The audience and the interval are ingredients of a hit that were out of even Shakespeare's control; I'm sure if he had it to do over, he'd request matinees only in theatres where old-age pensioners have standby priority. At the Phoenix, for example, they can buy the best seat in the house for £6.50, half-an- hour before any performance. Not a sweet wrapper rattled, and in spite of generally frail health, coughs and rumbles were timed to coincide with justified laughter. Only serious, theatre-loving American tourists would be seen dead at a matinee, so we were spared inappropriate applause and self-congratulatory guffaws at every familiar 0-level line. Even the inevitable interval queue outside the Ladies moves faster when needs are simpler and don't run to repairing eye-shadow and laddered tights. No showing-off, cruising, or ogling at the bar; not much drinking either, come to that, though loads of ice-cream dis- appeared down the geriatric gullets. The two darlings next to me had seen Much Ado at the same theatre in 1952, and after the curtain, while we waited for our aisle to clear, they compared Kenneth Branagh's spirited Benedick favourably to Gielgud's more classical interpretation. Both ladies intend to come back to the Phoenix for Geraldine McEwan's As You Like It later this month.

`Though I will get it muddled up with Twelfth Night, Glynis.'

Perhaps I'll celebrate, my new year by becoming British. After all, I love this place; I've lived here for more than two decades; my only child is English; and I've never felt comfortable in the United States. It's an odd thing, however, possibly common among expatriates, that Amer- ican sirens on police cars and ambulances continue to affect me more than any others. The patriotism of alarm, you might call it, that makes those down-home sirens, and letters from the Internal Revenue Service, like the one that recently arrived out of the blue, leave me weak with dread. IRS, bogeyman of my youth, has got its eye on me and though I have no logical reason to tremble, it scares me half to death. Finance is my area of darkness. Has every American abroad but me been aware that for the past three years we are all supposed to have been filing something called 'world earning forms'? Whatever they may be. Ringing the American embassy brought no joy, of course; it never does. Our delegation is generally known among travellers as the worst-tempered In town, and least helpful to its small-fry nationals. The only time my embassy was ever civil to me was once when our man in the Seychelles invited me over for drinks, and he turned out to be an easy-going Democrat in bermuda shorts. Usually, whenever I've had to consult the embassy, I've received a blast like the one I just got over the telephone from a terminally un- lovable clerk who said she couldn't explain the US claim on income already taxed here, but if I don't get a move on about filing, next time I have to renew my passport I'll be in for 'a surprise'. My own mother has suggested I become British. And yet, I don't know. Fear of the IRS is like fear of death: too crass a reason to convert honourably.

While skimming a woman's magazine I found an astonishing statement made by an Italian feminist, Elena Belotti. 'Little Red Riding Hood, she says, 'is the story of a girl bordering on mental deficiency . • • blah . . . blah . . . blah . . . 'such foolish- ness would never have been attributed to a male.' Has Ms Belotti never heard the one about the royal foot fetishist who married the first girl he found wearing glass slip- pers? The perverted wimp.