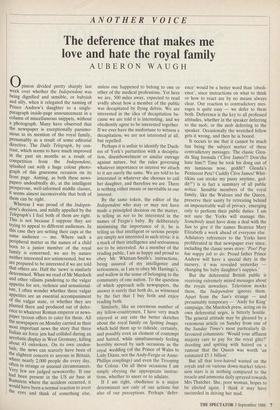 The deference that makes me love and hate the royal family

0 pinion divided pretty sharply last week over whether the Independent was being dignified and sensible, or babyish and silly, when it relegated the naming of Prince Andrew's daughter to a single- paragraph inside-page announcement in a column of miscellaneous snippets, without a photograph. Many have observed that the newspaper is exceptionally parsimo- nious in its mention of the royal family, presumably as a result of some editorial directive. The Daily Telegraph, by con- trast, which seems to have much improved in the past six months as a result of competition from the Independent, splashed out with a huge colour photo- graph of this gruesome occasion on its front page. Aiming, as both these news- papers undoubtedly do, at the intelligent prosperous, well-informed middle classes, it seems almost inconceivable that both of them can be right. Whereas I was proud of the Indepen- dent's decision, and mildly appalled by the Telegraph's I feel both of them are right. This is not because I suppose they are trying to appeal to different audiences. In this case they are setting their caps at the same audience — me. Where such a peripheral matter as the names of a child born to a junior member of the royal family is concerned, we are by nature neither interested nor uninterested, but we are prepared to be interested if we are told that others are. Half the `news' is similarly determined. When we read of Mr Murdoch and other villains pandering to the vulgar appetite for sex, violence and sensational- ism, I often wonder whether these vulgar appetites are an essential accompaniment of the vulgar state, or whether they are Planted there and produced out of defer- ence to whatever Roman emperor or news- paper tycoon offers to cater for them. All the newspapers on Monday carried as their most important news the story that three Italian air force jets had collided during an acrobatic display in West Germany, killing about 43 onlookers. On its own creden- tials, the news can scarcely have been of the slightest concern to anyone in Britain, where nearly 2,000 people die every day, often in strange or unusual circumstances. Very few are judged newsworthy. If one had been present in the US air base at Ramstein where the accident occurred, it would have been a normal reaction to avert the eyes and think of something else, unless one happened to belong to one or other of the medical professions. Yet here we are, 500 miles away, expected to read avidly about how a member of the public was decapitated by flying debris. We are interested in the idea of decapitation be- cause we are told it is interesting, and we obediently agree to be interested together. If we ever have the misfortune to witness a decapitations we are not interested at all, but repelled.

Perhaps it is unfair to identify the Duch- ess of York's parturition with a decapita- tion, disembowelment or similar outrage against nature, but the rules governing whatever importance or interest we attach to it are surely the same. We are told to be interested in whatever she chooses to call her daughter, and therefore we are. There is nothing either innate or inevitable in our interest.

By the same token, the editor of the Independent who may or may not have made a principled decision on the matter, is telling us not to be interested in the names of Fergie's baby. By deliberately minimising the importance of it, he is telling us that intelligent or serious people are simply not interested in such trivia: it is a mark of their intelligence and seriousness not to be interested. As a member of the reading public, I am as happy and proud to obey Mr Whittam-Smith's instructions, being assured of my intelligence and seriousness, as I am to obey Mr Hastings's, and wallow in the sense of belonging to the community of one nation. To the question of which approach sells newspapers, the answer is surely that both do, as witnessed by the fact that I buy both and enjoy reading both.

Similarly, like an enormous number of my fellow-countrymen, I have very much enjoyed at any rate the better sketches about the royal family on Spitting Image, which held them up to ridicule, certainly, and possibly even an element of contempt and hatred, while simultaneously feeling horribly moved by such occasions as the royal wedding (of the Prince of Wales to Lady Diana, not the Andy-Fergie or Anne- Phillips couplings) and even the Trooping the Colour. On all these occasions I am simply obeying the appropriate instruc- tions, whether to sneer or to adulate.

If I am right, obedience is a major determinant not only of our actions but also of our perceptions. Perhaps `defer- ence' would be a better word than 'obedi- ence', since instructions on what to think or how to react are by no means always clear. Our reaction to contradictory mes- sages is quite easy — we defer to them both. Deference is the key to all professed attitudes, whether in the speaker deferring to the mob, or the mob deferring to the speaker. Occasionally the wretched fellow gets it wrong, and then he is booed.

It occurs to me that it cannot be much fun being the subject matter of these contradictory messages. The classic Glen- da Slag formula (`Clive James!!! Don'cha hate him?! Time -he took his dong out of my luminous nose, geddit? Glenda's Pentecost Pets? Cuddly Clive James! Whit- tikins can stroke my pussy anytime, ged- dit?') is in fact a summary of all public notice. Sensible members of the royal family, like the Waleses and the Queen, preserve their sanity by retreating behind an impenetrable wall of privacy, emerging only to perform their public duties. I am not sure the Yorks will manage this. Somebody must have done a deal with the Sun to give it the names Beatrice Mary Elizabeth a week ahead of everyone else. Adulatory references to the Yorks have proliferated in that newspaper ever since, including the classic news story: 'Poo! Pop has nappy job to do: Proud father Prince Andrew will have a special duty in the nursery, it was revealed yesterday changing his baby daughter's nappies.'

But the deferential British public is receiving extremely mixed messages about the royals nowadays. Television mocks them, the Independent ignores them. Apart from the Sun's strange — and presumably temporary — 'Andy for King' campaign, the Murdoch press, acting on its own deferential urges, is bitterly hostile. The general attitude may be gleaned by a venomous article on Sunday from one of the Sunday Times's most particularly ill- favoured columnists: 'Would your affluent majesty care to pay for the royal glitz?' drooling and spitting with hatred on a rumour that the Queen was worth 'an estimated £5.1 billion'.

But all that love-hatred wasted on the royals and on various down-market televi- sion stars is as nothing compared to the treacle and ammonia daily sprayed towards Mrs Thatcher. She, poor woman, hopes to be elected again. I think it may have succeeded in driving her mad.