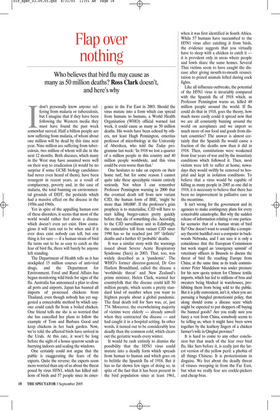 Who believes that bird flu may cause as many as 50 million deaths? Ross Clark doesn’t, and here’s why Idon’t personally know anyone suffering from malaria or tuberculosis, but I imagine that if they have been following the Western media they must have found the past week somewhat surreal. Half a billion people are now suffering from malaria, of whom about one million will be dead by this time next year. Nine million are suffering from tuberculosis, two million of whom will die in the next 12 months. Both diseases, which many in the West may have assumed were well on their way to eradication (it would be no surprise if some GCSE biology candidates had never even heard of them), have been resurgent in recent years, as a result of complacency, poverty and, in the case of malaria, the total banning on environmental grounds of DDT, the pesticide which had a massive effect on the disease in the 1950s and 1960s.

Yet in spite of the appalling human cost of these disorders, it seems that most of the world would rather fret about a disease which doesn’t even yet exist. How contagious it will turn out to be when and if it ever does exist nobody can tell, but one thing is for sure — if a human strain of bird flu turns out to be as easy to catch as the fear of bird flu, there will barely be anyone left standing.

The Department of Health tells us it has stockpiled 15 million courses of anti-viral drugs, and the Department for Environment, Food and Rural Affairs has begun monitoring wild birds for signs of the flu. Australia has announced a plan to close all ports and airports. Japan has banned all imports of processed chickens from Thailand, even though nobody has yet suggested a conceivable method by which anyone could catch flu from a boiled chicken. One friend tells me she is so worried that she has cancelled her plans to follow the example of Tom and Barbara Good and keep chickens in her back garden. Now, we’re told, the affected birds have arrived in the Urals. At this rate, it won’t be long before the sight of a house sparrow sends us hurrying indoors and sealing the windows.

One certainly could not argue that the public is exaggerating the fears of the experts. Quite the reverse; the experts seem more worried than any of us about the threat posed by virus H5N1, which has killed millions of birds and 57 people since its emer gence in the Far East in 2003. Should the virus mutate into a form which can spread from humans to humans, a World Health Organisation (WHO) official warned last week, it could cause as many as 50 million deaths. His words have been echoed by others, not least Hugh Pennington, emeritus professor of microbiology at the University of Aberdeen, who told the Today programme last week: ‘In 1918 we lost a quarter of a million people in this country and 40 million people worldwide, and this virus could be even worse than that.’ One hesitates to take on experts on their home turf, but for some reason I cannot quite take these apocalyptic visions entirely seriously. Not when I can remember Professor Pennington warning in 2000 that the eventual death toll from new variant CJD, the human form of BSE, ‘might be more than 100,000’. If the professor’s grim prophecy is to materialise, CJD will have to start killing burger-eaters pretty quickly before they die of something else. According to the CJD surveillance unit in Edinburgh, the cumulative toll from variant CJD since 1990 has so far reached just 107 ‘definite’ deaths and a further 43 ‘probable’ deaths.

It was a similar story with the warnings issued about Severe Acute Respiratory Syndrome (Sars) in 2003. That, too, was widely described as a ‘pandemic’. The WHO’s former director-general, Dr Gro Harlem Brundtland, called the disease a ‘worldwide threat’ and New Zealand’s prime minister, Helen Clark, warned her countryfolk that the disease could kill 50 million people, which seems a pretty standard kind of number when you want to frighten people about a global pandemic. The final death toll for Sars was, er, just 774. Moreover, the overwhelming majority of victims were elderly — already unwell when they contracted the disease — and had caught it in a hospital setting. In other words, it turned out to be considerably less deadly than the common cold, which clears out the geriatric wards every winter.

It would be rash entirely to dismiss the possibility that the H5N1 virus could mutate into a deadly form which spreads from human to human and which goes on to belittle the Spanish flu of 1918. But it has so far shown few signs of doing so, in spite of the fact that it has been present in the bird population since at least 1961, when it was first identified in South Africa. While 57 humans have succumbed to the H5N1 virus after catching it from birds, the evidence suggests that you virtually have to sleep with a chicken to catch it it is prevalent only in areas where people and fowls share the same homes. Several Thai victims seem to have caught the disease after giving mouth-to-mouth resuscitation to prized animals felled during cock fights.

Like all influenza outbreaks, the potential of the H5N1 virus is invariably compared with the Spanish flu of 1918 which, as Professor Pennington warns us, killed 40 million people around the world. If flu could do that in 1918, goes the theory, how much more easily could it spread now that we are all constantly buzzing around the world on aeroplanes and we import so much more of our food and goods from distant countries? The answer is almost certainly that the Spanish flu would cause a fraction of the deaths now than it did in 1918. Then, constitutions were weakened from four years of war and by the insanitary conditions which followed it. Then, most victims were left to suffer at home; nowadays they would swiftly be removed to hospital and kept in isolation conditions. To believe that a virus would be capable of killing as many people in 2005 as one did in 1918, it is necessary to believe that there has been no improvement in palliative care in the meantime.

It isn’t wrong for the government and its agencies to make contingency plans for every conceivable catastrophe. But why the sudden release of information relating to one particular scenario: that of a human strain of bird flu? One doesn’t want to sound like a conspiracy theorist huddled over a computer in backwoods Nebraska, and I am sure it is only a coincidence that the European Commission last week staged an ‘emergency summit’ of veterinary officers in Brussels to discuss the threat of bird flu reaching Europe from China, at the same time as its trade commissioner Peter Mandelson was under pressure for his new quota system for Chinese textile imports, which has led to millions of bras and sweaters being blocked in warehouses, prohibiting them from being sold to the public. But it is jolly convenient, isn’t it, when you are pursuing a bungled protectionist policy, that along should come a disease scare which might be expected to put shoppers off buying the banned goods? Are you really sure you fancy a vest from China, somebody seems to be telling us, when it might have been sewn together by the leathery fingers of a chicken farmer’s wife in Qinghai province?

It is hard to come to any other conclusion but that much of the fear over bird flu, like Sars before it, is really just the latest version of the yellow peril: a phobia of all things Chinese. It is protectionism in disguise. We fret about the deadly threat of viruses sweeping in from the Far East, but what we really fear are cockle-pickers and cheap bras.