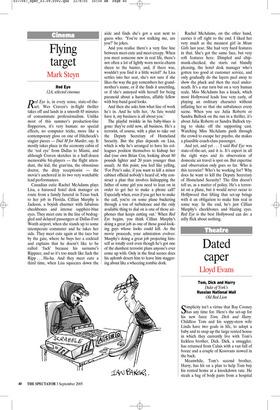 Red Eye is, in every sense, state-of-theart. Wes Craven’s in-flight thriller takes off and lands in a smooth 85 minutes of consummate professionalism. Unlike most of this summer’s production-line flopperoos, it’s very human: no special effects, no computer tricks, more like a contemporary gloss on one of Hitchcock’s stagier pieces — Dial M for Murder, say. It mostly takes place in the economy cabin of the ‘red eye’ from Dallas to Miami, and although Craven sketches in a half-dozen memorable bit-players — the flight attendant, the kid, the gran’ma, the obnoxious doctor, the ditzy receptionist — the movie’s anchored in its two very watchable lead performances.

Canadian cutie Rachel McAdams plays Lisa, a harassed hotel desk manager en route from a family funeral in Texas back to her job in Florida. Cillian Murphy is Jackson, a boyish charmer with fabulous cheekbones and intense sapphire-blue eyes. They meet cute in the line of bedraggled and delayed passengers at Dallas-Fort Worth airport, when she stands up to some intemperate commuter and he takes her side. They meet cute again at the taco bar by the gate, where he buys her a cocktail and explains that he doesn’t like to be called ‘Jack’ because his surname’s Rippner, and so it’s too much like Jack the Ripp ... Ha-ha. And they meet cute a third time, when Lisa squeezes down the aisle and finds she’s got a seat next to guess who. ‘You’re not stalking me, are you?’ he jokes.

And you realise there’s a very fine line between meet-cute and meet-creepy. When you meet someone new in real life, there’s not often a lot of lightly worn movie-charm sheen to the banter, and, if there was, wouldn’t you find it a little weird? As Lisa settles into her seat, she’s not sure if she likes the way the guy remembers her grandmother’s name, or if she finds it unsettling, or if she’s annoyed with herself for being paranoid about a harmless, affable fellow with boy-band good looks.

And then she asks him what line of work he’s in. And he tells her, ‘As fate would have it, my business is all about you.’ The playful twinkle in his baby-blues is gone: they’re cold now, all business. He’s a terrorist, of course, with a plan to take out the Deputy Secretary of Homeland Security. But the plan depends on Lisa, which is why he’s arranged to have his colleagues position themselves to kidnap her dad (our own Brian Cox, looking about 80 pounds lighter and 20 years younger than usual). At this point, you feel like yelling, ‘For Pete’s sake, if you want to kill a minor cabinet official nobody’s heard of, why construct a plan that involves kidnapping the father of some girl you need to lean on in order to get her to make a phone call? Especially when, even if you get her to make the call, you’re on some plane bucketing through a ton of turbulence and the only available thing to dial on is one of those airphones that keeps cutting out.’ When Red Eye begins, you think Cillian Murphy’s doing a great job as one of those good-looking guys whose looks could kill. As the movie proceeds, your admiration evolves: Murphy’s doing a great job projecting himself as totally cool even though he’s got one of the dumbest terrorist plans anyone’s ever come up with. Only in the final scenes does his aplomb desert him to leave him staggering about like a wheezing zombie dork. Rachel McAdams, on the other hand, carries it off right to the end. I liked her very much as the meanest girl in Mean Girls last year. She had very hard features in that. She’s got the same face, but very soft features here. Dimpled and chipmunk-cheeked, she starts out blandly pleasing, the hotel desk manager who’s gotten too good at customer service, and only gradually do the layers peel away to show the pluck and then the steel underneath. It’s a star turn but on a very human scale. Miss McAdams has a knack, which most Hollywood leads lose very early, of playing an ordinary character without inflating her so that she unbalances every scene. When you see Julia Roberts or Sandra Bullock on the run in a thriller, it’s about Julia Roberts or Sandra Bullock trying to shake off the supporting cast. Watching Miss McAdams push through the crowd to escape her psycho, she makes a plausible coach-class passenger.

And yet, and yet ... I said Red Eye was state-of-the-art, and it is. It’s expert in all the right ways and its observation of domestic air travel is spot on. But expertise and observation only goes so far. Who is this terrorist? Who’s he working for? Why does he want to kill the Deputy Secretary of Homeland Security? The film doesn’t tell us, as a matter of policy. He’s a terrorist on a plane, but it would never occur to Hollywood that lifting that set-up brings with it an obligation to make him real in some way. In the end, he’s just Cillian Murphy’s cheekbones and blazing eyes. Red Eye is the best Hollywood can do: a nifty flick about nothing.