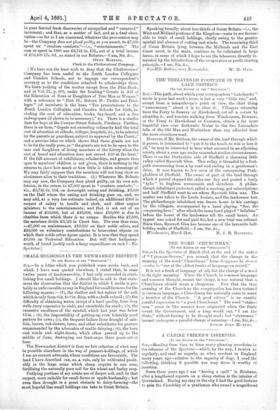 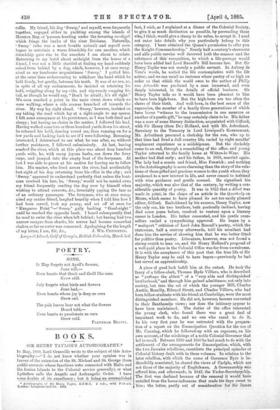 PTO THE EDITOR OF THE " SPECTATOR.")

SIR,—Reading from time to time many pleasing anecdotes in the columns of the Spectator—which, by the way, I receive as regularly, and read as eagerly, as when resident in England many years ago—relative to the sagacity of dogs, I send the following, thinking it possible you may deem it worthy of insertion.

Some three years ago I was "having a spell" in Brisbane, after a lengthened sojourn on a sheep station in the interior of Queensland. During my stay in the city I had the good-fortune to gain the friendship of a gentleman who owned a magnificent collie. My friend, his dog Sweep,' and myself, were frequently together, engaged either in yachting among the islands of Moreton Bay, or 'possum-hunting under the towering eucalypti which fringe the banks of the river Brisbane. Naturally, Sweep' (who was a most lovable animal) and myself soon began to entertain a warm friendship for one another, which friendship gave rise to the anecdote I am about to relate. Returning to my hotel about midnight from the house of a friend, I was not a little startled at finding my hand suddenly seized from behind by a dog, which, however, I at once recognised as my handsome acquaintance Sweep.' I patted him, at the same time endeavouring to withdraw the hand which he held firmly, but gently, between his teeth. It was of no use, as, in spite of all my endearments, he insisted on retaining his hold, wriggling along by my side, and vigorously wagging his tail, as though he would say, " Don't be afraid ; it's all right." We soon reached a point in the main street down which we were walking, where a side avenue branched off towards the river. My way lay right ahead. Sweep,' however, insisted on my taking the road which lay at a right-angle to my cpurse. I felt some annoyance at his persistence, as I was both tired and sleepy; but having no choice in the matter, I followed his lead. Having walked some two or three hundred yards down his street, he released his hold, dancing round me, then running on for a few yards and looking back to see if I were following. Becoming interested, I determined to see' what be was after, so, without further resistance, I followed submissively. At last, having reached the river, which at this place was about four hundred yards wide, he, with many joyous barks, ran down the ferry steps, and jumped into the empty boat of the ferryman. At last I was able to guess at his motive for forcing me to follow him. His master, who lived across the river, had accidentally lost sight of his dog returning from his office in the city ; and Sweep' appeared to understand perfectly that unless the boatman received his fare, be, Sweep,' would not be carried over, my friend frequently sending the dog over by himself when wishing to attend concerts, &c., invariably paying the fare as of an ordinary passenger. The ferryman, who at once recognised my canine friend, laughed heartily when I told him how I had been served, took my penny, and set off at once for " Kangaroo Point "—' Sweep' gaily barking " Good-night " until he reached the opposite bank.. I heard subsequently that he used to swim the river when left behind; but having had two narrow escapes from sharks, his nerves had become somewhat shaken so far as water was concerned. Apologising for the length of my letter, I am, Sir, &c., J. WM. CREIGHTON. Lasqueti Island, Gulf of Georgia, British Columbia, March 3rd.