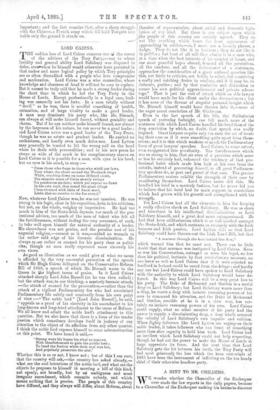 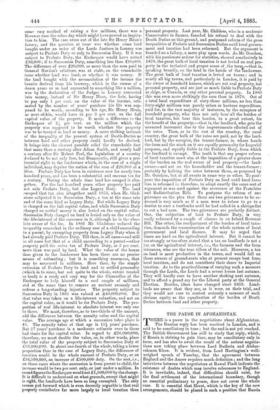 A HINT TO MR. CHILDERS.

WE wonder whether the Chancellor of the Exchequer ever reads the law reports in the daily papers, because to a Chancellor of the Exchequer racking his brains to discover some easy method of raising a few millions, there was a Revenue case the other day which might have proved an inspiration to him. The case arose out of the late Sir Henry Meux's lunacy, and the question at issue was whether some land bought under an order of the Lords Justices in Lunacy was subject to Probate Duty or only to Succession Duty. If it was subject to Probate Duty, the Exchequer would hare netted £30;000 ; if to Succession Duty, something less than £10,000. The difference of over £20,000, or more than the sum paid to General Gordon's relations, was at stake, on the remarkable issue whether land was land, or whether it was money. If the land bought with the accumulation of the income the lunatic derived from his brewery, which in the course of a dozen years or so had amounted to something like a million, was by the declaiation of the Judges in Lunacy converted into money, instead of Sir Henry Meux, the heir, having to pay only 1 per cent. on the value of the income, estimated by the number of years' purchase his life was supposed to be worth, according to his age, Sir Henry Meux, as next-of-kin, would have to pay 3 per cent. on the full capital value of the property. It made a difference to the Exchequer of 2& per cent. on the million which the property was supposed to be worth whether the property was to be treated as land or money. A more striking instance of the inequality of the present system of Death-Duties as between land and other property could hardly be devised. It brings into the clearest possible relief the remarkable fact that more than a century after Adam Smith, and nearly half a century after Sir Robert Peel, the legislation of a country declared to be not only free, but Democratic, still gives a preferential right to the landowner which, in the case of a single individual, may deprive the nation of the sum of £26,000 at a blow. Probate Duty has been in existence now for nearly two hundred years, and has been a substantial and onerous tax for a century. During the whole time land has escaped it altogether. For the last hundred years other property has paid not only Probate Duty, but also Legacy Duty. The land escaped that tax also altogether until 1853, when Mr. Gladstone subjected it to Succession Duty, a tax at the same rate and of the same kind as Legacy Duty. But while Legacy Duty is charged on the full capital value, and while Succession Duty charged on settled money is also levied on the capital value, Succession Duty charged on land is levied only on the value of the life-interest of the successor in it, although he is the absolute owner of the fee. In 1881 Mr. Gladstone reduced the inequality somewhat in the ordinary case of a child succeeding to a parent, by exempting property from Legacy Duty when it had already paid Probate Duty. Till then, in all cases—and still in all cases but that of a child succeeding to a parent—other property paid the extra tax of Probate Duty, or 3 per cent. more than was paid by land. What the value of the bonus thus given to the landowner has been there are no precise means of estimating ; but it is something enormous, that may be measured in millions. Here then, by the simple extension of Probate Duty to land and to settled personalty (which is to some, but not quite to the whole, extent treated as land) is a ready and easy way for the Chancellor of the Exchequer to help himself to a cool couple of millions, and at the same time to remove an ancient anomaly and redress a long-standing injustice. The property subject to Succession Duty in 1883 was valued at £40,000,000. But that value was taken on a life-interest valuation, and not on the capital value, as it would be for Probate Duty. The proportion of real life-interest to absolute interest was only one to three. We must, therefore, as to two-thirds of the amount, add the difference between the annuity value and the capital value. The average age at which a succession takes place is 4G. The annuity value at that age is 13i years' purchase. But 27 years' purchase is a moderate estimate even in these bad times for the capital value. In regard to £26,000,000, therefore, we must double the value, or, in other words, place the total value of the property subject to Succession Duty at £66,000,000. In about one-fourth of the whole, taking a lower proportion than in the case of Legacy Duty, the difference of taxation would be the whole amount of Probate Duty, or on £16,500,000, an increase of £500,000 duty. On the rest, i.e., on those cases where the succession is from parent to child, the increase would be two per cent. only, or just under a million. In round figures the Exchequer would net 11,500,000 by the change. It is difficult to understand on what grounds, except that might is right, the landlords have been so long exempted. The only reason put forward which is even decently arguable is that real property contributes far more largely to local taxation than

' personal property. Last year, Mr. Childers, who is a moderate Conservative in finance, founded his refusal to deal with the Death Duties on this ground, and postponed refoim of the gross

inequalities of Probate and Succession Duties until local government and taxation had been reformed. But the argument is

founded on a fallacy, a mere play upon words. As Mr. Goschen, with his passionate ardour for statistics, showed conclusively in 1870, the great bulk of local taxation is not levied on real pro perty in the technical and proper sense of, the term,—that is, speaking broadly, on the land in the hands of the landowner. The great bulk of local taxation is levied on towns ; and in nearly all big towns, and particularly in London, it is paid by the owner of leasehold houses, which are not real property, but personal property, and are just as much liable to Probate Duty

as ships, or Consols, or any other personal property. In 1880 this was even more strikingly the case than in 1870. Out of a total local expenditure of sixty-three millions, no less than forty-eight millions was purely urban or harbour expenditure, paid for, in the vast majority of instances, by the occupiers of leasehold property, who thus not only bear all the burden of local taxation, but bear this burden, to a great extent, for the benefit of the property,—that is, the landlord, who gets the unearned increment due to the improvements effected out of the rates. Then, as to the rest of the country, the rural country, the great bulk of the rates are paid, not by the landlord, but by the occupier, the tenant-farmer, in whose hands the farm and the stock on it are equally personalty for Imperial purposes, and equally liable to the Probate Duty, from which the landlord is exempt. The truth is that any proper reform of local taxation must aim at the imposition of a greater share of the burden on the real owner of real property—the landowner—and not on the householder and the tenant-farmer ; probably by halving the rates between them, as proposed by Mr. Goschen, but at all events in some way or other. To postpone the imposition of Probate Duty on land until local taxation is reformed is, therefore, to adopt exactly the same sort of argument as was used against the severance of the Franchise and Redistribution Bills. To postpone the reform of one grievance on the plea that there are two grievances to be redressed is very much as if a man were to ief use to go to a dentist to cure a toothache until he had called-in a chiropodist to cut a bad corn. The two grievances are perfectly distinct. One, the subjection of land to Probate Duty, is very easily redressed by a couple of clauses in an Inland Revenue Bill. The other, the readjustment of the burden of local taxation, demands the reconstruction of the whole system of local government and local finance. It may be urged that times are hard on the agricultural interest. But it cannot be too strongly or too often stated that a tax on landlords is not a tax on the agricultural interest, i.e., the farmers and the farm labourers, who are the true tillers of the soil. Moreover, a tax on land is most productive in the towns, and would fall on those owners of ground-rents who at present escape best from local taxation, and do not contribute their share to Imperial taxation. As to the practicableness of carrying such a measure through the Lords, the Lords had a severe lesson last autumn. They will hardly care to have another shaking next autumn, and to afford a grand cry for the Liberal party at the General Election. Besides, ideas have changed since 1853. Landlords are aware that they are, as it were, on their trial, and they would not care to contest seriously a measure of such obvious equity as the equalisation of the burden of Death Duties between land and other property.