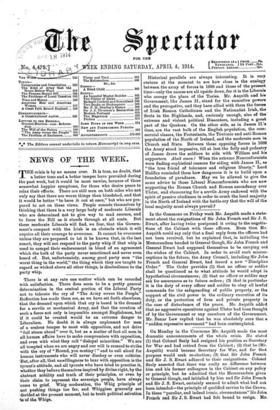 Page 1, 4 April 1914 — Historical parallels are always interesting. It is very curious at
Close

Historical parallels are always interesting. It is very curious at

the moment to see bow close is the analogy between the array of forces in 1688 and those of the present time—only the names are all upside down, for it is the Liberals who occupy the place of the Tories. Mr. Asquith and his Government, like James II., stand for the executive powers and the prerogative, and they have allied with them the forme of Irish Roman Catholicism and the Nationalist Irish, the Scott in the Highlands, and, curiously enough, also of the extreme and violent political Disaenters, including a great part of the Quakers. On the other side, as in James II.'s time, are the vast bulk of the English population, the com- mercial classes, the Protestants, the Teutonic and anti-Roman population of the North of Ireland, and the moderate men in Church and State. Between these opposing forces in 1688 the Army stood impassive, till at last the folly and pedantry of James drove the soldiers to side with William and his supporters. Absif omen! When the extreme Nonconformists were finding sophistical reasons for siding with James II., as "the true friend of tolerance and religious liberty," Lord Halifax reminded them how dangerous it is to build upon a foundation of paradoxes. May we be allowed to give the same advice to those Liberal Nonconformists who are now supporting the Roman Church and Roman ascendancy over Ulster, and clamouring for a servile Army endowed with the spirit of passive obedience in order to crush the local majority in the North of Ireland with the battle-cry that the will of the local majority must always prevail P