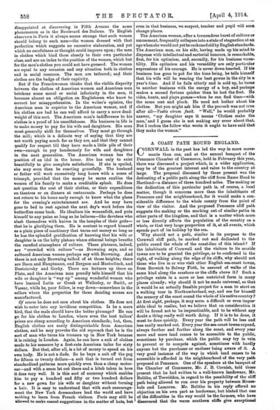 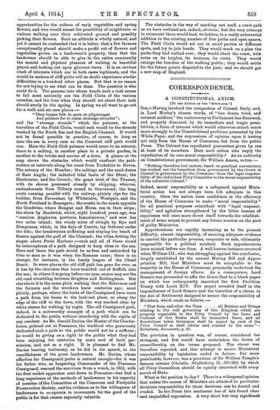 A COAST PATH ROUND ENGLAND.

CORN WALL in the past has led the way in more move• ments than one, and at the annual banquet of the Penzance Chamber of Commerce, held in February this year, there was discussed a project which, in a wider application, may he of the greatest interest and value to the country at large. The proposal discussed by those present was the dedicating of a public path along the cliff from Rame Head to Hartland—a distance of three hundred miles. The making or the dedication of this particular path is, of course, a local matter, though it concerns more than the inhabitants of Penzance and the neighbourhood, for it would make a con- siderable difference to the whole county from the point of view of the visitor. And the proposed Penzance cliff path suggests the making or the marking out of similar paths in other parts of the kingdom, and that is a matter which more or less directly affects the population of the country as a whole, or that very large proportion of it, at all events, which spends part of its holiday by the sea.

Why should not a path, similar in its purpose to the Cornwall cliff path, be marked out and dedicated to the public round the whole of the coast-line of this island ? If the inhabitants of Cornwall and the visitors to its seaside towns are to be granted the privilege, or be confirmed in the right, of walking along the edge of its cliffs, why should not those who live in or who visit other English sea-coast towns, from Berwick to Solway Firth, be assured of walks of the same kind along the seashore or the cliffs above it P Such a privilege exists in a more or less restricted form in many places already; why should it not be made universal, so that it would be an actually feasible project for a man to start on a walking tour in Northumberland, say, and see for himself the scenery of the coast round the whole of his native country P At first sight, perhaps, it may seem a difficult or even impos- sible ideal to realize, but we believe that on consideration it will be found not to be impracticable, and to be without any doubt a thing really well worth doing. If it is to be done, it must be done quickly. Every year the path will be less and less easily marked out. Every year the sea-coast towns expand, always further and further along the coast, and every year more and more land ceases to be accessible to tho public, sometimes by purchase, which the public may try in vain to prevent or to compete against, sometimes with hardly anyone but the purchaser or encloser being aware of it. A very good instance of the way in which land ceases to be accessible is afforded in the neighbourhood of the very path proposed at Penzance. One of the speakers at the banquet of the Chamber of Commerce, Mr. J. B. Cornish, told those present that he had written to a well-known landowner, Mr. Bolitho, of Trewidden, in regard to the possibility of the cliff path being allowed to run over his property between MINIM. hole and Lamorna. Mr. Bolitho in his reply offered no objection on his own part as landowner, but hinted that one of the diffioulties in the way would be the farmers, who have discovered that the warm southern cliffs give exceptional

opportunities for the culture of early vegetables and spring flowers, and who would resent the possibility of neighbours or visitors walking over their cultivated ground and possibly pioking their flowers. Such an attitude is wholly natural, and yet it cannot be contended that it is better that a few farmers exceptionally placed should make a profit out of flowers and vegetables grown on a landowner's property, than that the landowner should be able to give to the entire community the mental and physical pleasure of walking in beautiful places and looking out upon glorious views. It is an obvious clash of interests which are in both cases legitimate, and the would-be makers of cliff paths will no doubt experience similar difficulties in a hundred other places. But that is no reason for not trying to see what can be done. The question is who could do it. The persona into whose bands such a task seems to fall most naturally are the Field Clubs of the various counties, and the time when they should set about their task should surely be the spring. In spring we all want to go out for a walk and see new places :— " Than longen folk to goon on pilgrimages And palmers for to seken straunge strondes ";

and the "strange strands" which the palmers, or the travellers of the Field Clubs, would seek would be the strands washed by the North Sea and the English Channel. It would not be found possible in practice, of course, to keep as near the sea in every case as the Cornwall cliff path would run. Here the Field Club palmers would come to an estuary, there to a salting, in another place to a private garden, in another to the bricks and mortar of a town. A glance at the map shows the obstacles which would confront the path- makers at intervals along the coast from Yorkshire to Devon, The estuary of the Humber ; the saltings and the sand-dunes of East Anglia ; the indented tidal basin of the Stour, the Blackwater, and the Crouch ; the great inlet of the Thames, with its shores possessed already by shipping, wharves, embankments from Tilbury round to Gravesend ; the long route running parallel with the railway, plainly ripe for the builder, from Faversham by Whitstable, Westgate, and the North Foreland to Ramsgate; the creeks in the sands opposite the Goodwins, where Hengist and Horsa ran in their ships ; the shore by Sandwich, which, eight hundred years ago, was "omnium Anglorum portuum famosissimus," and now lies two miles inland; the windy miles of shingle by Rye and Dungeness, which, in the days of Canute, lay fathoms under the tide; the breakwaters stiffening and staying the beach of Sussex against the pull of the Channel; the villas dotting the slopes above Poole Harbour;—each and all of these would be interruptions of a path designed to keep close to the sea. Here and there the path would be as free and untouched by time or man as it was when the Romans came ; there is no change, for instance, in the lonely league of the Chesil Beach. In some places the old cliff path has gone for ever, as it has by the churches that have tumbled out of Suffolk into the sea; in others it is going before our eyes, as you may see the old road crumbling between Brighton and Rottingdean. But elsewhere it is the same plain walking that the fishermen and the farmers and the wreckers knew centuries ago; most plainly, perhaps, where the boots of the Coastguard have worn a path from his house to the look-out place, or along the edge of the cliff to the town, with the way marked clear by white stones for walking by night. The old Coastguard path, indeed, is a noteworthy example of a path which can be dedicated to the public without interfering with the rights of any resident. As Mr. Gerald Davies, the Master of the Charter- house, pointed out at Penzance, the landlord who generously dedicated such a path to the public would not be a sufferer ; he would be giving as a right to the public what they had been enjoying for centuries by some sort of tacit per- mission, and not as a right. It is pleasant to find Mr. Davies bearing testimony, as he did in his speech, to the unselfishness of the great landowners. Mr. Davies, whose affection for Coastguard paths is natural enough—for it was his father who, as Inspecting Commander of the Penzance Coastguard, rescued the survivors from a wreck, in 1&51, with the first rocket apparatus sent down to Penzance—has had a long experience of the methods of landowners in his capacity of member of the Committee of the Commons and Footpaths Preservation Society, and his evidence as to the willingness of landowners to co-operate in movements for the good of the public is for that reason especially valuable.

The obstacles in the way of marking out sucfi a coast path as we have outlined are, indeed, obvious; but the very attempt to surmount them would lead, we believe, to a really substantial addition to the existing number of free paths and open spaces. The Field Clubs would set out in small parties at different spots, and try to join hands. They would mark on a plan the paths they had walked over; they would chart the coast, with notes on its heights, its terraces, its views. They would enlarge the freedom of the walking public; they would settle for the future points disputed in the past; and we should get a new map of England.